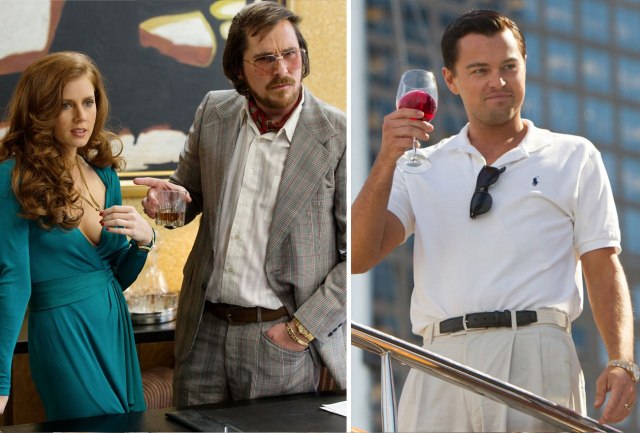 Winter break was a blast of fresh air after several long weeks of school, and by fresh air I mean negative forty degree air. Still, during our long break I was privy to watch both American Hustle, directed by the David O. Russell (that rhymed) and The Wolf of Wall Street directed by Martin Scorsese. It is hard to put into words these two movies, both are brilliantly written stories of greed, vice, and fake Northeastern accents- yet they inhabit completely different hemispheres in the movie world.

American Hustle stars Christian Bale, who- like some sort of theatrical virus, continuously evolves strange new shapes in order to invade every movie he can touch. Gone is the rogue-like, macho Batman. Bale’s current protein coat is that of an overweight, sleezeball Conman. Although Bale’s purposeful stoop and weight gain caused a plethora of health problems for the actor, it causes no problems for the movie. Everything about American Hustle feels crisp and thought out, albeit slightly stereotypical. There is, of course, the Italian mafia involved in some slimey political scandal, the innocent beauty (Jennifer Lawrence) who is not as innocent as she seems and the brilliant crime artist anti-hero. My only qualm with the movie is that its complexity picks up fast. I recommend having the Wikipedia page for the plot open on your phone in the movie theater just in case Bale’s obnoxious toupee diverts your attention for a split second as the plot shoots past you like a Chinese bullet train. Still, American Hustle is an entertaining movie, one that will leave your thoughts racing just as hard as your heart. I recommend it to anyone who has access to Wikipedia in a movie theater.

Now onto the dusey, The Wolf of Wall Street. If you’ll forgive my mythological analogy- American Hustle is like Hera, a clean, beautiful, intelligent god of a movie. The Wolf of Wall Street is Atlas, carrying on its back a monstrous budget and crazy source material. But in this case, Atlas shrugged, for The Wolf of Wall Street does not seem to care for any form of sensibility or storytelling convention. It is a wild vortex of cocaine, sex, more cocaine, and then credits. The story follows a stockbroker named Jordan Belfort played by Leonardo DiCaprio. Jordan, during the 1990s, made copious amounts of money convincing investors that “penny-stocks”, worthless investments in companies that barely even existed, had a huge return. After we are introduced to why Belfort made so much money, the rest of movie is how he spent his money, hint- Leonardo DiCaprio gets paid to deliver lines, Belfort pays to receive them, nasally. That’s about it. Sure the police go after him, but that is merely a footnote tagged onto this strange three hour tale that is basically Project X in a brokerage firm. This is a film that broke the record for the amount of times the F-word was used per minute (2.81 Fk/m). It is so obscene that it is one frame away from being rated NC-17. It does not have much of a moral either; Jordan doesn’t really pay for any of his excess. Neither did the movie- it was a box office success and currently has an 8.7 on IMdB. But hidden under the beach-worth of cocaine that coats the plot there is a deeper message; if you have enough money, you can do anything. I’m sure Martin Scorsese thought of that mantra when making the film. The Wolf of Wall Street proves that with enough of a budget, a shallow plot of drugs and sex can be made into a Hollywood hit. The Wolf of Wall Street is, despite its shortcomings, a beast to behold, a monstrous- kaiju-sized film whose sweat soaked tentacles drag you in like the throes of a morphine addiction.  I would recommend The Wolf of Wall Street to anyone with the stomach to handle such a movie, for like the drug-addled nausea of an ayahuasca trip- one can never emerge the same.

“So” you’re probably wondering, “what movie should I see?” If you really want to know which film suits your interests, ask yourself this simple question. “Would I rather go to the Vatican- or an orgy tent at Burning Man?” If you chose the Vatican you will enjoy the Hustle; clean, with a beautifully constructed plot that is as astounding as it is predictable. If on the other hand, if you prefer to go knee deep into a writhing mass of obscenity, whether for entertainment or a spiritual journey, I would suggest the Wolf. If you don’t want to go to any of those places and would prefer to sit on your couch all day watching Breaking Bad on Netflix while eating microwave popcorn that is probably as good for you as blue meth, then I would suggest The Room by Tommy Wiseau. Either way, happy watching.