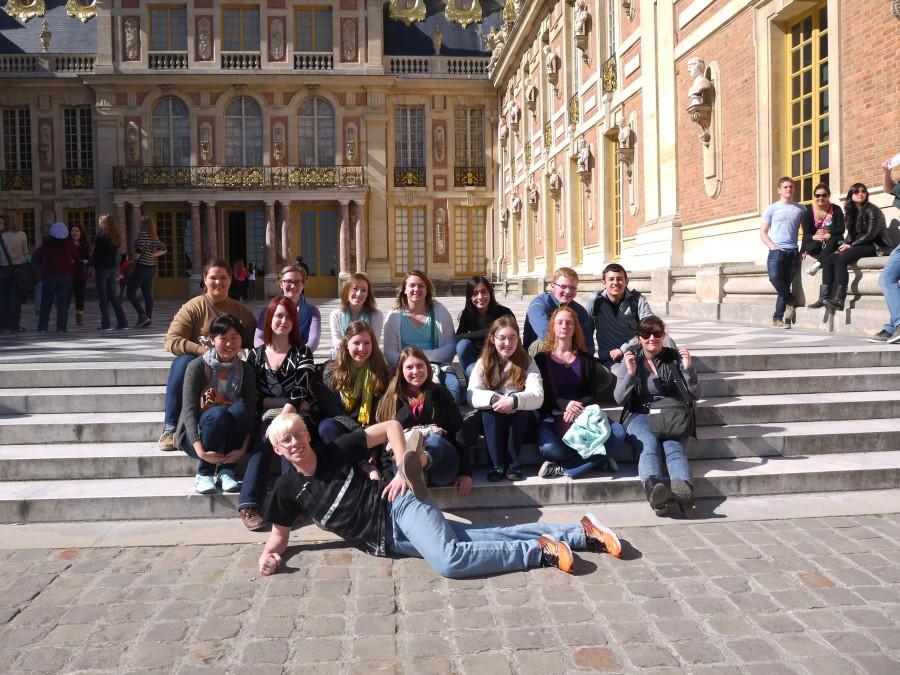 As a part of the foreign language program, I went to France for two weeks with 14 other students and two teachers.  It is safe to say that it is one of the best experiences I have ever had. There were so many new and different things, and being put in that situation made me a much more mature person. I would like to share experience, advice and comments in a list format, and hopefully this will encourage you go to France someday.

In Paris, you walk a lot.

Every single person who went on the France trip can probably sum up Paris in one word: walking. You do a lot of it, and the majority of it is on cobblestone. You may scoff at me, but this is actually quite excruciating. However, the walking (or limping after a while) is all worth it since everything in France is so beautiful. In fact, my neck hurt as well because of having my trusty camera named Yoko around my neck, prepared for a photo opportunity at all times. Here are some pictures I took while hobbling around the streets of Paris.

Learn how to work in a group.

Let’s face it, we all have our differences. But in France (or if you go anywhere else with a group), I would recommend putting all of your differences behind you. Put the group before yourself is the most cliché saying ever, but it is especially true in one of the biggest (and sketchiest) cities in the world. Sometimes straying off on your own can be a really bad idea, which segways really nicely into my next point…

It is a very frightening experience, and I can say that because I got lost on the Metro, which is Paris’ underground subway system. After a misunderstanding, I got on to the platform without my groupmates. After stupidly looking around for a few moments, I realized that they were still on the train, looking at me in horror. Luckily, one of my groupmates gestured me to stay at the station, and I sulked on a bench until they came back to the stop where I was at. The moral of the story is to not make impulse decisions and run off on your own. It’s an extremely different environment, and you don’t have you all mighty phone to come to your rescue.

Learn how to use circumlocution.

After you go off into your home stay with a French family, you are basically on your own for a while. It is a difficult transition, since you were with the same people for a long time, and you don’t have a backup person to ask a question about French. The main difficulty is usually communication. This is where your very nice friend circumlocution comes in. Don’t be afraid to sound like an elementary schooler trying to talk, and use basic words and wild gestures to get your point across. Even if you are wrong, there are always mighty translation apps to aid you. But first, you’ll need to figure out how to say “I would like to use a translator…” There are so many moments when you struggle, but in the end it helped me improve as a French speaker.

Be open to change.

France is quite different from Iowa. It can get quite overwhelming, but don’t let that get the best of you. Step out of your comfort zone and try something new, like escargot (which is surprisingly good for the first bite) and appreciate the culture.

This isn’t limited to food. If it wasn’t for my group, I would have never gone to the Salvador Dali Museum and the Orangerie. Now I appreciate art and its beauty so much more now. Having an open mind helped me enjoy the trip much more and learn so many things about France to share.

Don’t be afraid to look like a tourist and take a bunch of photos. Everything from France is so old and aesthetically pleasing, and no amount of gigabytes can ever completely document its beauty. Even the little streets look wonderful. So don’t be shy and let your inner artsiness out. Here are a few of my pictures that are of simple things in France.

My last piece of advice comes with caution. Smiling at people in French culture is considered creepy, and it’s weird in any culture to laugh like a hyena all the time. I ask you to smile so you can live in the moment and take full advantage of the fact that you are in one of the most beautiful countries in the world (that is a completely biased opinion). Trying to be happy and have a positive attitude was also really great when we missed our last flight home…

Every part of France is filled with history, and two weeks was not enough to go to everywhere that I wanted to. I am so thankful for this experience, and I would like to thank Madame Juhl and Madamoiselle Wiesley for their hard work, dedication and tolerating a crazy group of people. To prove my point, here is the only picture where everybody is actually looking at the camera.

Just to make you want to go to France more, here are photos of iconic tourist places around Paris.