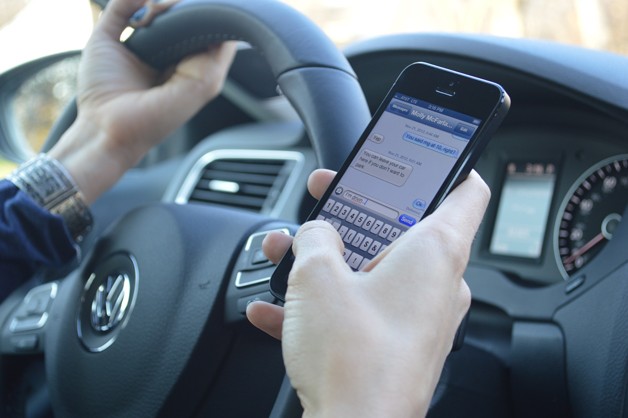 You’re driving along when you hear your phone vibrate. You’ve been waiting for this important text all day, and it will only take five seconds to read. Only five seconds. Five seconds of risk.  Five seconds that could cost a life. You check your message, and look up to see a car coming head on. There’s a loud crash, then everything goes black. Could it have waited?

It’s apparent how attached our generation is to social media, it is both a benefit and detriment of society. Although the need for quick communication is what we’ve all come to depend on, it is also what has come to distract us. In the past few years the annual number of car accidents linked with cell phones has skyrocketed. In 2011, there were 1.3 million crashes involving cell phones. “I think it’s dangerous, but I have a phone addiction,” said Mykayla Strunk 16’.

Although these two students at West High weren’t involved in texting and driving accidents, they were both involved in collisions and were open to sharing the experience with us. “Being in an accident definitely affects how I drive now, I’m more cautious when I drive, even though I wasn’t the one driving when the accident happened,” said Hannah Krupp ‘17. Krupp points out that even if you aren’t the driver during an accident, it can still endanger you and the others around you.

Cole Enyart ‘17 who has been involved in two accidents close together has similar views. “The accident made it so I had a lot less freedom, and it made me value life more because of how intense it was,” Enyart said.

The intensity and impact of an accident could affect not only you but your whole community. There are various ways to try and avoid texting and driving, although many don’t seem beneficial. One idea to prevent texting and driving, is “#x”. When you’re in the midst of a conversation but need to drive, use #x as a short way tell your friends, or whoever you’re talking to know that you’re driving and can’t text. It serves as a simple way to show you’re not ignoring them, and that you are keeping yourself safe and alert on the road.

Staying alert on the road is a big struggle for not only teens, but adults too. Parents are always telling their kids not to text and drive when they might have the same issue themselves.

Enyart ’ added,”Even if you’re trying to get somewhere fast, don’t do anything stupid that could risk your life like speeding, running stop signs, and even trying to make yellow lights.”

Both agree that it just isn’t worth risking your life, or someone elses.”