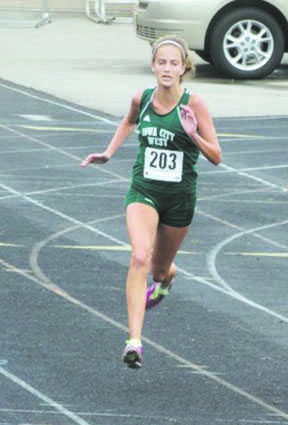 After a third place finish at the cross country state championships on Nov. 1 Bailey Nock ’18 was named the Press-Citizen cross country athlete of the year earlier this week. “I feel completely thankful [to be named cross country athlete of the year] ” Nock said. As for the state championship race that help aid Nock to attaining the award she says, “It was through God that I ran the way I did, and I’m just glad to have the opportunity of being on the cross country team.” Throughout the season Nock transformed as a runner, she went from placing fourth at the team time trial in late August to placing third at the state championships in November. “One of the key things that led to [my] success I would say was support. I would’ve never been able to believe in myself enough to think that I could do the things that I did without the support of my coaches and teammates. They helped me realize how much potential I have.” With that potential Nock is planning on competing in track and field in the spring and cross country next fall, “In the future I hope to help my team win state in both cross country and track. Individually a lot could happen in a couple months so I hope to keep doing my best and improving.” Nock said.