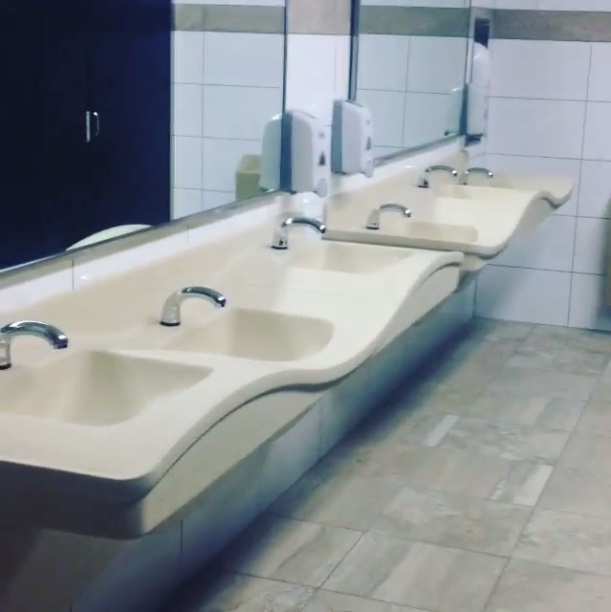 Following the construction of some new restrooms, the WSS editorial board looks at the facilities that over two-thousand users take for granted every day.

There they are, right outside the main gymnasium. So fresh, so sleek, so blue, so clean. If you haven’t noticed them yet, you’ve probably never been to a sporting event to know I mean.

We are, of course, talking about West High’s new restrooms that are finally operational.

It’s often more newsworthy to criticize facilities than it is to praise them. The parking lots, front lawn, and lack of air conditioning are frequent targets of this newspaper’s criticism. Against the grain of the effort to point out everything that could be improved about West High, this piece is an attempt to give praise where it is due.

WSS editorial board voted in favor of the idea.

West High’s custodial staff does a fantastic job maintaining the school’s 36 bathrooms. If we were to voice any complaints about these facilities, it would be against how poorly some of our peers treat them. (How is it that so many people forget basic etiquette as soon as they use public facilities????)

Grievances about icky teenagers aside, we are grateful to go to such a well-maintained high school. Even the oldest wing West is as modernized for the 21st century as the new additions are. The engineering lab, some fifty years old, has state-of-the-art technology, just like the recently updated band wing does.

But while we’re on the topic of modernization, there are still a few things that we think could make these facilities just a bit better.

The first: Install “StepNPull” door openers. These are small metallic attachments that can screw into doors near the floor. For all of the bathrooms with “pull open” doors, these attachments would eliminate the need for restroom users to touch the door handle as they exit. Door handles are full of germs. Just consider how few people wash their hands after using the bathroom. For people that actually want clean hands, which should be everybody, “StepNPull”s are a simple, cheap upgrade to make. With over two-thousand people walking through West High everyday, washing one’s hands isn’t just a matter of convenience, it’s a matter of public health.

Yes, West High’s facilities aren’t perfect. But then again, what facilities are? We, the members of WSS editorial board, commend the custodians on their hard work in keeping our facilities clean and current. We just wish our fellow students would do the same.