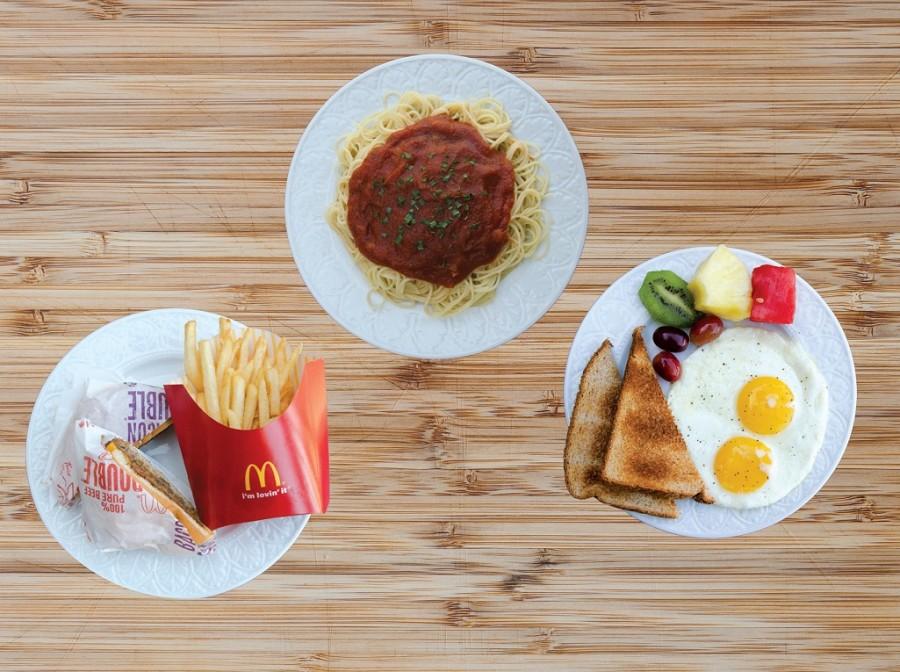 In the world of competitive sports everything counts; every push-up, sit-up, hour of sleep, extra mile, and even what you eat. The diets that athletes have are almost as important as the physical activity that goes into preparing for the season. Athletes have to watch what they eat, when they eat it, and how much to eat. These dietary regimens, that are present in the daily lives of athletes, change across various sports. West Side Story investigates the diets of athletes in different sports.

Will Scott
Swimming
Swimmers are notorious for having outrageous diets. For example, Michael Phelps eats almost 12,000 calories a day. Although Will Scott ’16 isn’t quite in the 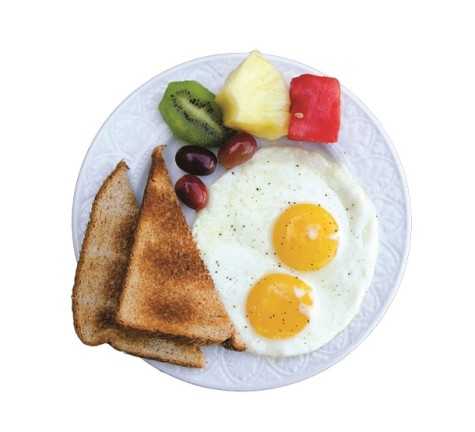 12,000 calorie range, his diet is still quite impressive.

“You need something [food] to burn. That’s really the most important thing about swimming,” Scott said, “you need it to burn.”
Scott’s diet encompasses lots of different foods, which vary with each meal and the day’s activity accordingly.
“Usually my mom makes me some sort of egg nutrition for breakfast so that’s really kind of her to do that for me.” Scott said, “Lunch is the hardest part for me though since I am at school, I have to stay away from certain foods.”
When it comes to a go to source of energy, chocolate milk is perfect for Scott’s training regiment.
“It’s really excellent. All the sugars and also the protein really helps for you to recover from really tough workouts as well as prepare you for the day.”

Zach McClean
Baseball and golf
Although Zach McClean ’16 is a dual sport athlete (baseball and golf), he does not pay much attention to his food intake.
McClean focuses more on physical activity than what he is eating every day.
“I honestly eat whatever I have most of the time.”
McClean also finds that he has developed eating habits.
“Almost every Tuesday I go to Taco Johns or Cactus for Taco Tuesday.”
McClean doesn’t have a very intricate diet, but his diet does change slightly when he shifts to playing baseball.
“For golf I don’t really change my diet or I am not sure if I even have one during golf season.” McClean said, “For baseball I usually try to eat more vitamins, but it’s a little different since I don’t have to grind on school lunch since it’s summer.”

Olivia Moore
Cross country and track
Unlike wrestlers or swimmers, the runner’s diet isn’t to eat an excessive amount of food, but to pick and choose what to eat and when. Olivia Moore ’17 is a master at this method. 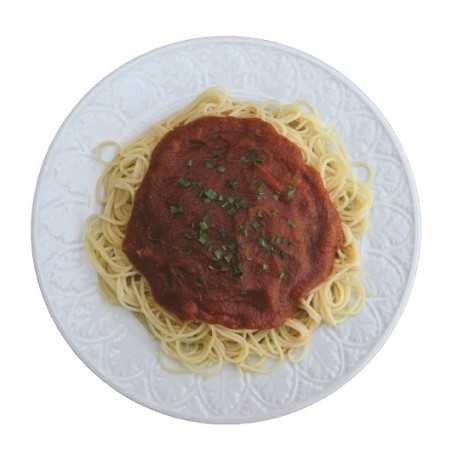 Believe it or not, there is a wrong time to eat apples. Well, at least according to Moore.
“You don’t want to eat apples right before a race, well at least I avoid them.” Moore said, “They cause you to cramp up and slow down, so it’s not the best for a sport like cross country.”

Although she does keep a stricter diet than most, but she has to indulge every now and then.
“Smiley fruit snacks would definitely be my cheat food.” Moore said, “I eat way too many of those. Before meets,
after meets, any time really.”
Besides the fruit snacks, which Moore sadly admitted were not a real food, she doesn’t really have a favorite food.
“I don’t really have a favorite food, but pasta is close.” Moore said, “It’s a good source of carbs and it also tastes amazing.”

Carter Rohweder
Wrestling
Wrestlers have one of the toughest and ever-changing diets than any other type of athlete. They often have to cut or gain weight in a short time span that can be difficult on their bodies. Carter Rohweder ’17 focuses in on training for winter.
“I am currently out of season, so right now is all about making gains and building upon my previous accomplishments.” Rohweder said.
Rohweder’s diet is all about limiting carbs and stressing lean proteins, such as fish, chicken, and steak, to gain muscle mass.
“This lean protein reduces fat, builds muscle, and creates definition.”
To go along with this lean protein, that Rohweder says is vital to any muscle building diet, is a variety of vegetables and fruits.
“I eat the darkest and most vibrantly colored fruits and vegetables I can.” Rohweder said, “These are good because they are loaded with vitamins and antioxidants for building strong, fast-twitch muscle.”
Although Rohweder has to watch what type of food he eats, he doesn’t have to worry about the amount as much.
“Since I am burning so many calories training, and then during the season, I don’t have to worry about how much I eat.” Rohweder said.

Pat McCaffery
Basketball
For Patrick McCaffery ’19 being on varsity might seem like a daunting task. He hopes that his diet will go towards maximizing his performance.
“Right now I am trying to gain weight for the season. My goal is to get to 160 pounds by the beginning of the season.” McCaffery said.
This is an important factor for McCaffery, because at 6’6” he will need to be able to go into the paint and handle bigger guys.
“It will definitely be an important part of my game [being able to operate in the paint].” McCaffery said
As far as his typical food intake goes during school, it stays pretty consistent.
“For breakfast I usually just eat a breakfast and drink some orange juice. I am not really a huge breakfast guy so something small is usually what happens.” McCaffery said. “I then usually have pizza for lunch and a bottled water.”
McCaffery doesn’t have to focus on what type of foods he is eating as much as he does the amount of food he is taking in.
“I usually have a snack after school around 4:30 to make sure I am getting enough food.” McCaffery said.
McCaffery also says his diet won’t change much when basketball begins.
“My diet will be similar when the season begins. The only difference will be having to work around basketball.” McCaffery said, “So I will probably eat more breakfast and make sure I stay away from soda and stick to water, juice, and milk which is kind of what I am doing right now anyways.”

Payton Pottratz
Soccer
There are athletes with rigorous and strict diets, which are unique to the athlete, but none are quite as unique as the diet of Payton Pottratz ’16. 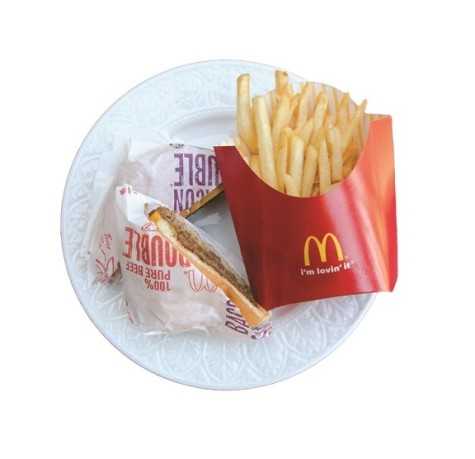 “After soccer practice I usually get McDonalds, something quick. If I don’t go there it’s usually another fast food place that has burger and fries.” Pottratz said.
This act is not only reserved for after soccer practice, Pottratz mentioned, as there is not ever bad time to go to
McDonald’s.
“There is a lady that works at the McDonald’s that knows who I am now.” Pottratz said concerningly.
Aside from eating McDonald’s regularly, Pottratz does have other eating habits that she is more proud of.

“Since I am not a huge breakfast person I almost always just have a bagel and then a water bottle.” Pottratz said, “I always try to hydrate whether it’s soccer season or not.”
There is another constant action that Pottratz finds herself doing.
“Bacon is my favorite food by far. I get four pounds every year for Christmas.” Pottratz said. “It has my name on it so everyone knows not to touch it.”

Emma Koch
tennis and basketball
Emma Koch ’19 is on Varsity for two sports as a freshman, tennis and basketball. To handle all this exercise, training, and competition she needs to fuel her body correctly.
“During the season my diet changes a lot.” Koch said, “I definitely eat more during the season, and I eat a bigger breakfast and a bigger dinner.”
For breakfast Koch usually consumes a self-made smoothie with yogurt and berries.
“It really gets me going in the morning and gives me the proper energy.” Koch said, “I also sometimes have cereal and toast for breakfast.”
However aside from the healthy breakfasts Koch eats on a regular basis, she has to cheat every once in awhile.
“My cheat food is probably chocolate chip ice cream.” Koch said, “It’s also probably my favorite food, but if I had to choose a healthy favorite food it would be pasta.”
Aside from ice cream Koch eats very healthy.
“I stay away from soda and chips due to the fats and sugars in them.” Koch said.

Nick Feeley
Cross country and track
Nick Feeley ’16 has been on the cross country team for all four of his years in high school, and he has learned to become a better runner as well as a better eater. Although Feeley is currently injured and not running at the moment, he is still maintaining his diet.
“When you are injured you want to try to eat the healthiest, most wholesome foods you can to help keep you in shape.” Feeley said.
Some of these wholesome foods that Feeley consumes include oatmeal, whole grain cereal, lean meat, as well as his favorite beverage: milk.
Feeley also mentioned that the amount of food consumed varies based on the amount of exercise his body is undergoing.
“In season you eat a lot more for sure.” Feeley said, “Typically during the season my calorie intake increases by 500-750 calories a day.”
This increase in calorie consumption is spread out over all three meals.
Feeley, while maintaining a pretty strict diet, always leaves Sunday for his cheat day.
“Sunday is the day I rest, relax, and basically eat whatever I want. This is the day I usually have my favorite meal, which includes: a pulled pork sandwich, cornbread, baked beans, and macaroni and cheese.” Feeley said.
Feeley says it is also important not to shy away from fats. Feeley knows that some diets of bodybuilders and athletes in other sports, like wrestling, shy away from fat almost always. Feeley believes fatty foods are necessary to a healthy diet.
“You want to have some sort of saturated fat.” Feeley said, “A lot of people talk about how bad saturated fat is for you but it is almost always a necessary thing for you. It not only is not bad for your body, on occasion, but is also a good mental healer and acts as a reward.”