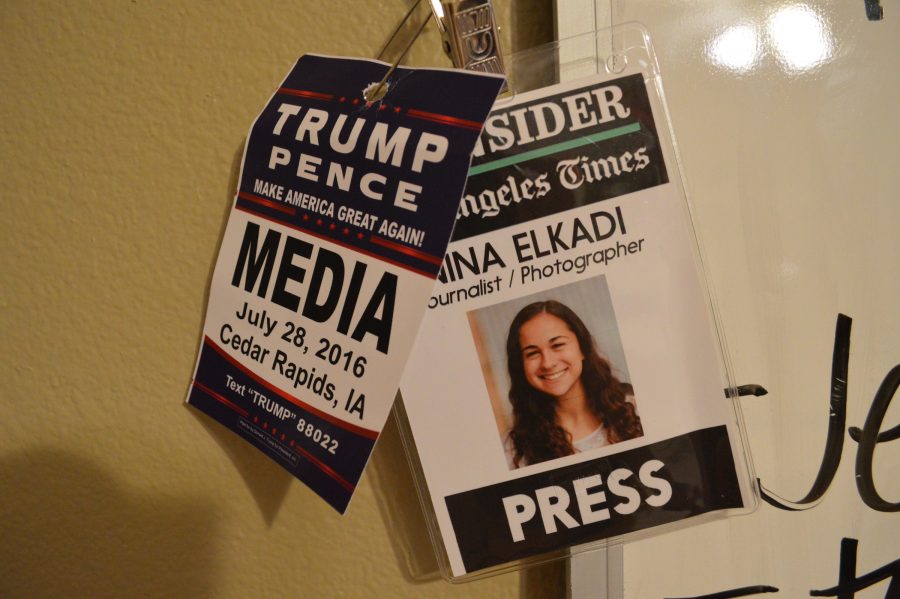 “It’s so great to see a young minority woman here!” an older white woman said to me with exuberance at my second Trump rally.

As I interviewed five-year-old girls hiding behind their parents’ legs and men with Confederate flags branded on their arms, I found myself surprised at my own position. How did I — a mixed-race, 16-year-old girl from Iowa — manage to find my way into my second Trump rally rubbing shoulders with reporters from CNN and Fox?

The first time I applied for press credentials was January 2016, and I did so through the West Side Story. Along with getting approved for credentials, I easily brought in four other members of the staff. Acquiring credentials was less complex than I ever thought it would be, a theme that consequently changed at the next rally.

I covered the first rally with the intention of interviewing my classmates, many of whom were attending merely for the thrill of a celebrity sighting — not to support the Republican candidate. For the most part, Iowa is seen as a fairly conservative state. Iowa City is an outlier in this respect, and according to the Johnson County auditor, since 1964 we have carried the Democratic presidential candidate. The type of high school students who attended this rally had signs accompanying them that read “We are just here for extra credit.”

Trump spoke in Iowa City for less than an hour, and didn’t go more than a few minutes without being interrupted by a protester calling for him to end his racist remarks. At every rape whistle that was blown, I realized I was actually waiting for something bigger to happen. Living in a city with Democrats that outnumber both Independents and Republicans combined, it’s common to see backlash toward Republican candidates. In 2011, Michele Bachmann was heckled by a “gay robot” here, causing police to intervene.

Something “classic Iowa City” did happen as an Iowa City man proceeded to throw a tomato on stage, aimed at Trump. At the end of the rally, I felt a rush. I knew I had just experienced something that would be in the next edition of history books.

The second rally I attended in Cedar Rapids, Iowa in July 2016 was scarier, but in a different way. Applying for press credentials this time took persistence and patience, and I was only able to acquire two. Everyone in the entire room was buzzing with excitement — Trump was the Republican nominee at this point and the crowd that filled the hotel was ready for battle.

A middle-aged woman walked up to the press area and struck up a conversation with me. She asked me where I was from, and I answered Iowa City. Her attitude shifted dramatically toward me.

“We are much more conservative up here. We try not to associate with your liberal town,” she told me. Cedar Rapids is a mere 30-minute drive north. Although this conversation occurred in a battleground state, it still mirrors the widening gap between Republicans and Democrats nationwide.

As I weaved through the crowds, I tried to ignore the less-than-gentle shoves that I received, and the comments about my ethnicity and gender.

“Are you Mexican? Are you voting for Hillary? What press are you with?”

For this rally, I had homemade Los Angeles Times High School Insider credentials on my lanyard.

“Oh, the LA Times? Great. You are a part of the problem — you are the liberal media.”

In stark contrast to the Iowa City rally, this press area was spacious and less chaotic. It seemed as though the reporters that had been following him on the campaign trail were growing less and less interested in the “Lock her up!” chants and more interested in finding the best Holiday Inn to crash in for the night. It wasn’t until Trump called out the “liberal media” that the journalists looked up for a chuckle. The element of excitement appeared to have faded.

When I went home that night and relayed the events of the day to my parents, my dad, a middle eastern man, said something that took me by surprise.

“If you want to be a journalist, you have to remain unbiased and objective,” he said. “The way you have been describing this event to me doesn’t sound unbiased.”

Sure, any journalist knows that in order to produce a fair and balanced article, you need to leave your bias out. However, the one thing I gained more than anything from my Trump experience is that before a journalist, I’m a person. If I experienced racism and sexism anywhere, I wouldn’t just stay quiet about it. A Donald Trump rally isn’t, and never will be an exception.