The story of a miracle

Though Maren Rosieland lived a short life of three and a half days, her legacy lives on through the hearts of those around the world. 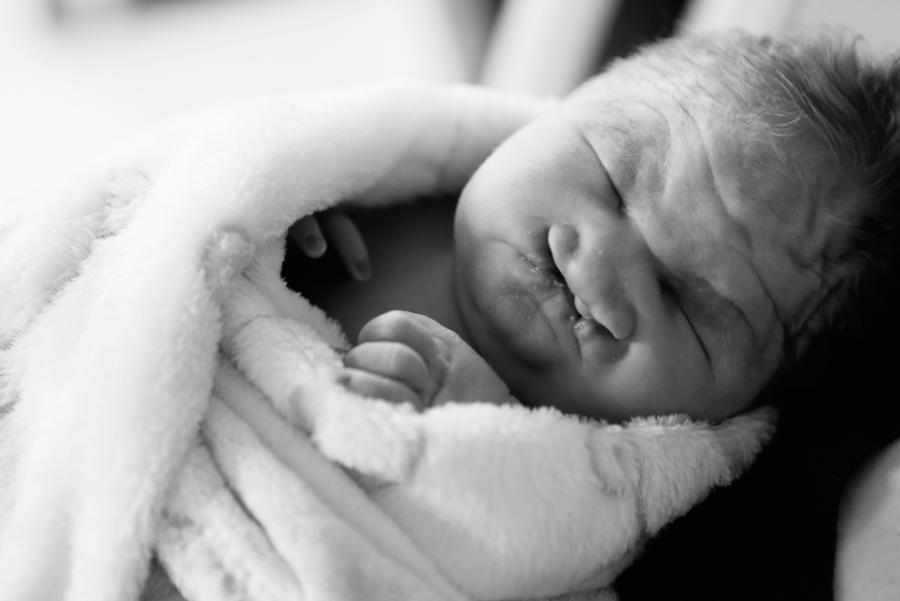 Doctors informed her that her baby had a cleft nose and cleft palate, a two cord vessel instead of a three cord vessel in the umbilical cord and a brain that was smaller than it should be. Maren Elizabeth Roiseland had Trisomy 13, a rare abnormality that is not compatible with life.

“I was driving home from school when they called. In the days that it took to get the results, we had googled the symptoms for Trisomy 13, 18 and 21, the three big chromosomal abnormalities they were testing for. Trisomy 21 is Down Syndrome, so we were actually praying for that because with 13 and 18, the chances of surviving are so rare. With Trisomy 21 we would at least have a baby to take home,” Roiseland said. “When the lady called and said it was Trisomy 13, I knew that she didn’t have a chance, so I just sat and cried.”

After learning the news of her daughter’s condition, the focus of the pregnancy shifted from dreaming about little pink clothes to praying for just two hours with her daughter.

“At the time I found out, I could start to feel the flutters of a little baby growing inside of me. Finding out that she cannot live, it’s just hard to believe,” Roiseland said. “After that initial shock, since we didn’t know if we would get to meet her outside the womb, we just enjoyed everything we could. We had a couple more ultrasounds than most women do because we thought it would be the last time we got to see her alive. And the focus really shifted to enjoying her now and praying that we would get to meet her alive. Every day there is a little more hope because you are a little further along, but at the same time, that hope can hurt too. People were warning us not to get too hopeful for being able to deliver her and see her, but that is still what we prayed for, that we would just get a couple hours with her.”

Following nine months of enjoying ultrasounds and kicks, and praying for a few hours with her daughter, Roiseland was able to spend three and a half days with Maren.

“It was a shock. I beamed that entire first day because she was alive. Neither of us really slept that night because you don’t know if you are going to lose her in the night or not, but she was stronger than anyone expected,” Roiseland said. “They started talking about letting us go home from the hospital and we were in shock. We had nothing, no clothes and no crib, because we had zero plans of taking her home. When we went home, the hospice caregivers came and showed us drugs such as morphine that we could give her for comfort as she was dying. I remember sitting there learning how to do it thinking, ‘We’re not going to need this for so long — the doctor said it could be two to three weeks.’ But then that night she started developing problems and she died soon after. That is the bad thing about hope: when you get your hopes up, then they are kind of dashed.”

Though her hopes of having two to three weeks with her daugher were not fulfilled, the happiness and memories that Maren provided will never be forgotten.

“She had the softest cheeks and really pretty curly hair,” Roiseland said. “And seeing my son hold her, and singing Twinkle Twinkle Little Star to her, it was beautiful. I wish that he could have been a big brother longer because he was so gentle with her.”

Other memories of Maren are preserved by suggestions made by the UI Hospital staff.

“Sheila Frascht, a nurse who works with families like ours who know their baby will die, was especially helpful. She came to our appointments to ask how we were doing and made a lot of suggestions,” Roiseland said. “The one I’m most thankful for was to go to Build-a-Bear and get a little recorder to record Maren’s heartbeat during an ultrasound. After Maren died, we took the little recorder back to Build-a-Bear and picked out a bunny with the softest ears, just like Maren’s soft, soft cheeks. We had the little recorder put inside, then gave it to our son James. He calls it Maren Bunny, and he knows it’s her heartbeat he hears when he presses the little paw. Sometimes it makes me cry to hear it, but for him it’s a happy thing, having a reminder of his baby sister.”

But Frascht had a larger role in supporting the family during Maren’s life than providing the idea of a stuffed animal.

“Palliative care is providing support to a child with a serious illness and their family. I met with them during many of her OB appointments to discuss their wishes for labor and delivery, to discuss making mementos of Maren’s life, to provide support on such a difficult journey and to learn what would make Maren’s life most meaningful for their family. After her birth, we spent time with Tiffany and Kevin to ensure they felt Maren was without pain or discomfort, and to make medication available in case they did sense she had pain,” Frascht said.

After Maren’s passing, Roiseland began focusing on what to do next, and how to honor her daughter.

“I miscarried our first child, and I remember laying in bed thinking, ‘There could be nothing worse than this; this is the worst pain I have ever felt.’ And so when Maren died, after carrying her full term and having her for three and a half days, I was like, ‘Nope this is worse. I was wrong. This is way worse.’ And it feels in the moment like nothing could be worse,” Roiseland said. “But then you think that actually there are things that could be a lot worse, like the mother in Syria who risks the lives of her children to get them out of a war torn country to safety, or the mother in Africa who watches her child die a little more every day because he is starving.”

“Losing a child has made me think a lot more about other mothers and other children. I am organizing a baby shower in January, but instead of the presents being for a baby here, everything will be for Lutheran World Relief, which puts together baby kits for moms who are in situations like the women in Syria or Africa, or countries affected by war, famine or drought. It’s not much, but it’s something from one mother to another.”

Even before coming up with the idea of supporting other babies through Lutheran World Relief, Roiseland was already focusing on how Maren could impact the lives of others from the moment she was born.

“There is nothing you can do when somebody dies. You can’t bring that person back, and people want to do something, whether it’s bringing food or doing something to help. We didn’t want people to be spending money on flowers because flowers die, so we asked that the money be directed to A Better Life for Kids, an organization in Chicago,” Roiseland said.

This organization provides help in West Africa, specifically in the country of Ghana. Roiseland, at one point, volunteered at the orphanage funded by this organization.

“Over $2,000 was sent in,” Roiseland said. “It softens the hurt to know that, while Maren couldn’t live, other kids now have medicine and food and education because of her life. That is 2,000 dollars that they wouldn’t have otherwise. Kids got things that they needed because of the generosity of others, and that generosity came because they knew her.”

Despite her short time on earth, Maren’s important life impacted the lives of thousands of others in the world.

“Her life was important, and she was a person,” Roiseland said. “There are people who would say, eh, she’s disposable, she’s defective. It’s important just to know that every life is valuable even if there is something not quite right according to society. We could have ended the pregnancy — it was an option the doctors gave us — but we wanted to take the chance to meet her and we are so happy we did because she was beautiful. Her grandparents all got to meet her, and her uncles and aunts and cousins — everybody got a chance to meet her and love her. All she knew was love, just pure love for three and a half days.”

“I was blessed to meet Maren during her stay in the hospital after her birth. She was a calm, peaceful, beautiful baby girl who clearly loved to be held. I believe she lived out her life knowing nothing but pure love.”

Jenifer Secrist, a Biology teacher at West and close friend of Roiseland, holds tight to the fact that Maren’s life was important to the many people around her.

“Maren is a daughter, a sister, a niece, a grand-daughter, a child of God, so of course her life is important,” Secrist said. “Importance does not come from some amount of time. Maren was beauty, she was strength, she was hope. This little girl was a miracle. A living miracle.”

The many people Maren touched, those close to Roiseland and not, all believe that Maren was a miracle.

“The blog post I wrote the day after she was born was read by 3,915 people. I don’t know 3,915 people, which means friends were sharing it with their friends who shared it with their friends. For some people, the miracle they prayed for was that Maren would be fully healed, and I know they were disappointed, but I think most people recognized that this strong-willed, beautiful baby girl beating the odds was a miracle. Being born alive and spending three and a half days with us was a miracle. And since most people don’t get to see a miracle every day, she brought hope to a lot of people that God really does hear our prayers. Sometimes they’re not answered the way we want, but sometimes we are surprised with an answer that goes above and beyond what we were praying for,” Roiseland said. “The hope and joy she gave us had a ripple effect through our family and friends and even further out to people we didn’t even know. Maren was our miracle.”

Click here to read more about Maren and Tiffany Rosieland’s journey on the blog which was created by Tiffany during her pregnancy.