As South African runner Caster Semenya continues to break records, the sports world is struggling to define what being a woman in the Olympics really means. 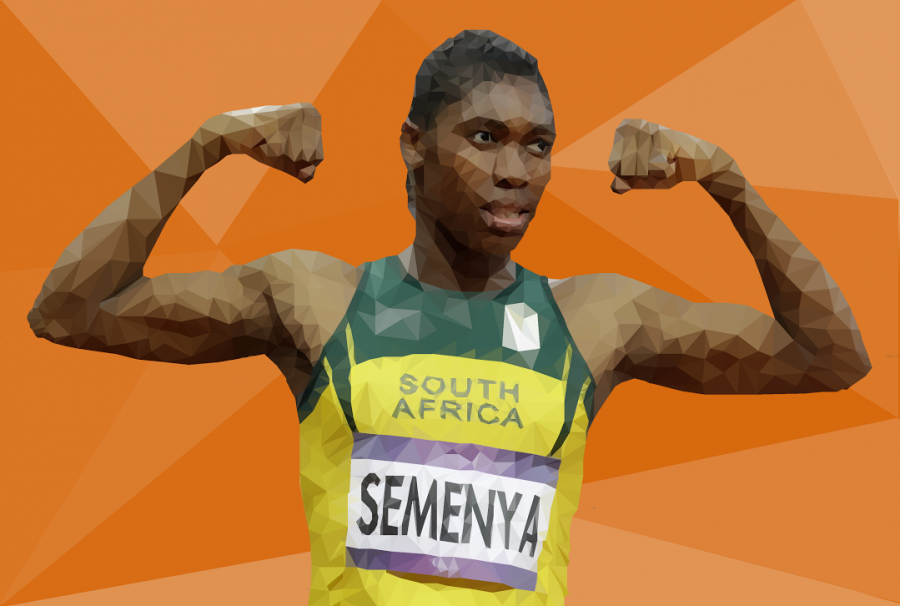 Like most Olympics, the 2016 Rio games did not escape controversy. Amongst the gold medal moments, the world saw Hope Solo call the Women’s Swedish soccer team cowards, Russian athletes get disqualified for doping and the US Olympic Committee ban Ryan Lochte for ten months. However, South African middle-distance runner Caster Semenya’s gold medal win in the women’s 800m sparked controversy years before her spikes crossed the finish line.

Originally from Ga-Masehlong, South Africa, Semenya has been a rising star in track and field since she won the 800m at the 2009 World Championship. Since then, she has burst onto the international scene and has accumulated three African championship titles and a 2012 Olympic silver medal before winning her gold in Rio. However, as Semenya kept getting faster, the debate surrounding her only got bigger.

Semenya is 5’10 and 150lbs., not unusual in women’s track and field. However, her androgynous appearance has raised questions about her gender since her 2009 World Championship win. Semenya’s muscular physique was constant fodor for the international press, and according to The New York Times, the general secretary of the International Association of Athletics Federation (IAAF), Pierre Weisse, stated that she was “a woman, but maybe not 100 percent.”  Subsequently, the IAAF required Semenya to take a controversial gender verification test. Although the test results were not intended to be released, it was revealed that Semenya had been born with “internal testes in place of a uterus and ovaries, as well as high levels of testosterone,” according to Slate magazine.

It should be noted that the handling of Semenya’s gender test was universally criticized. Many called the test a severe invasion of privacy, and Semenya in a statement said that she had been “subjected to unwarranted and invasive scrutiny of the most intimate and private details of my being.” Gender test aside, the question still remains: Is it fair for females with intersex* traits to compete in women’s competitions?
THE TRUTH ABOUT TESTOSTERONE
Semenya’s reported high levels of testosterone is known as hyperandrogenism, or having excessive amounts of androgens in the blood. Although the link between high levels of testosterone and enhanced athletic performance is still unclear, pediatric endocrinologist Dr. Vanessa Curtis at the University of Iowa believes that testosterone is one of the factors that explains the difference in performance between men and women, particularly in power and strength based sports.

“Testosterone improves lean body mass and increases hematocrit, the oxygen carrying capacity in the blood. It has not been rigorously studied in sports since it is illegal, but evidence from the East German Olympic programs gives some idea of how much it can help,” she said.

Dr. Curtis believes that limits on testosterone for professional athletes would keep the playing field level.

“The female normal range for testosterone is about 15-100 nanograms/deciliter, and the male normal range is 300-1000 ng/dl, so as you can see there is not much overlap. Testosterone levels are different between men and women, testosterone confers an advantage and is easy to check – all of these factors make it a decent thing to monitor.”

Bailey Nock ’18, a varsity track athlete at West who competes in the 800m, agrees with Curtis.

“There should be a maximum testosterone limit … [Semenya] needs to find a way to lower her testosterone so that it is not three times higher [than normal]. In order for it to be a competition, she should lower it,” Nock said.

THE TRANSGENDER QUESTION
Although a separate debate, the case of Semenya and other intersex athletes has raised questions about the Olympic eligibility of transgender athletes. With transgender issues emerging to the national spotlight in the past decade, the International Olympic Committee updated their policy on transgender athletes in early 2016. Under the previous policy enacted in 2003, both transgender men and women were required to undergo sex reassignment surgery and hormone therapy. According to The Washington Post, the new guidelines do not require surgery, and transgender men (female-to-male) are eligible to compete “without restriction.” Although transgender women (male-to-female) are not required to undergo surgery, they are required to maintain testosterone levels of under 288 ng/dl.

Jackson Elkins ’18, the president of West High COLORS club, a group that discusses and advocates for LGBT issues, believes that the policy is a step in the right direction.

“I believe that this is fair in the aspect of competition, however, morally I believe that nobody should have to be required to take drugs that [alter their natural hormone levels],” Elkins said.

However, Nock believes that the testosterone limit should be pushed lower.

“I feel that because it’s that [Olympic] level of competition, hormones in trans women should be dropped to what is average for women who were born women. The International Olympic Committee has placed the maximum amount of testosterone at 288 ng/dl, but the average amount for women is under [150 ng/dl].”

With the IAAF’s deadline approaching in 2017, only time will tell whether testosterone will continue to play a role in what defines a female Olympian.