Whether it's competing in the Olympic Trials or being invited to one of the most competitive summer training camps in all of high school football, the Martin family does not lack in talent. Ruby Martin '18 and Oliver Martin '17 have both had immense success in their respective sports. We talked to the Martin family about not only their individual successes but also family life. 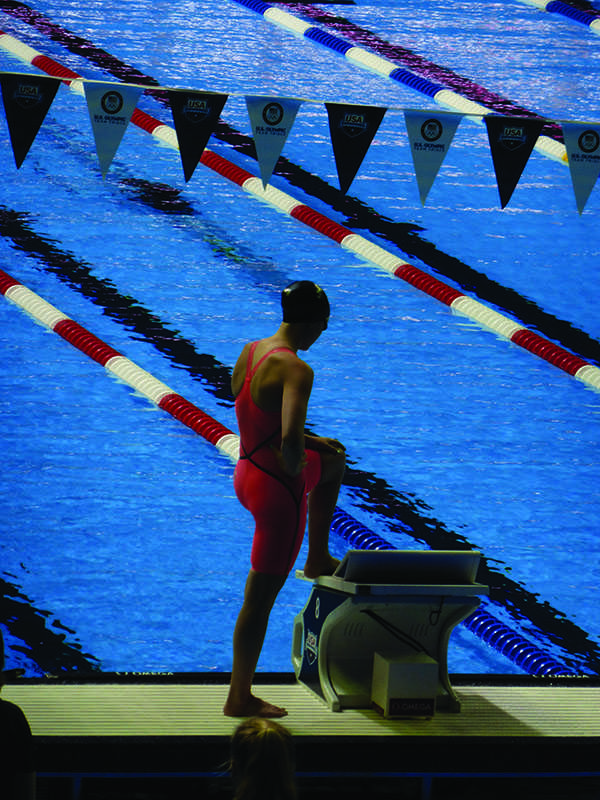 Swimmer Ruby Martin opens up about what it’s like to be an Olympic Trials Qualifier and details the everyday life. Video by Asha Irani.

Most athletes’ dream is to make it to the Olympics. Ruby Martin ’18, as only a high school junior, has already come very close to making her dreams reality.

This past summer, Ruby swam in front of thousands at the swimming Olympic Trials, reaching the finals in the 200 meter butterfly and receiving fourth place as a youngster in the pool, only two spots from making the US Olympic team.

“When I actually got there and experienced everything that was behind the pool and everything that’s out where the actual main competition pool is, it was kind of jaw dropping,” Ruby said. “It made me a little bit more nervous, but it was cool knowing that they just built this pool two weeks ago.”

In addition to the Olympic Trials, Ruby has attended many other major swimming competitions.

“Before Olympic Trials I went to Phillips 66 Nationals. I go to a lot of junior nationals, which is [for] eighteen [years] and under and I go to a lot of Arena Pro Series,” she said. “I like to attend them before Olympic Trials. I like to go and race against other Olympians and other fast people that had trial cuts like me and kind of get used to not being as scared or as nervous for when I actually got there.”

However, Ruby’s success does not come without hard work, as her rigorous schedule of eleven swim practices per week and lifting two times per week keeps her busy.

“The three days that I don’t have a two-a-day are Friday, Saturday, [and] Sunday. Monday, Tuesday, Wednesday, [and] Thursday I have morning practice and afternoon, and on Tuesdays and Thursdays I lift before I swim,” she said. 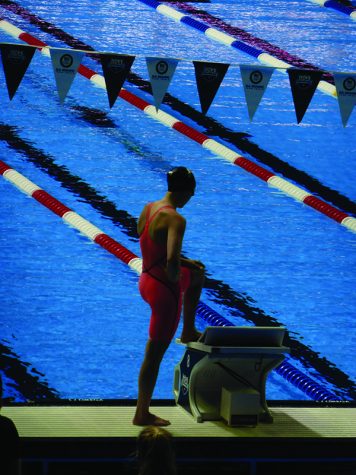 Ruby considered joining the girls’ swim team this year but later decided against it.

“I was actually thinking about doing it this year. My freshman and sophomore year I didn’t do it specifically because of the Olympic Trials and training for that, but I was going to look into it my junior and senior year. This year I found out from my coach that I might make a World Cup team,” she said. If Ruby were to make the World Cup team, she would be presented with scheduling conflicts that would interrupt her school season at the most important time: state.

Ruby has a big future in swimming ahead of her and has already been contacted by colleges.

“I just got done talking about this with my coach. He’s kind of helping me out with that so I’m starting to think about college and where I’d want to go,” Ruby said.

Oliver Martin ’17 went from being the only freshman on the varsity team to receiving scholarship offers from multiple top schools and becoming a leader on the football team.

As for his athletic improvement, Oliver has an intense training schedule to thank for that.

“[His hard work,] it’s unprecedented. He works hard in season in [the] sport but then he’s always working on his own outside of practice times in the season,” football coach Garrett Hartwig said.

“Right now I’m in season for football, so Monday [and] Wednesday mornings [we’ll] get up and lift at 7 a.m. Every day during the week [we’ve] got practice after school for about two hours and 15 minutes and Fridays [we’ve] got games. Saturdays we have lifting at 8 in the morning and conditioning,” Oliver said.

In addition to doing the workouts and training his school coaches give him, Oliver practices more when he sees fit.

Oliver has also attended many football camps over the summer, culminating in a declaration as an MVP at the Nike Opening Finals.

“I went to either college one-day camps or I went to some Nike camps. I went to the Nike Opening Finals which was in Beaverton, OR. I didn’t know that they had an MVP for the camp beforehand, so I just went into the camp looking to do as well as I could,” he said. “When I was awarded that after camp I was glad; it was a good feeling.”

As for his own future, Oliver has a lot to consider. Not only is he a star football athlete, but Oliver holds one individual swimming school record and is a part of three swimming school and state record-holding relays. On top of this, Oliver is also a varsity baseball player for West.

“Right now I’m not 100 percent [sure on] which sport I’ll do [in college]. I guess I’d be leaning towards football right now because I’m getting the most interest in it, so I have the most options in it right now,” he said. “I have a handful [of colleges] I’ve kind of narrowed down to but I shouldn’t say.”

Oliver has even began setting goals for his years after college.

“If I play that sport in college, I would want to have a chance to pursue it at the professional level. That’d be a dream and goal.”

With both Martins having abundant success, one might wonder how chaotic life must be like. Luckily, Ruby and Oliver have parents who are very willing to help their children succeed athletically.

“Every day after school each of us will be going off doing our own sport, so our parents will be driving around taking us to sports [and] getting us home, so it’s pretty busy,” Oliver said.

Spending family time together is also a challenge for the Martins.

“Normally how a day would go is either I go to morning practice really early or he [Oliver] gets up and lifts and leaves. We go to school, [at] which I don’t really see him during the day. I see my younger siblings more than him,” Ruby said.

“During the week we don’t see each other a whole lot at home. I mean, we’ll see each other right before we go to school in the morning or really late at night but most of our time spent together is on the weekends or Friday nights,” Oliver added.

Not only are weekdays hectic for the Martins, but they also travel around the world for competitions.

“Ruby travels all over, all over the country and even the world. Now she might be going to Hong Kong next month for the world cup team so she’s getting to go to a lot of fun places [like] Ireland and Hawaii. Lots of traveling, it’s tricky but we go to everything we can possibly get to,” mother Lisa Martin said.

Ruby and Oliver aren’t the only Martin’s actively engaged in sports. Younger sister Scarlet is following in Ruby’s footsteps to become a star swimmer.

“She is very talented. She’s actually breaking some of Ruby’s records from when she was younger. She’s very independent. She’ll go train on her own. She doesn’t ask us for a whole lot of coaching tips or anything. She just enjoys the sport on her own; she is kind of creating her own path in the sport,” Oliver said.

To be as successful as they are, the Martins work extremely hard to juggle both school and competitive sports.

“Their work ethic is beyond my expectations. You hope your kids are successful in life and they all are handling all of that so well with school and just working as hard as they can to be the best they can be,” Lisa said. “That helps them in all aspects of life and just I’m very proud of them.”

Despite the busy schedule the Martins have, they are always there to support each other and cheer on their family.

“I guess my mom has helped me through most of my swimming. My dad has always been there for me, [but] he normally can’t to go half of my away meets so he normally ends up texting me and kind of motivating me,” Ruby said. “They all watch me on live streams and they’re always there supporting me.”