Jeffrey Toobin: inside the secret world of the supreme court 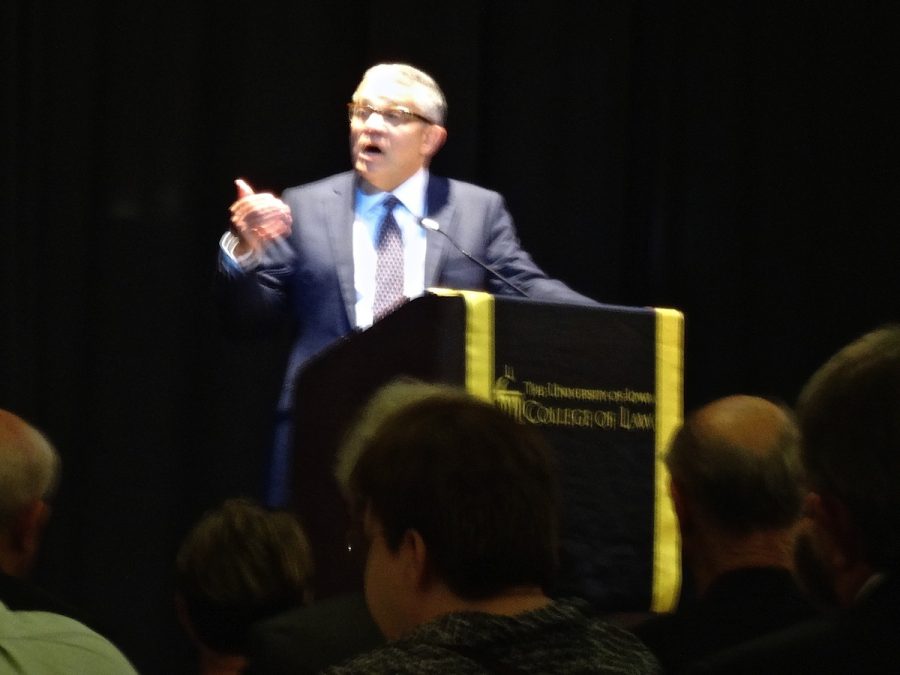 The gas lantern chandeliers were dimly lit in the Main Lounge of the IMU on September 15. University of Iowa alumni sat in the the first 10 rows, dressed to the nines. The remaining seats were up for grabs: first come, first serve. A woman wearing a shirt with splashes of red and dollops of velvet flowers, a loud outfit identifying a younger generation, swam amidst the quieter ensembles. There was a lot of catching up to do before Jeffrey Toobin – lawyer, author, and analyst for CNN and The New Yorker – took center stage for his lecture, “Inside the Secret World of the Supreme Court.”

“We’ve all been here to study Iowa’s voting patterns,” Toobin began, “and if you’re like most people, you have one question for me about the Supreme Court. That is: ‘Jeff, who’s your favorite Supreme Court justice?’ And that’s hard, but my answer would have to be Justice Souter, because he was just weird.” Souter was living a 19th century life in the 20th century, Toobin said. He moved his chair in his office to catch the sunlight, would eat the same thing for lunch every day; he ate an entire apple, including the core, “which is disgusting, but interesting.”

Toobin, having delivered the preliminary anecdotes, descended into the heart of matters. “Determining the future of the Supreme Court comes down to one thing,” he said, “and that is who wins the presidential election.”

“At the Supreme Court, history unfolds itself slowly,” Toobin said. The presidential candidate appoints justices that may serve for some thirty years, as seen with Reagan’s nominations to the Rehnquist court. With Antonin Scalia’s death this past February, the court is now evenly split, causing unease.

Mitch McConnell, the Senate Majority Leader, said the Senate would not vote on any of Barack Obama’s nominations for the vacant chair.

“He realized the dilemma of a fifth democratic seat and believed that the American people should have a say in the appointment of the next Supreme Court Justice,” Tobin said.

Toobin called this a “premeditated obstruction” by a Senate leader, saying it was a direct aim at Obama, who had yet another year in the White House. And although it was “without precedent,” McConnell indeed refused the appointment of Merrick Garland. Holdover vacancies from the prior presidency haven’t occurred since the 1800s, making this year’s election especially important; after all, the next appointee will determine the swing of the court.

“The current Supreme Court, it can be agreed upon, [is] a very old court,” Toobin said. “It is a place where social pleasantries have different meanings. ‘How are you?’ means ‘No, how are you? Can I see your blood work?’”

With Ginsberg, Kennedy and Breyer in their late seventies and early eighties, there is a high likelihood they’ll be replaced as well within the next eight years. This will allow for the president’s ideological standing and political philosophy to infiltrate the court by creating a majority opinion.

Toobin said there is a myth circling around that justices surprise the president who appoints them.

Toobin predicts that if Garland gets appointed to the Supreme Court, a few of the “older fossils” may retire. For example, Ginsberg might feel reinsured that there is a Democratic appointee, and retire. However, there is some debate that in the case of an additional Democratic appointee, she’ll be the “senior member of a majority” and will “love the veneration in the liberal community” as well as the “press clippings.”

“There hasn’t been a liberal majority since Nixon’s presidency, who had four vacancies to fill,” Toobin said. “He had to leave early, remember,” Toobin delivered sotto voce, “but appointed Harry Blackmun, Lewis Powell, William Rehnquist, and Warren Burger before taking off.”

This evolution of the Republican party, “if you put aside the crime,” was reflected in the 1970’s, because, although it was a conservative court, it delivered some liberal decisions regarding the banning of the death penalty, legalization of abortion (the legalization of abortion was a 7-2 opinion, the only dissenters being Byron White and William Rehnquist; three of Nixon’s four nominations were in majority of Roe v. Wade), and desegregation of schools.

Although liberals managed to garner support in issues such as affirmative action, abortion and gay marriage, the court has been decidedly conservative since then. Now, there is a split court of four liberals (Sonia Sotomayor, Elena Kagan, Stephen Breyer, and Ruth Bader Ginsberg) to four republicans (Chief Justice John Roberts, Clarence Thomas, Samuel Alito and Kennedy).

After Scalia passed away, a Supreme Court practice came into play in the rulings of the eight remaining Justices.

“When the Court splits, the lower-court decision is affirmed,” Toobin said. “Justices don’t write an opinion and the ruling doesn’t represent national precedent. In the event that the court splits, the Democratic appointees could prevent the conservatives from establishing new Court precedent.”

This allows for smoother sailing in the liberal direction. For example, if Kennedy cast his vote among the conservative Justices, this would result in a tie. However, if he voted in favor of the liberals, a new precedent could be established.

The next presidential elections will have much at stake, as the nominee will shape a potential decades-old court that matches their political philosophy and affect one third of high schoolers in 2016’s adult lives. “All I can say,” Toobin concluded, “is vote accordingly.”