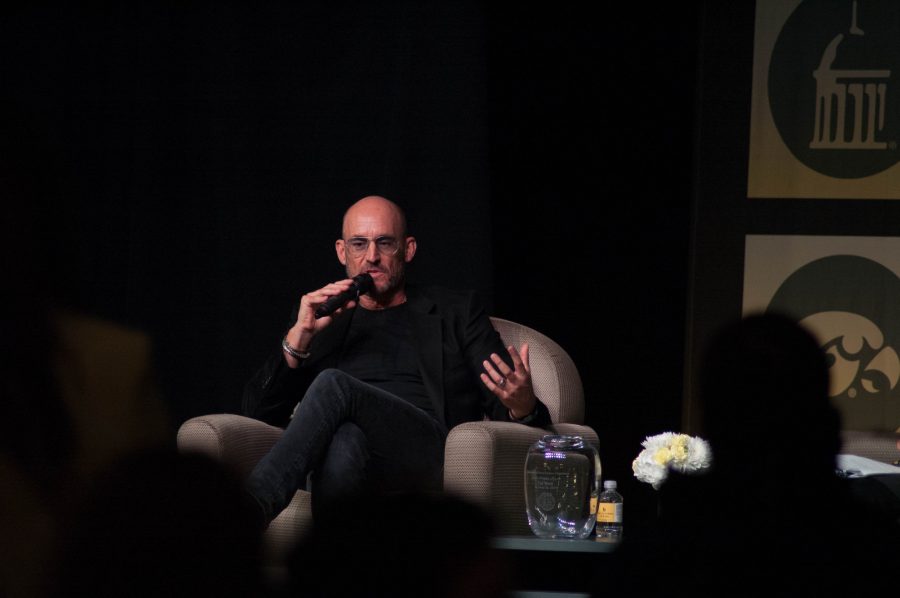 On Oct. 20, the stage in the IMU’s ballroom was set up in a talkshow-esque manner: two gray couches and a small table with a bouquet of white flowers, distorted by boysenberry lighting. College students with entrepreneurial majors ambled in, and a girl with a bob cut and a currant berry headband tested out her pen, in anticipation of Ted Waitt- the co-founder of Gateway 2000, Inc. and founder of the Waitt foundation- give ”Life with Phil: breakthrough philanthropy.”

Waitt, having grown up in Sioux City, is the son of a fifth-generation cattle rancher, who proved that even those from small towns have the chance to become affluent. “I worked hard, learned the Midwest [work] ethic. I came from an entrepreneurial family, and was raised on the idea that you always had to do your own thing, be a man of your word.”

Waitt graduated high school in 1981 and went to school at the University of Colorado. “After one semester, I packed up my bags, filled my 1970 Chevy Blazer and announced to my mom that I had good news and bad news,” Waitt said. “‘The good news is that you don’t have to pay for me to go to college anymore. The bad news is I ain’t going back.’” After much ado from his mother, Waitt attended the University of Iowa.

“I remember learning so much; those late night conversations, talking, and trying to figure things out [provided for] a great environment. College is there for a reason: young people [navigate] the freedoms of the collegiate environment by working together.” Waitt encourages anyone seeking to start a business to do it at a young age because “the best ideas are from when you have no idea; you’ve never failed before. You haven’t paid mortgage; you have no other risks.”

The best ideas are from when you have no idea; you’ve never failed before. You haven’t paid mortgage; you have no other risks.”

Waitt worked in a computer store for a nine months, and being the entrepreneurial person that his fiercely independent, but not well-to-do, family molded him to be, “made a really bad employee.” Eventually, Waitt knew he needed to start my own business, so after nine months working there, figured he “couldn’t do any worse for the guy [he] was working for.”

“My grandma was actually the original investor in Gateway,” Waitt said of his inchoate plans for his company, Gateway. “I went around to banks trying to get a loan and they said, ‘Do you have any money?’ and I [said], ‘No, I wouldn’t be going to borrow money if I had money.’” The banks delivered their verdict: a resounding no. The banks required security, in the event that Waitt did not repay the loan of $10,000, so Waitt’s grandmother “was kind enough” to put up a collateral certificate of deposit of $15,000. “The banks said they’d pay $10,000 for $15,000 cash in their bank. And so [my grandmother] had more confidence in me than the bank, that’s for sure.”

Waitt ran Gateway, a computer hardware company, for approximately twenty years, saying that its intention was about the effects [the company] had on the community. “We were a bunch of young people having a great time in an exciting industry,” Waitt said, and things were changing swiftly. Waitt then noted the importance of social conscience and passion on a long-term company. “[At Gateway] the employees were proud of who they worked for. If [employees] think you’re just out to make a buck, they won’t stick around; their hearts won’t be into it.”

Many people are familiar with Gateway because of the unique brand: the cow-patterned cube. “Most people don’t expect computers from Iowa,” Waitt said, and they “usually confuse [Iowa] with Idaho and Ohio.” To him, the cow-spotted cube represented the hard-working people dedicated to complete satisfaction. “No matter where we were around the world, [Gateway] always took the cow spot.” Those Iowa values thus served as a mnemonic that they were a “value-driven business.”

Waitt said he is often referred to as a maverick, to which he attributed his ponytail, back when he had hair. After being asked whether that qualified him as a maverick, he said, “Yeah, you know, we liked to break rules; we never followed convention. And in successful business they’d say, ‘Well, nobody’s ever done it that way before,’ and we just liked to prove people wrong.” Along this vein, Waitt nourished the Waitt Foundation and Gateway to be “very social institutions.” The companies were always “one of the first involved in things that weren’t necessarily for business, something called ‘cause related marketing,’” meaning they were always giving back to the community.

Waitt first started thinking philanthropically at a young age. “I felt a big obligation to give back. I remember sitting with a couple of my friends and one friend was sitting there saying, ‘Money is evil. You have to go and save the world together’ and another friend said, ‘Money is everything; you have to have money.’” Waitt remembered thinking that he could do both; he was hoping to be in a position to give back.

The Waitt Foundation began small, but grew exponentially. Along with the burgeoning company came a diverging from Waitt’s original aspiration for the foundation was supposed to be and what it evolved to be. Waitt, who was a staunch advocate of small group settings, felt it was important to keep the company tight-knit, and although acknowledging the company’s salient work in violence prevention, was “still looking for [his] passion.”

Waitt, having a keen sense of observation, was able to discern where his benevolence was needed most. In the early 2000’s, Waitt travelled on an ocean exploration, finding shipwrecks and solving great mysteries, when he began thinking, “This doesn’t look right to me. Where are all the fish in these places?” He then recalled a conversation with “two of the leading scientists in the world”, in which they told him the coral reefs were being decimated. “I talked to more scientists and saw that oceans were really one of the biggest problems of our time,” Waitt said of the detriments overfishing has on the ocean, which pulls out species far faster than they can reproduce. “I also looked closer and found that it was a problem that was fixable, and [moreover] a problem that really resonated with me. I asked myself, ‘Can I make a difference?’ and [ultimately] felt it was something [I] could make a big impact on.”

I also looked closer and found that it was a problem that was fixable, and [moreover] a problem that really resonated with me. I asked myself, ‘Can I make a difference?’ and [ultimately] felt it was something [I] could make a big impact on.”

“We learned that it’s not always about money, but about using your time and your intelligence to become smarter,” Waitt said, for when he first entered the philanthropic field of ocean advocacy, everything was in disarray. “There’s a lot of countries that have made commitments to protect their economic zones, but don’t know how to do it.” Moreover, most governmental organizations were nonprofit and didn’t collaborate; they competed for donors and resources, wanting to say they were the ones to single-handedly save the oceans.

At the time, he was on the board of National Geographic, and realized no problems could be solved “without governments at the tables.” Waitt and John Kerry, Secretary of State, were able to connect the governments in need of tools and assistance with the philanthropists, nonprofits, N.G.O.s, and scientists. The Waitt Foundation is currently involved in approximately 15 million square kilometers of protected areas around the world, and has incrementally moved the barometer from less than 1% protected oceans and national places to 4%. “We didn’t do that alone,” Waitt emphasized. “We did it by collaborating.”

“We had a couple failures and false starts that weren’t inexpensive, but we learned and broadened our net,” Waitt said. “In one of my first philanthropic lessons, I donated an astronomical amount of computers to bridge the digital divide. I think [we had] 30,000 computers built, and put in all this effort to equip these centers and it ended up being a failure. Why was it a failure? We brought the tools, put them where [the countries] needed them. So I told myself, ‘I want to know why this didn’t work.’” Waitt conducted research and found that the singular difference between where it did and didn’t work was the people. “The sites where there was someone who cared about those kids, had the time, and made it a great place were tremendously successful. However, this was only in a small percentage of the sites.”

In philanthropy, Waitt said, there’s a lot of people who want to make a difference by themselves. “You have to work with other people, you have to bring people together,” Waitt said. “And bring together diverse people, because it takes a tremendous amount of scientific and academic skills to do it properly.”

For the students entertaining the possibility of investing their time and resources, Waitt admits the gamble of risk-taking. “I tell people they’re not always going to be successful, but once you find something that works, focus on it, go for it and just do it in more places to make differences.” Above all else, Waitt encourages people to find what they’re really passionate about. “For some people it’s the environment, for some it’s wildlife, education, or humanitarian efforts around the world. It can be a variety of things, but what resonates with you will make the biggest difference.”

That’s what [philanthropy] starts with: if you want to.”

“That’s what [philanthropy] starts with: if you want to,” Waitt said. “After finishing a project, you should say, ‘Wow that felt good’ and realize the importance of paying it forward.” 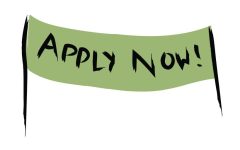 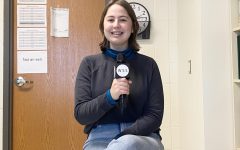 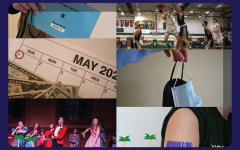 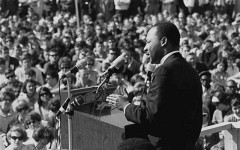 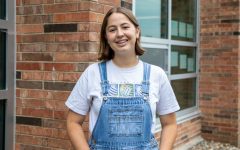