Approximately 200 West students gathered outside of the school on Nov. 11 to share their stories of the hate encouraged by President Elect Donald Trump. 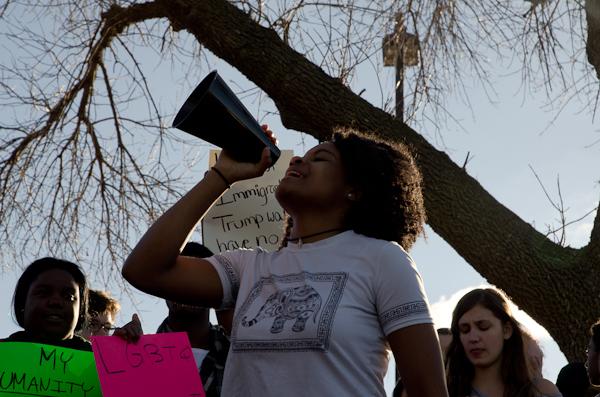 Jade Merriwether '17 leads a chant for the protestors.

It has been two days since Donald Trump was appointed President Elect of our country and there has already been significant hostility towards those he has targeted. Conversely however, there have also been many protests against Trump’s ideals and the bullying perpetrated by him.

On Nov. 11 at West High School, around 2:30 pm, students who opposed Trump were encouraged to gather in the courtyard (later changed to the front of the school). The initial crowd of about thirty gathered around the flagpole. As the crowd gathered, the group moved the moor, in front of West, and formed a loose circle, which, as more folks arrived, quickly evaporated a sort of mob shape, with a small space in the middle for people to speak. People, black, white, latino, muslim, christian, et. all arrived to protest against xenophobia, racism, sexism and many discriminative things ending in ‘ism.’  The protest was not anti-Trump, per say, but was against the bigotry and racism that he exemplifies.

People went to the middle of the circle to speak on issues, many of which touched upon the aforementioned topics. People shared stories of bullying, that had either happened to themselves, or people they knew.

As previously stated, Trump has only been appointed President Elect for a few days, and already Muslims, African Americans and Latino people have been bullied by Trump people on the grounds that it’s his country. The protest was a much needed show of support for everyone who has been affected by Trump’s followers.

The protest was instrumental in bringing everyone who was against Trump’s policies together, showing people that they were not alone. There were many, many others who feel the same way.

This gathering showed that the hateful things that Trump has said in the past will not be forgotten. He may have gotten everything he wants in his life, including the presidency, but the one thing he won’t get, that he doesn’t have control over is the minds of people who remember, and who have been affected by the oppression he has caused.

It was stressed that this protest and future ones must be peaceful. Nothing will be gained by inciting violence except anarchy and a tainted reputation. Future protests, and that this is definitely not the end of fight for justice and the rights of marginalized people, were promised.