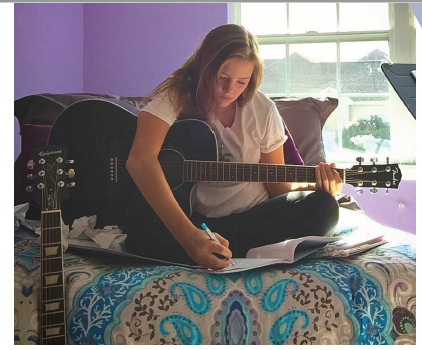 The next generation of stars right now are the ones who aren’t discovered, have no money and aren’t even 20 yet. They’re enthusiastic teenagers who hold on to their big dreams and will stop at nothing to pursue them.

Meet Abbie Callahan ‘20, who is one of these teenagers.  Passionate about music and singing, she hadn’t discovered her love for the arts until the age of nine, when she was inspired from watching the talented kids sing on the hit show America’s Got Talent. She pursued her passion right then with nothing but her karaoke tracks, her voice and the occasional jam session with her uncle. Today is a different story.

She first enters her room after a long and demanding day of school, full of lectures, homework and drama. Instantly, a light and fresh breeze hits her face from the open windows as the lilac walls brighten up the room. Avoiding the winding cords, amps and little guitar picks scattered all over the floor, she walks over to her bed and shuffles around the whirl of sheet music that covers it. “It’s kind of chaotic,” Callahan said. “My room’s a mess,” she added with a laugh.

Instead of starting on homework or worrying about the day’s problems, she grabs her birchwood guitar, her collection of more than 500 songs, and strums along to a beat to unwind and forget about her day. Her natural ability to turn any regular piece of sheet music into something deep and meaningful flows out of her. After a few short minutes of recording a song, she listens to it with a half-smile on her face, scrutinizing for any improvements before she posts the video to her Instagram account with over 2000 followers.

However, that’s only one small part of Callahan’s life. On days when she doesn’t have the time to play her worries away, she’s busy participating in Showtime, West High’s prep show choir, preparing for the exciting All-State performance, taking lessons at Rosazza Studio or singing for  Treble Choir.

On top of that all, she loves to spend her evenings performing her own original songs to the public. However, before the booming claps and whoops can thunder the stage, Callahan spends days  drawing inspiration, considering ideas, erasing and testing notes until the song is finally complete.

“When I write my songs, ideas come to my mind spontaneously. Usually it’s when I’m up at three a.m and I can’t go back to sleep,” Callahan said. “I just start writing things because when it’s three a.m, your brain isn’t like ‘oh that’s not good.’ It’s in a dream state, so I’m like, “Yeah that sounds great, throw that in there.’”

Regardless of times when learning music is frustrating, all of her hard work certainly pays off when presented to the ears of the public. She’s performed multiple gigs since sixth grade, and her performance at The Mill Restaurant Open Mic Nights is her favorite. She’s also performed at the Yacht Club Open Mic Nights, which is situated in the downtown and known to be a neighborhood nightspot.

“It’s a bit sketchy,” Callahan says with a laugh. “but [the audience] all love and support me everywhere I play. They come for the same reason I play. The love of music.”

Her older sister Carrie Callahan ‘18 remembers one of the first moments when she first heard Abbie sing. “I told [Abbie] that she should go on Dancing with the Stars and I should go on the Voice because I thought I was a better singer than her,” Carrie said. “…she decided to sing in the talent show at Weber and she sang “Rolling in the Deep.” It was actually good.”

It doesn’t help that the nerves and butterflies are dancing around before she goes up on stage, but once she steps into the spotlight and sings the first note, her jitters melt away.

“In real life, I’m pretty shy, so when I’m on stage and singing, I feel awesome and really find that everyone is there for me, so I can just own it all and I really love it,” Callahan said.

One of her most memorable moments was when she was performing in a competition at the Iowa State Fair. After she dedicated the song “Imagine” to the victims of the “senseless violence around the world” such as terrorism, she sang her heart out and felt more connected to the audience than ever before. “My biggest wish is for world peace,” Callahan said. “I dedicated my song to these victims in the hope that I’m making a difference with my music.”

And she certainly is. Callahan distinctly remembers a time when after a spectacular performance, a stranger came up to her and thanked Callahan for blessing her with her music.

“That was a really big accomplishment for me. Music to me, is making people happy. I feel like that’s what entertainment is really for,” Callahan said.

Regardless of how many successes and failures received, a singer never goes through a music career without experiencing some weird occurrences. Callahan recalls one special moment when she was in the streets of Key West, Florida, and a guy asked if he could record her singing to be put in a movie.

“I sang the song “Riptide” and while I was singing, he came up and started drumming next to me.” Callahan said with a smile.

Now in the present, Callahan looks toward the future with her music career and the new opportunities that she can play in.

However, she isn’t doing this job alone. She has the unconditional support of her mother Kate Callahan, who will support Callahan with whatever she decides to do with her life. “…I would like to see Abbie accomplish her dreams and be able to make a living doing what she loves,” Kate said. “If that doesn’t happen, she will always have a talent that she loves and able to share.”

Underneath all of her musical successes and endeavors, Callahan is still like any student at West.

“The music is just one part of Abbie’s life. To me, I’m most proud of the type of person she is, the values she has, and how she treats others,” Kate said. “I’m proud of her dedication to making herself a better person.”

Although Callahan doesn’t have an exact map for her future, she never plans to give up her passion. “I’ll sing and play guitar for the rest of my life because it’s always going to be a passion of mine.” Callahan said. “I don’t think I’d ever stop.”