The Sound of Music: From screen to stage

Jack O'Brien's The Sound of Music comes to Hancher. 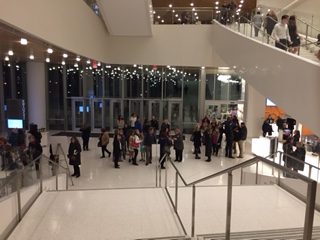 The audience files into Hancher Auditorium to see the Sound of Music.

Musicals, romance and beautiful scenery are some of my favorite things, all of which were present in The Sound of Music directed by Jack O’Brien. On a cold Thursday night, it seemed as though everyone from Iowa City was crowded in Hancher’s concert hall. The shuffling and conversation portrayed the excitement of the evening, yet when the lights dimmed and the curtains pulled back, everything went silent.

The musical opens with the abbey choir and the Mother abbess, played by Melody Betts, discussing which postulants are ready to become full-fledged nuns. One of those not ready is none other than the star of the show, Maria Rainer, played by Charlotte Maltby, relaunching the Mother Abbess and her mistresses into song. Though the song Maria was to help show conflicting opinions about Maria, frankly, it’s confusing. You’re not sure who’s supposed to be playing devil’s advocate and who isn’t, leaving you feeling a bit bemused after the song ends. When nuns argue, it’s never good.

Now, Maria finally makes a full-fledged appearance when she breaks into song with the Mother Abbess, singing My Favorite Things. The bad news comes next though: Maria is sent away from the abbey to care for the seven children of the former naval captain of a landlocked country, Captain von Trapp, played by Ben Davis. Maria arrives at the mansion and is introduced to everyone in the household very, very quickly. True to the movie, the children are called with a whistle and then quickly shout their names out. (Maria must learn seven names in less than minute, for those of you who haven’t seen The Sound of Music before.) There’s Liesl, Friedrich, Louisa, Kurt, Brigitta, Marta, and little Gretl from oldest to youngest; played by Paige Silvester, Roy Gantz, Ashley Brooke, Austin Levine, Iris Davies, Kyla Carter and Anika Lore Hatch respectively. If you weren’t paying attention, you could easily mistake Brigitta for Louisa; it’s just that easy.

The minor characters in this version play a larger role. In comparing the movie with the play, the Governess Schraeder, who was to be von. Trapps wife, has a number of her own in the play. How Can Love Survive? A song that talks about how rich she is and how that hurts her love life. Thankfully for Maria that might have helped Governess Schraeder call off her marriage with Captain von Trapp. Uncle Max, too, seems to be a much more money-driven man in this rendition, always commenting how he loves how the von. Trapp family lives in their mansion and how he wishes he could live like them. But, he is still there to help guide the von. Trapp family to their happy ending.

Now, the ending of the Jack O’Brien’s rendition gives the audience a happier ending for Rolfe and Liesl than does the movie. In his version, Rolfe still finds the von. Trapp family hidden in the garden, yet he turns away and lets the von. Trapp family escape. In the movie, Rolfe pulls a gun on Captain von. Trapp and eventually yells for the lieutenant, thus blowing the family’s cover. The von. Trapp might not have to drift their way through Austria on the stage, but the audience does not get to see the nuns’ final joke of the movie, (telling the mother abbess they have sinned while pulling out parts of the nazi’s car).

The hills were alive in Iowa City when The Sound of Music came to town. While staying mostly true to the movie, Jack O’Brien’s bright and very cheerful take deserves praise. Yet, the musical felt rushed even though it took around the same amount of time as the movie: three hours. Not all scenes could make it onto the stage, and the continuity of some scenes felt sketchy, such as Liesl meeting Rolfe right outside of the house and then having to climb through an upper window to avoid detection. Though if you are looking to enjoy a nice, music-filled evening with a sprinkle of World War Two history, I suggest you go see The Sound of Music.