From bus drivers to custodians, these are the stories behind the people who make our schools function. 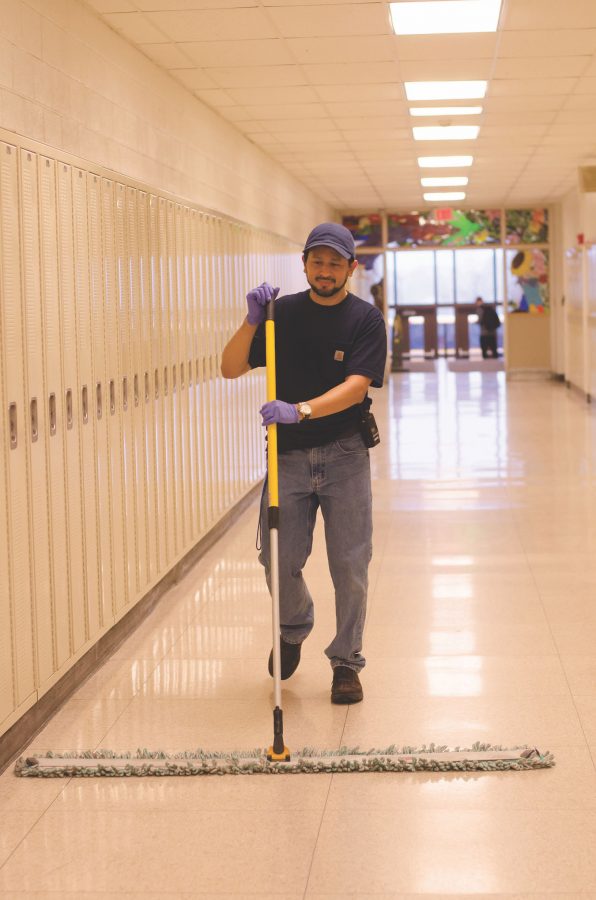 The daily effort of scratching out graffiti around the school is something custodian Daniel Carlos is all too familiar with. Although for many this may seeming like a taxing task, for Carlos it’s all about mindset.

Carlos grew up in Orange Walk, Belize, where he spent his days playing in the yard with his friends and enjoying the beach. In 1998, he acquired a scholarship to study general medicine in Cuba.

“Initially when I first graduated, I got started with a family planning clinic. Then I moved over to a government granted clinic and did primary care,” he said.

Carlos moved back home to Belize and treated every case that walked in. The government clinic allowed citizens to get access to medical care without having health insurance.

While Carlos was working in Belize, his sister met her husband working at a ranch. The 24,000 acre ranch happened to be owned by the Roy Carver, and she ended up moving to Iowa City. His family began to follow his sister to Iowa, and he followed suit. His career path would end up changing dramatically.

Practicing medicine in the United States is a “different ballgame,” Carlos said. In order to become licensed, he would have to take multiple exams, complete his residency and spend countless hours proving his education from Cuba and Belize was valid. All of this would mean it would take months, or even years before Carlos could work. Adjusting to the healthcare system in the United States would also take time.

The healthcare system in the States is completely different than Belize. Free clinics for people lacking health insurance are virtually nonexistent here.

“I think medicine should be something everyone has access to regardless,” Carlos said. “Mind you, the waiting time [in Belize] isn’t the best either.”

He got his first job after six months of searching, and did custodial work at Pearson. The job provided little to no benefits, and when he saw the job open up at West High, benefits included, he jumped on it.

Carlos has mostly positive experiences from working at West, and keeps his smile everyday by “making the job fun.” One memory from the dance team two years ago continues to stand out to him.

“[They just had] their poster pictures taken. They called me by my name, and they all autographed the poster [to give to me],” he said.

Taylor Fridrich ’18 was on the dance team and signed the poster that day, thinking he would appreciate it as a “nice little gift.”

“He’s always smiling and always saying hi to everyone, and he’s always helpful,” she said. “Whenever we’d ask him for help, he’d never not smile. [Nothing] would ever seem like a job for him.”

Little gestures by students and staff are what make him feel like “West is one big happy family.” Even the bad moments, such as the unjamming a locker, he tries to turn into learning experiences. When it comes to a clogged toilet versus the kid with the locker issue, Carlos will always choose the kid.

“Both of them are priorities, but the student is behind on time anyways. Students are on the clock, they can’t be late for class,” he said.

After newspaper work nights, Sara Whittaker, English teacher, usually brings over the leftover brownies, pasta or burritos to the custodial office. Before winter break, Carlos got her a gift card that read, “thanks for always thinking of us.”

“He is a bright spot in the day,” she said. “I am so grateful to [Carlos] and all of the custodial staff. They really go above and beyond the job description.”

Carlos hopes to continue his education and receive his masters in public health in an effort to work on disease prevention. He doesn’t necessarily dream of working for the Center for Disease Control, but rather hopes to make a difference in his community, whether that be Johnson County or Orange Walk, Belize.