An annual celebration of LGBT pride brings crowds of people to the streets of downtown Iowa City. 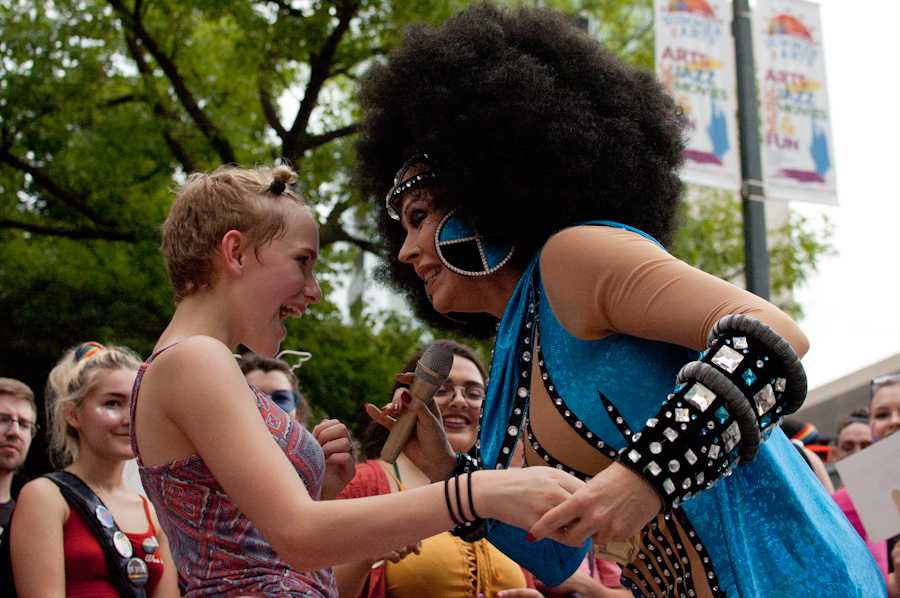 Candi Stratton, as "Cher", smiles at a young girl after giving her a kiss during her performance in the Iowa City Pedestrian Mall on June 17.

On Saturday June 17, hundreds of people gathered together to celebrate the LGBT community at the annual Iowa City Pride Festival.

Iowa City Pride originated in the 1970s following the Stonewall Riots, and has been a staple of Iowa City culture ever since. The organization aims to promote diversity and acceptance through a variety of events for the whole community. Recently, they’ve pushed for more inclusivity for queer people of color as well as for elderly people who identify as LGBT; groups that are often marginalized or forgotten in the discussion of LGBT issues.

The festival included a multitude of activities for all ages. A parade featuring over thirty different floats kicked off the celebration. Across the pedestrian mall, churches, organizations and other vendors showed their support for the LGBT community by handing out snacks, fans and other merchandise. Perhaps the area that drew the most attention was the festival stage, where a series of drag performers and dance troupes performed for a wide audience.

Among the festival visitors were many West High students. For Erin Lidral `19, this was her second Pride Festival.

“I think pride is important because many people grow up thinking they’re alone and they feel ashamed for who they are. Pride is able to show these people that they have a huge community of people just like them who are willing to support them,” said Lidral.

According to Iowa City Pride, this year’s festival was the biggest yet. The group hopes to keep expanding the festivities in order to create an inclusive, safe environment for everyone in Iowa City, regardless of sexual orientation or gender identity.