Theatre West: all about The Summer Showcase and the upcoming season

A look into the upcoming year for West High's theatre department. 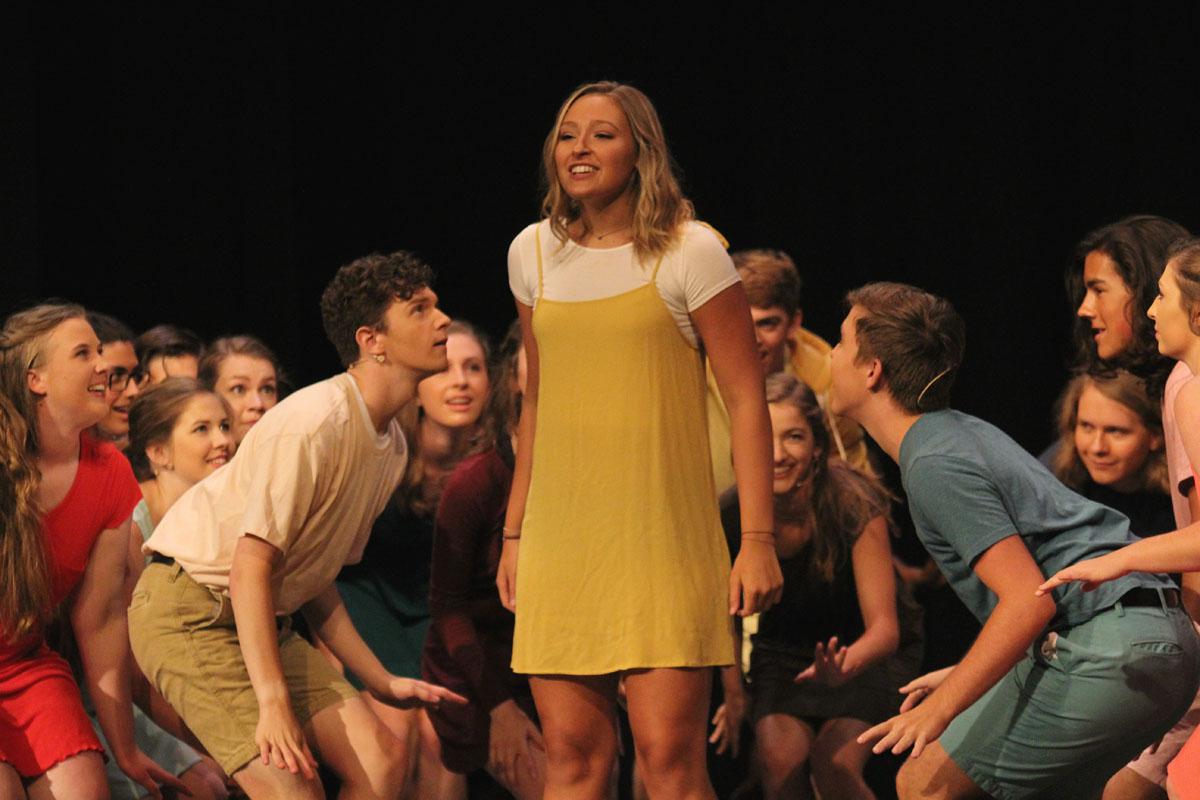 Pieper Stence '18 performs as the lead in the last act of the Summer Showcase during dress rehearsal on Thurs., July 27. When asked what her favorite part about the Summer Showcase Stence said, “[I like] being able to perform with so many great performers!”

While most students are traveling and enjoying the summer before school starts, over 30 West High cast and crew members were hard at work preparing for Theatre West’s first ever one-night Summer Showcase on July 28. The Summer Showcase featured 18 iconic, timeless Broadway shows and raised over $2,500 in donations.

In all of the 12 productions that director and English teacher Katy Nahra has worked on over her six years at West High, Summer Showcase was the first unique production of its kind.

“We’ve talked about doing this many times and we thought this would be a really good opportunity. We have so many kids involved and not enough opportunities and so we thought it would be a good chance,” Nahra said. With a recommended $10 donation at the door, “We are self-funded. We thought we could do this as kind of a fundraiser event but also give kids the opportunity to showcase their talents.”

One such student who has been given this opportunity is Eman Elsheikh ’18, a senior who is relatively new to the stage. She’s been involved with production crew for two shows before becoming a chorus member of Theatre West’s most recent musical, Les Miserables. At first, she was hesitant to audition.

“I’ve always really wanted to be an actor, but I always thought that I really didn’t have much time for it, which is why I did production crew,” she said. “I still wanted to be a part of Theatre, though.” Then, she took on her dream. “When I first auditioned for Les Miserables, I didn’t think that I would get in. I’m happy that I did because it was super fun being in the chorus,” she said.

That first leap led her to perform in Summer Showcase acting as many characters, including the lead role of Belle from Beauty and the Beast. “My favorite is Belle, but it’s also the one I’m most nervous about,” she said. “When I do feel comfortable it’s always fun doing it.”

Along with Belle as the opener, there are many other songs in the show. These range from Hamilton’s  Schuyler Sisters to Another Day of Sun, from the wildly popular and award-winning movie, La La Land.

Nahra said production staff knew they wouldn’t be able to cover every musical. “We chose wonderful songs from bigger musicals to accommodate more people,” Nahra said. “We just came up with our list and changed according to who we got.”

A large cast makes for more the merrier, but it can also cause troubles for a new summer production. Elsheikh ’18 experienced this firsthand and said, “The fact that it was summer made it hard for everyone to meet up at the same time. Everyone has different schedules, so we had to think of obscure meeting times.”

A large cast can also create new leadership opportunities that help make Summer Showcase and future productions run smoothly. “We really want this to be student-driven,” Nahra said. “We thought it would be a great opportunity for tech people in new positions to practice before we got to the main season shows. It’s also great for the cast members to teach one another music or this or that.”

Running a show smoothly is largely because of Tech Week, an intensive time where students spend hours nailing down a production. Summer Showcase was certainly not an exception, according to Elsheikh ’18.

Nahra agrees, but under all the pressure, she knew the production would come together.

“Since we’ve never done this before, we didn’t know exactly how it would work,” she said. “Instead of working around one cohesive piece, we completed sets for very different shows. It’s been a lot harder than we thought,” Nahra said.

Everyone was nervous things won’t come together but they always do, she said. “I was assured things would be fine. This is the crucial time where we have to make some big decisions, last-minute changes and put our noses to the grindstone to get things solidified,” she said.

The reward for all of the hard work isn’t just the roaring applause from the audience, but also from new experiences and lessons that people learn every day.

For Elsheikh ’18, the reward is all of the dazzling costumes that every cast member wears throughout the shows. They look their best despite all of the quick changes, tight dressing rooms and broken straps. “I like how [cast members] have costumes from every different thing, because normally you’d see one kind of costume throughout one whole show,” Elsheikh ’18 said. “Here you see everyone dress up in all different costumes. It’s really fun to see.”

For Nahra, the reward is adjusting to a new show where all singers are backed up by soundtracks instead of a pit orchestra. “We knew it would be very different to do a show to soundtracks, but this made us really really really appreciate the work that the Choir and Orchestra directors do,” she said.

In the end, however, it’s the people in Theatre West that help make a show come alive.

“We love spending time with the students,” Nahra said. “We do this because we love what we do. We love being a part of such a talented group of people that we have here. We love seeing what [the cast] does best.”

After forming special relationships with cast members over many years, show after show, both can agree that letting go of the seniors is bittersweet, especially the recently graduated seniors who are performing their last production with Theatre West before moving on to college.

“It’s always hard. Before we even knew that we were doing [Summer Showcase], we said our goodbyes at the Spring Musical and then we get this opportunity because some of them can still be involved, but it’s always bittersweet,” Nahra said. “You’re happy for them, they’re going to do wonderful things with their lives, but of course, you make those connections and it’s hard to let go.”

With two new exciting productions for the upcoming year, Twelve Angry Jurors and West Side Story, it’s hard to imagine performing them without the seniors, but Elshiekh ’18 believes that it’s time for younger students to rise to the occasion and looks forward to the new season. “It’s going to be good. I feel like we have a lot of really talented juniors in our class. [Theatre West] also has a lot of talented underclassmen that are going to grow and get better,” she said. “I feel like there’s never a short supply of talent. In every class there’s a lot of talented people that are willing to step up.”

Keep reading for more on the upcoming season at Theatre West:

Any plans or ideas for summer productions in the future?

Katy Nahra: It’s something we’re really going to have to talk about. We thought this would be minimal as far as rehearsal time, as far as planning time, building time, and getting ready, but that has not been the case. I think it’s been probably just as much work as any regular show we’ve done. While we’re happy to do that, we want to make sure that we get that rest time, rejuvenation for everybody for students and for teachers. We kind of deserve that break so that we’re ready to go for the new season

What are you most excited for in the upcoming season for 12 Angry Jurors and West Side Story?

Katy Nahra: Ann Rocarek and I have always loved that play. It’s something that she teaches in 10th grade and it’s part of our classroom and something we’ve wanted to do on stage. It has a very powerful message that transcends time. There’s always that question when it comes to politics and racism, and you know, what’s right, what’s wrong, that line of ethics that we have to negotiate. We’re excited about that. And of course, West Side Story. We know we have a lot of strong dancers this year. It’s a very dance-heavy show. It’s also a very very very difficult show for orchestra, so I had to kind of get approval from Mr. Welch. It’s a tough one, and he said we’ve got the most talented musicians here at West and if we’re ever going to do it, this would be the time. We have lots of great talent so he said okay! Let’s go with it.

If a student came up to you and said that they were considering to audition for productions or make the switch from tech to acting, what advice would you give them?

Eman Elsheikh ’18: I would tell them go for it. Honestly, you really don’t have much to lose. There’s a lot of different factors that go into it and you shouldn’t be afraid of rejection because either way you can be part of it and it’s really really fun. If you want to try, take that leap.