Sandra Cisneros, Hispanic-American writer, reads for the public on Sept. 11, at Macbride Hall at the University of Iowa. 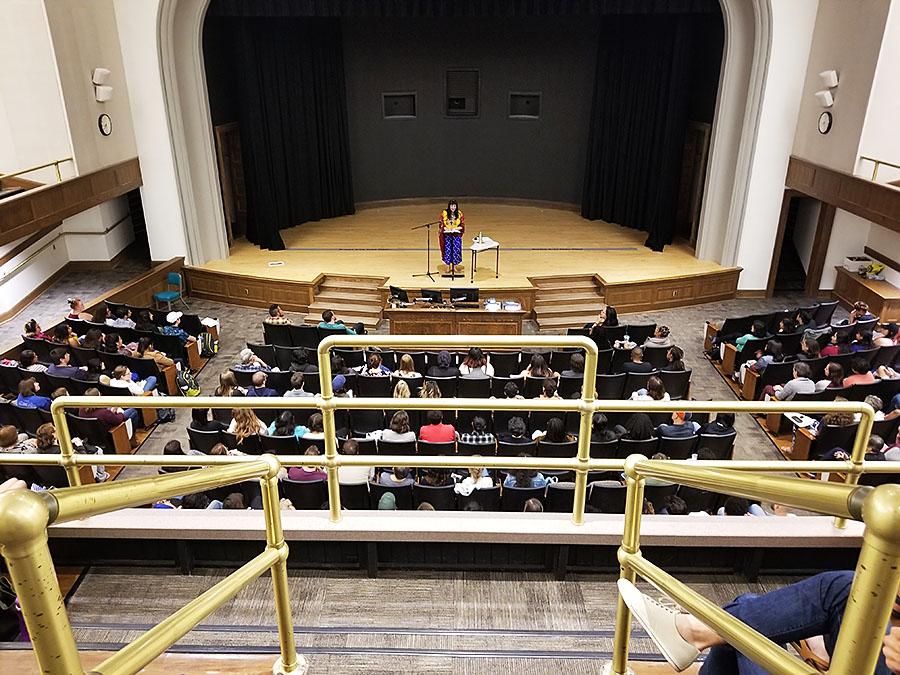 For many, including Maria Martin, West High Dean of Students, Sandra Cisneros’ work is something that they can relate to on a personal level.

“For me, Esperanza, the main character of The House on Mango Street, that is me,” said Martin, noting she had a similar upbringing.

As part of the West High English 10 Honors curriculum, students read both a short story by Cisneros of their choosing and Mango Street later on in the school year.

Mango Street is one of Cisneros’ most popular novels among schools. The book shows the struggles of being a Mexican-American, or Chicana, girl who lives in a poor neighborhood and is just beginning to grow up.

Through novels, short stories and poetry, Cisneros draws from Mexican heritage and her childhood to convey differences in race, gender and socio-economic position.

Not only does Cisneros draw attention to cultural divisions, but she has also opened opportunities for other Latina authors.

Lan Samantha Chang, the director of the Iowa Writer’s Workshop, introduced Cisneros to the audience at Macbride Hall:

The crowd, made up of people from a variety of ethnicities, gathered to listen to Cisneros, all eager to learn. She reads and speaks in a unique way which elicits reactions such as laughter and applause from the crowd.

“I know one thing for sure, and House on Mango Street taught me that if we create something for those we love with all our hearts, with no personal agenda, siempre sale bonito, it always comes out beautiful,” said Cisneros during her reading at the Macbride Hall.

Cisneros shares that she began a sort of spiritual journey after getting into a car accident as a pedestrian here in Iowa City while she was a student of the creative writing program. After the event, she asked herself what her purpose was on the planet, what her gifts were and how literature could change the world.

She pulls from her past to create inspirational and relatable stories. “My work is spiritual and it’s political. I aim to counter and balance the evils of the world. I dedicate myself to the service of others by first connecting to my ancestors,” said Cisneros.

“I truly believe that the work each of us, in this room, does, can and will make change for the better,” Cisneros says before introducing her first reading of the night. One of the books she reads for inspiration is called El Libro de Abrazos, or The Book of Embraces by Eduardo Galeano. Cisneros opened with Galeano’s story to remind the audience that they all have a purpose in life and can do great things.

Next, she read her own piece, which she began writing around 2008 right after the death of her mother. It is a story that includes drawings. It is currently untitled but soon to be published.

Finally, she read a chapter from Caramelo, a 2002 novel. The story is about a girl called Lala, the only girl in a family of seven children. Cisneros dedicated the chapter she read to her aunt, Edna Cisneros.

At the end of the reading, Cisneros stayed late to meet members of the audience and to sign books.

Despite gender and cultural divisions in this day and age, one thing is to be remembered from her visit. That one thing is that no matter what situation you are in, it will always get better. “Siempre sale bonito.” Siempre. Always.