Since chronic traumatic encephalopathy (CTE) was discovered in the early 2000s, knowledge on the subject has slowly begun to accumulate. However, it was not until its movie, Concussion, was released in late 2015 that the public began to worry about the condition.

Though it has been known for over a decade, there are still comparatively little known facts about CTE. Additionally, most of the research has been done on the brains of former professional football and hockey players, discluding many age groups and athletes.

The lack of evidence of a correlation between this condition and high school athletes may resolve in coming years, but for now students look to their diagnoses as signs of whether to continue participation in their sport. 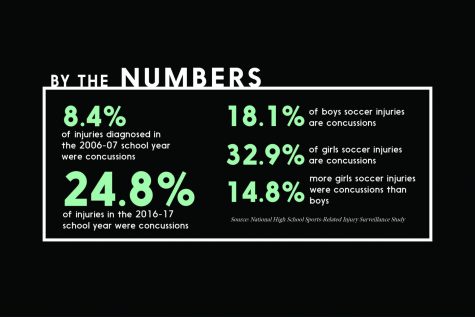 “It also made me a lot more cautious about high school cheer and how unsafe it is, because in all my three years of cheering no one has ever gotten injured [as much],” Gibson said. “It’s been the first two months [and I have had] head-neck injuries, which shouldn’t be happening so that makes me a little nervous with it.”

Halvorsen, having never suffered a serious injury from football, was taken off guard when he was diagnosed with a concussion. Now back to playing, he takes safety into account when tackling.

“Now I’m just a little more cautious. I’m a little more safe with the way I hit people, because I didn’t like having a concussion, so I don’t want to give someone [one] even if it’s an accident,” he said.

Even before diagnosis, Halvorsen clashed with his mother on their opinions of football.

She always tells me that later on in life people are just going to stop playing because they’re going to realize how bad of a sport it is because of injuries but it’s not going to stop me,”

“She always tells me that later on in life people are just going to stop playing because they’re going to realize how bad of a sport it is because of injuries but it’s not going to stop me,” he said. “Personally I feel safe enough because it wasn’t a huge concussion. I feel like maybe if it was my second concussion or third then maybe I’d be more scared about it, might take a break for a year or something like that, [but] I feel like it’s very hard to get one. You don’t just get one from a little hit; it takes a big hit to get one.”

Dr. Granner, as a parent having experienced his son playing football, believes he members the demographic that may ultimately decide the fate of high-concussion sports.

“It’s impossible to make football a completely safe sport, but the reality is soccer isn’t a safe sport, or basketball isn’t completely a safe sport either,” he said. “If the sport faces an uncertain future, in my opinion it’s going to be in the hands of parents who either let their kids play or not.”