One year after the inaugural Women’s March in Washington D.C., hundreds of people were seen in downtown Iowa City carrying posters and donning pink clothing to support women’s rights. 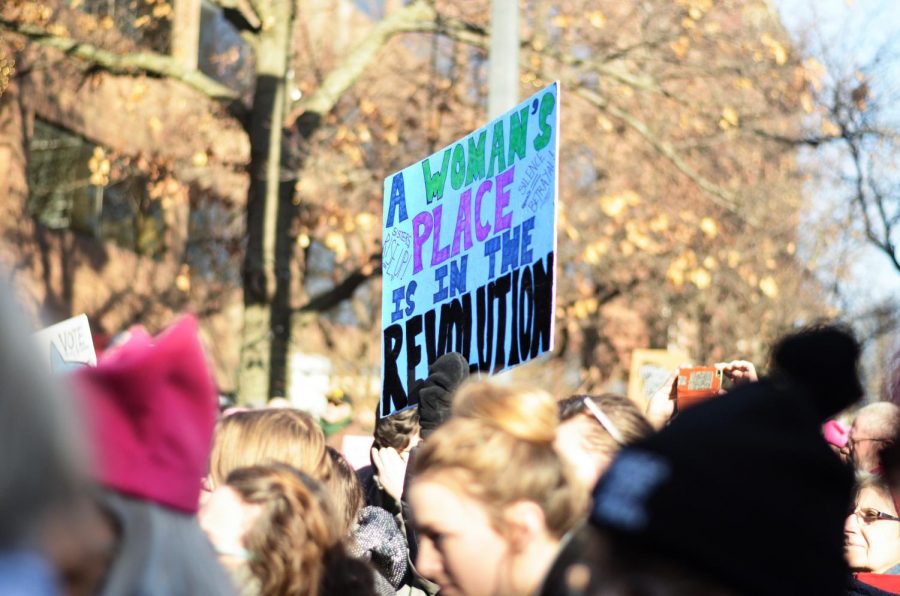 Hundreds of signs geared towards empowering women were seen at the Iowa City Women's March on Jan. 20.

This call-and-response formatted chant is just one example of how protestors in Iowa City showed their colors on Saturday, Jan. 20, when over a thousand people from across Eastern Iowa gathered for the second annual Women’s March.

Beginning in 2017, this relatively new tradition was initiated in response to President Donald Trump’s inauguration when hundreds of thousands of people gathered for the “Women’s March on Washington” after he was sworn in. Since then, the Women’s March has transformed from a scattering of protests into a movement still continuing to sweep the nation today.

Marches were held in 673 cities around the world. Called “sister marches,” they allow people all over the country to protest for change in their own towns. The 2018 Iowa City sister march was organized by Beth Gier and Dawn Willging only two short weeks before the event.

“While discussing the possibility of carpooling to Des Moines for the event there, a group of us wondered why there was nothing planned for Iowa City and thought, ‘Maybe we could plan something,'” Gier said. “No one in the group knew everyone else before we started, but everyone knew at least one other person.”

Women and men of all ages and ethnicities joined together to hear speeches from leaders throughout the community, like recently-elected ICCSD school board president Ruthina Malone and Iowa City councilwoman Mazahir Salih.

Malone spoke of her commitment to “dismantling systems of oppression” and cited Women’s March principles as inspiration to continue fighting for equality.

“After the presidential election last year, I wanted to be an agent for change to ensure all women had a voice,” Malone said. “I was privileged to have outstanding women invest countless hours in my campaign to ensure that I was successful, and I know that without their support, I would not be here today…. [My] run gave me an opportunity to show my daughter and her friends, as well as other minority girls, that anything is possible, and that we all have a right to be heard and seen.”

Following Malone, Salih reflected on her journey to becoming the first Sudanese elected official in the nation, saying that, “I have been told that I am the first, but I’m not going to be the last.”

She also spoke of how citizens can take action to invoke change in ways beyond posting on social media.

“Do not wait around for the next November,” she advised. “Be strong. Be physically present for the things you believe in. Do not just post a Facebook and send Tweets. Show up. Participate … We are together. We are the future. We will not stop. We will make this world a better place. We are women, and we are strong.”

Other prominent figures were also present, such as West High graduate and Iowa Senate candidate, Zach Wahls. Wahls marched along with hundreds of others, displaying a sign reading, “Raised by two women, marching for ALL women.”

“The sign says it all: I was raised by two women and I’m marching for all women,” Wahls said. “My moms raised me to believe that feminism is a radical idea, that women are people, and that’s important to me, so I’m just here in solidarity and I’m glad to be here.”

West students were among the hundreds marching at the event as well, and many shared sentiments of inspiration and positivity after the march.

“I actually teared up,” Isabelle Paulsen ’21 said. “There were a lot of people here, [and] I just am proud of Iowa City.”

“It just has such a strong, welcoming environment here,” Rachel Podhajsky ’21 added. “I was surprised by how many younger kids and older women were here. I thought that was really powerful, that it’s not just us teenagers getting angry at the world. [It shows that] everyone’s a person, that everyone is human.”

Emily Buck ’19 hopes that the large crowd will help motivate others to bring about changes that are favorable to women and other minorities.

“With the direction our country is going and has been going, I think protest is a necessary way to demonstrate our disappointment,” Buck said. “I wasn’t expecting this many people … [but] I’m really amazed and inspired that so many people showed up. I think that speaks a lot [and] shows that we can’t be ignored. We’re such a huge part of this country, and ignoring us is not going to make the issue go away.”

More information on the Women’s March movement can be found here.