With the start of the 1:1 program, the tech office anticipated that students might need to occasionally borrow a spare Chromebook. However, thanks to rising checkout rates, we may be seeing a Chromebook checkout epidemic. 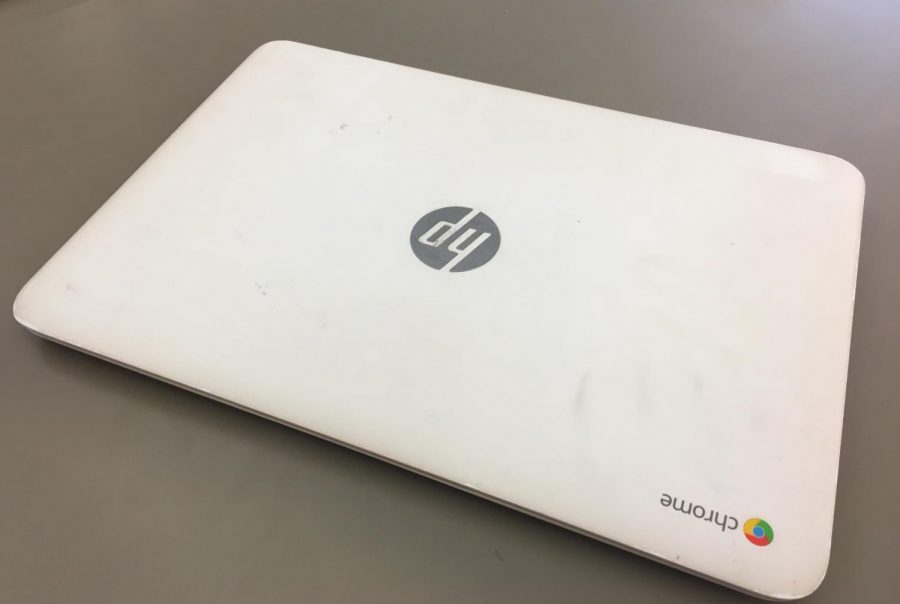 The white Chromebooks are one type of Chromebook that the tech office checks out as a spare. Therefore, they are sometimes referred to as "Chromebooks of Shame".

Despite this high number, the actual rates of Chromebook checkouts are a bit lower. On average, there are about 12 Chromebooks checked out in a single day. While one would hope that all students remembered their personal Chromebooks, this number is much less than Tyler Meade, a technical support specialist, expected before starting the 1:1 Program.

“My fear was that it was going to be 100 [Chromebooks] a day, because you just don’t know with so many kids in the school. Even 100 is a pretty small percentage,” Meade said. “The fact that it was only around 10 is pretty good. I would say less than expected, but even that being said, you kind of hope to always find ways to bring it down.”

If a student does need to check out a Chromebook, the tech office doesn’t want them out for long. All spare Chromebooks are clearly labeled, “one day checkout” on the inside, right next to the mouse pad.

“We like to have [spare Chromebooks] back by the end of the day you check [it] out. Even if you check it out sixth period, you should still return it right after seventh or as soon as you can,” said Sarah Tomes ’19, a tech assistant intern. “The return is in the box that says Chromebook return all over it. It’s not like we have to be there. You can literally just drop it in the box when you are walking by.”

“Being that they’re white, they kind of show their wear a little more. They’re not something that someone would want to use all the time,” Meade said. “It’s kind of the motivation to want to use your own because it’s probably in a little better shape.”

Taking home these loaner Chromebooks presents complications for the tech department. They only have a limited number of Chromebooks for people who need them.

“[Students] don’t have a charger for the spares because they’re different, so I know that if you haven’t brought it back in a day or two that it’s dead, and it’s just sitting somewhere when someone else can use it,” Meade said.

“They have to be on the cart for a certain amount of time before they are fully charged and can be useful,” Tomes said.

Nevertheless, missing and borrowed Chromebooks have become a rising issue. According to Meade, there are variety of reasons why a student may need to check out a spare.

“[I had to check one out], because I lost my original Chromebook in my room,” said Caleb Brandauer ’19.

In general, there are recurring times where students forget Chromebooks: after breaks and weekends. On a normal school schedule, Monday’s always boast the highest rates of forgetfulness amongst students, since they often don’t use their Chromebooks over the weekend.

“It tends to slow down throughout the week, because they remember or they may be just doing less or are less motivated to do anything in their class by Friday,” Meade said.

Many students forget to charge their devices at home and have to ask for a charger when their Chromebook runs out of batteries. However, Meade believes leaving your charger at home and charging it overnight is the most convenient option.

“The tough part is we don’t have a really accessible place to go plug in. I see students in some classrooms where they’re in some awkward area of the room where they can find an outlet. It’s not ideal for them to have to do that,” Meade said.

Instead of using the outlets in classrooms, students do have the option of using a charging station located in the tech office, which can be found right up the stairs of the library.

“If you forget your charger and you need to charge [your Chromebook], just drop it off here, [remember your] number and come back later [to] pick it up. You can check out a spare while that one’s out if you need to do an essay or something,” Tomes said.

Overall, the tech department urges students to bring their own Chromebooks to school in order to avoid a shortage. Furthermore, if you do need to check out a spare Chromebook, heed the warning that it is only a one day check-out and borrowed Chromebooks should not be taken home.

“If I check out 25 in a day and only get 15 back, now my availability for the next day is lower,” Meade said. “Even if they come back the next morning, well then now they’re dead and they’re useless until they get charged up again.”