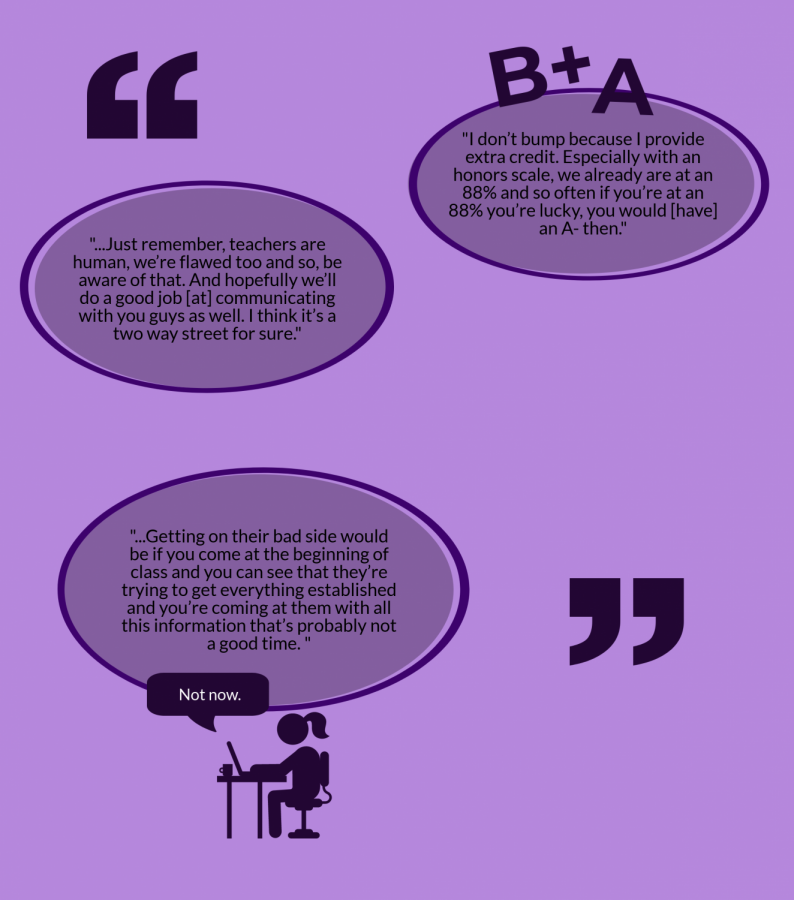 Darci Witthoft (DW): The first way would be just simply to contact [teachers] in whichever way that you feel comfortable. So you could send an email or come to class early . . . But the first step is just asking and doing it in whatever way makes you feel comfortable. Because I know sometimes teachers may seem intimidating and so maybe in the email, you’d feel a little more comfortable. I think it’s wise to [say what it’s in reference to in an email].

WSS: Would you rather communicate through email or face to face?

DW: It depends on the severity of the problem. If it’s something that’s going to take some time then [I’d] appreciate an email so we could set up a time where we can meet during lunch or whatever and sit down and have a conversation. Sometimes if you come up right away . . . then I think people can get caught off guard and sometimes things can go south . . . So if it’s something where you’re really feeling like you’ve been wronged, I think it’s wise to just send an email and say what it’s in reference to and indicate that you’d like a time to visit one on one and maybe put when you’re free.

“I think the easiest way to stay on their good side is communicating and being honest.””

WSS: When writing an email, how formal do you think students should be?

DW: If I’ve worked with them for a while and we have a report, I’d think it would be weird if they were too formal. But in general, I’ve never had a bad email so far. The worst emails would be if you’re angry and likewise. I try not to do that either like to send a student [an accusatory email] saying ‘well you didn’t turn this in, blah blah blah’ . . . I think the best way is to be like ‘Hi, this is Jim from whatever class and I was just wondering about this assignment. Is there time where we can talk about it?’ or ‘I’m going to be missing these days and I’ve looked at the calendar.’ . . . I don’t think overly formal. I don’t want them to be calling me ‘Hey, Darci’ [either].

WSS: How should students go about telling you they’re going to be absent?

DW: I appreciate if they’d send me an email . . . Like right now there are so many people gone and they’ve all told me but [they have] all told me [at once] and so I can’t keep track of what time . . . I think it’s wise to send an email or see me after school where we can sit down and go over it. But I have a day by day calendar so it’s really nice that they can look at that. And I’m really impressed when a student says ‘Okay, I’ve already looked at the calendar. I just want to make sure that I’m on the same page’ and they come to me saying ‘I’ve got this already figured out.’ Then I’m like ‘Wow, thank you.’

WSS: What’s the best way to explain when/why you didn’t do your homework?

DW: I think honesty. But don’t blab. I appreciate honesty but when you wear a badge of honor. Like if you are like ‘Oh, I didn’t do that reading in class’ and thinking it’s a cool thing. That sends the wrong message . . . Be honest . . . or send an email with a good explanation because sometimes there are good reasons. Just know too that there might be consequences. Don’t assume that . . . you’re going to be getting this extension or whatever because that’s a hard precedent to follow. If I allow one student who just decided not to read one night then all of a sudden another student will come and say  ‘Well, you didn’t hold so and so accountable.” So you have to understand too [that] we try to see things from your perspective. It’s always nice when students see things from our perspective.

DW: I think again communicating. Coming up and either via email or talking to me. But you have to think . . . if it’s right at the beginning of class when the teacher is trying to get everything settled and established, that probably isn’t the best time to have that conversation. So either if there’s a time after class or if you know their prep periods. I think you’ll have a better experience because the teacher won’t be rushed and they won’t be reacting.

WSS: What’s the easiest way to get on a teacher’s good/bad side?

DW: Like I said, doing it in a way that is respectful to everyone. Like giving a heads up, probably getting on their bad side would be if you come at the beginning of class and you can see that they’re trying to get everything established and you’re coming at them with all this information that’s probably not a good time. And just don’t be a repeat offender. That’s for me the big thing. If it happens once, I get it. Things happen. But if every reading quiz you come to me with an excuse for why you’re not doing the reading then I’m less likely to be empathetic towards that.

WSS: How can students connect with a teacher outside of class?

The one thing that you should always avoid doing is jumping on the bandwagon. If a student complains about a grade, that is one pet peeve . . . and that’s a fine line.”

DW: Maybe say ‘I need to talk to you and these are the times I’m available.’ Think it through so that we can quickly decide a time where we can get into it more in depth. That I don’t mind. But it’s when they come and they are not prepared. Like they obviously [are just] putting it on you to figure out everything.

WSS: How can you form an outside of class relationship with your teacher?

DW: I think coming to lunch or seeing them during lunch. Or stopping in during their prep periods. But letting them know. Just again, it’s being aware. If you see a teacher working then maybe just stop by and say hey just for a few minutes. I have kids do that all the time and I love it. But they get it. They get [that] I have a lot of stuff to do . . . I like that, I appreciate that.

WSS: Best way to ask for a bump in your grade?

DW: I don’t bump because I provide extra credit. Especially with an honors scale, we already are at an 88% and so often if you’re at an 88% you’re lucky, you would [have] an A- then. So if you’re at an 87% I’m not going to bump you because it’s already established in the grading scale. And the thing you have to think about too from a teacher’s perspective if you come in and say, ‘I’m at an 89%, will you bump me?’ I have to ethically go through and do that for all my students and [I’m not a huge fan of that] especially when students haven’t taken advantage of [extra credit] or if they have late assignments. That’s kind of my rule of thumb if they’ve done everything. Like they’ve done all the extra credit, turned in all their work, [been] really good participants, then I would really think about it. But those are rare cases because usually kids that do all do well and are at the grade level that they fully deserve.

WSS: How can you joke around with a teacher without going too far?

DW: It’s common sense . . . just body language and signs. The one thing that you should always avoid doing is jumping on the bandwagon. If a student complains about a grade, that is one pet peeve . . . and that’s a fine line. Obviously, if I’ve asked a question and everyone’s missed it, then I have to shine the flashlight on me and look and see [that] that question obviously was not worded well. So that doesn’t bother me. I get that. But there are those students that are just nitpicking points.

WSS: How would you go about asking for a letter of rec from a teacher?

I just want to really emphasize the importance of communicating in a respectful way. Because I do think that if you communicate respectfully then everything else kind of falls into place and things go well on both ends.”

DW: Those take a long time, so just be respectful . . . If you really want a teacher to do it then make sure that you’re not double-dipping. Like having more teachers write than they need to. Because that is a very time-consuming thing. But the best thing to do would obviously ask them in advance, at least a month before they need the letter. Then, I ask for an academic resume and also I ask them to write a paragraph or two about an epiphany they had while they were working with me on whatever assignment or whatever essay or whatever writing that they felt like they really did exemplary work on and write about that specifically. I can make the letter unique to them. So I would definitely ask in advance for at least a month and I would have those two things ready to go.

WSS: Anything else to add?

DW: I just want to really emphasize the importance of communicating in a respectful way. Because I do think that if you communicate respectfully then everything else kind of falls into place and things go well on both ends. And just remember, teachers are human. We’re flawed too, and so be aware of that. And hopefully we’ll do a good job [at] communicating with you guys as well. I think it’s a two way street for sure. 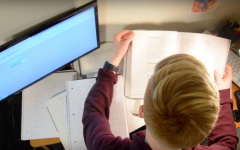 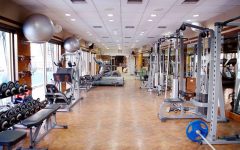 How to: keep New Year's resolutions 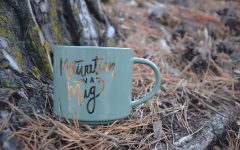 How to: shoot better iPhone photos 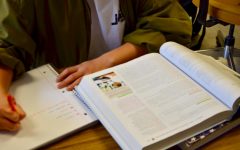 How to: study for finals