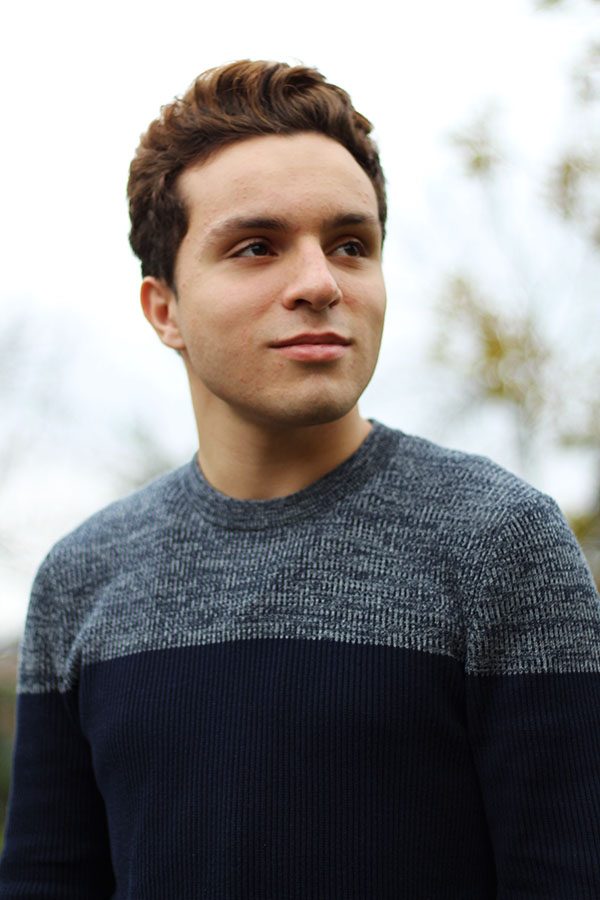 Breno Sader ’19 poses for his portrait in the courtyard.

Out of the groups represented in the LGBTQ+ community, lesbian, gay and bisexual members have perhaps had the most success in campaigning for civil rights legislation and visibility. Over the past 20 years, Supreme Court rulings legalized same-sex sexual conduct and eventually same-sex marriage. The rapid success of the gay rights movement has fostered more accepting coming-out experiences at West.

“No matter what, [coming out] is something you’re going to struggle with, but once you take that leap and actually come out, the [overall] West High environment is completely supportive,” said Breno Sader ’19, a gay student.

Michelle Kim ’20, a lesbian student, attributed newfound acceptance to the adjusting period that teachers and students have had to become acquainted with different sexualities.

“People are getting used to it,” Kim said. “It’s been a thing for a while that people don’t care about it.”

Albeit, the West community is still not perfect.

“There’s been a few occasions with people who aren’t okay with the fact that I’m gay,” Sader said. “Sometimes it’s that they don’t understand it and they’re curious about it, so they ask [generalizing] questions that they don’t really realize are homophobic.”

Psychology teacher Travis Henderson credits this ignorance to the idea that many students in the building who are heterosexual or cisgender are unaware of the mental dilemma faced by LGBTQ+ students.

According to Sader, rather than outwardly speaking against the LGBTQ+ community, peers are more likely to express discriminatory comments or homophobic actions discreetly.

“It’s not the remarks that I hear exactly; it’s just people who I know who are uncomfortable being around me,” Sader said. “They don’t like the fact that I’m gay; they don’t think it’s right, so they don’t want to be around me.”

Now, according to Henderson, discussions have shifted more towards promoting acceptance, not awareness.

“About half a decade ago, the fight was more about visibility,” Henderson said. “I don’t think people are asking for tolerance anymore or recognition of their existence. It’s not tolerance, it’s acceptance. It’s that [others] understand [the LGBTQ+ community’s] world view and they can empathize to some degree. And I think it’s 100 percent reasonable to be asking for those things.”

I don’t think people are asking for tolerance anymore or recognition of their existence. It’s not tolerance, it’s acceptance.”

Erin Netolicky ’20, a bisexual student, believes part of this acceptance would come from greater discussions of LGBTQ+ individuals in history.

“There’s so many strong, powerful figures [whose] sexuality is not mentioned at all or covered up,” Netolicky said. “Not having anyone historical to look up to furthers this perception that it’s just a millennial thing or just a Gen Z thing and that it’s not real.”

Many students and families still fear ongoing discrimination in life outside of the school environment, as well.

“My mom wasn’t at first accepting of it. She was very worried about what the world would do to me,” Kim said. “She sees all this stuff in the news about gay people being discriminated against just because they’re gay. My mom was clearly afraid that I would have a disadvantage at life because of my sexuality.”

According to Netolicky, simply understanding others’ experiences is one of the most powerful actions society can take moving forward.

“It’s important to remember that [LGB students are] humans too,” Netolicky said. “We shouldn’t be othered because of things that we cannot change. I feel that we’re more alike than we are different. Realizing what similarities there are is the first step to bridging that gap.”