We are not your enemy

In a time when the media is under attack, reporter Anjali Huynh explains how a trip to Washington, D.C. showed her why pursuing journalism is more important now than ever. 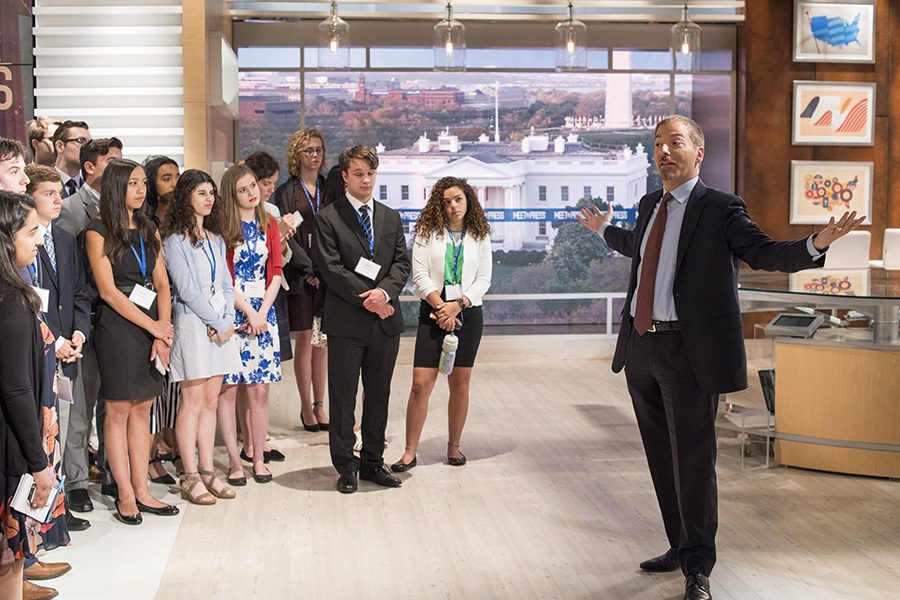 Credit to the Freedom Forum Institute

The gunshots ringing through the newsroom at the Capital Gazette this past summer struck more than five fatal victims. Those shots ignited fear in the hearts of every working or aspiring journalist in the country as this horrific event confirmed our worst fears: the war on the media was no longer a verbal threat but a very real, physical possibility.

Time and time again, the president of the United States has threatened the press. Donald Trump, a man considered the leader of the free world, explicitly said, “The FAKE NEWS media … is the enemy of the people.” These words have since sparked hatred towards a group striving to inform the public on their surroundings. Resultantly, the United States’ current climate consists of one in which others belittle opinions that dare to differ from their own and blatantly dismiss the truth.

Being told that journalism is considered a “dangerous” job would send any sane-minded person running. As an aspiring journalist, I had my doubts about pursuing this supposedly unstable, threatening occupation. After all, journalists are not known for having financial stability, nor for having simple jobs. However, little did I know that the answers to my pervasive doubt lay in a conference that would shift my entire life course.

The Al Neuharth Free Spirit and Journalism Conference is a five-day, all-expenses-paid event in Washington, D.C. that brings together journalists from around the country. This event takes place in June and is named after the founder of USA Today, Al Neuharth. Each year, after hundreds of rising high school seniors from around the nation submit applications, the Freedom Forum Institute selects one student from each state and the District of Columbia to attend this prestigious event.

Applying was a long shot, to say the least. After all, surely there were far more talented journalists in Iowa than I. Yet two months after applying, I glanced down at my phone one day to see an email with a subject line screaming “WINNER.” Beyond thrilled, I spent the next two months dreaming about having the honor to represent the state of Iowa at a national conference.

On June 16, I entered the Eastern Iowa Airport, bags packed and ready to board my flight. Never before had I flown on a plane alone or attended an event without anyone I knew. Though these feelings were mildly jolting at the time, it was nothing compared to the experiences and people that awaited me in the nation’s capital.

For five days, we heard from the best and brightest of the journalism world: Pulitzer Prize winners David Fahrenthold and Sara Ganim, “Meet The Press” host Chuck Todd, New York Times photographer Doug Mills and former press secretary Mike McCurry, to name a few. And with each new person that spoke to us, I gained more insight on the importance of journalism. From uncovering Trump charity discrepancies to dealing with the aftermath of the Bill Clinton scandal, these individuals saw history happening before their eyes and were the first to tell its stories.

As I listened to these icons, toured D.C. and ate ridiculously fancy food, I pondered my future. I had asked each speaker the same question, regarding whether the Trump administration’s words and actions ever deterred them from pursuing journalism. To my surprise, they answered rather similarly, saying that because we are under attack, it is more important now than ever to be a journalist in this country. Considering this, I asked myself, “Why would I not want to be part of this great legacy of storytellers and truthseekers?”

But what was most instrumental in solidifying my path were the students I met. In those magical five days, I found myself surrounded by 50 of the most talented, hardworking and genuine high schoolers in the nation. Despite our different upbringings and viewpoints, we united towards a common cause of speaking truth and uncovering the untold. In a time where the credibility of journalists is consistently undermined, these students demonstrate the integrity and drive of professionals. Their ambition and ingenuity inspires me to work harder, to pursue my passion even when others tell me I’m crazy. So long as they are out there, journalism will never die.

Since the formation of this nation, the news media has remained an integral part of American society. After all, freedom of the press is stated in the very first amendment of the Constitution. It is considered the fourth estate of government, where people turn to when they don’t know who to trust or what’s going on. For this reason alone, we are not the enemy of the people. It is more clear than ever that the American people need the news. They need the fact checkers, the news writers, the photographers and videographers and all the rest to hold others accountable and to share the voices of those silenced.

When first seeing the Neuharth quote, “Dream. Dare. Do.” displayed on our bright blue conference t-shirts, the phrase meant nothing. Now, it means everything. This advice from Al Neuharth represents what a journalist’s role truly is. We are not fear mongers or vulgar liars; we are human beings that push boundaries and work to make a difference.

So to all the journalists out there, I encourage you to keep dreaming, keep daring and keep doing. The work you do is valid. You are not the enemy of the people. Now, perhaps more than ever, the world desperately needs free spirits fighting to tell the stories that others do not want told.