For seven years Renee Gould ’22 has been showing dogs. Through difficult times and family stressors, dogs were a constant in her life to provide a sense of confidence and companionship. 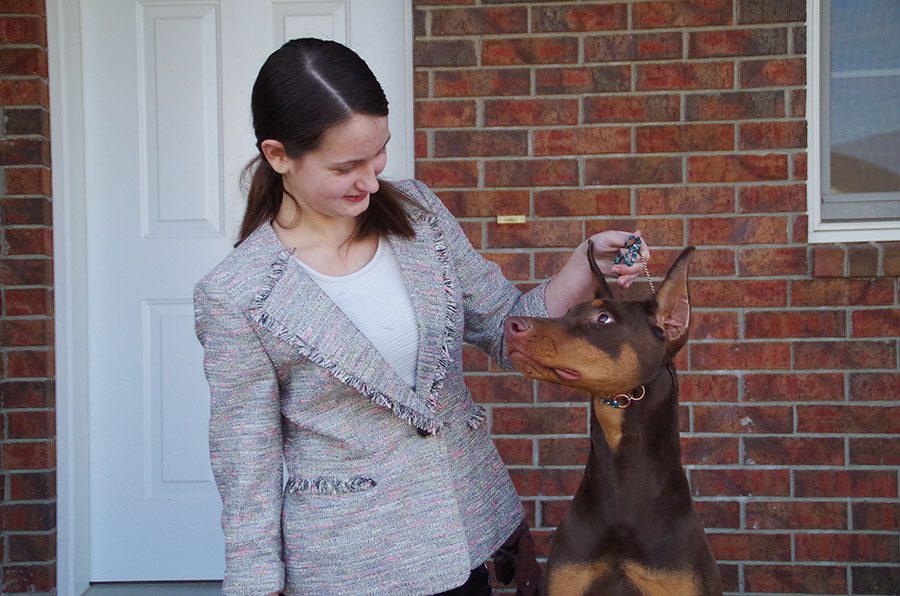 Renee Gould '22 shares a glance with her dog Mocha.

Hundreds of dogs yelp and run around the concrete building. Every single bark echoes throughout the whole of the room. Along with animals, a few spectators and owners crowd around the performance area watching the dogs prance around the ring. As a young child competing in her very first dog show, this was a new experience. Today it is a common scene for Renee Gould ’22.

Gould first got the itch for showing dogs from attending shows with her parents when she was very young. On one of her many excursions to dogs shows, she realized she’d rather be on the floor than in the audience. Although she wasn’t planning to compete that day, the judges allowed her to show her dog Lacey, a doberman pinscher.

“They let me go in and show, and I got a big ribbon and had a blast,¨ Gould said.

That day was only the beginning. Gould has since competed in hundreds of dog shows, most of them in the Midwest and South regions. At home she has a plethora of ribbons.

¨I’m not even kidding, I have a wall of ribbons in my room, and I can’t even fit all the new ones,” Gould said. “Now they are literally just sitting on my desk in piles.¨

Gould grew up going to dog shows, as her parents had hosted them in the past. Her parents have been working with dogs since before Gould was born, so her interest in showing dogs excited them.

“This is sort of an obsession that began for me and my husband twenty years ago,” said Colleen Mitchell, Gould’s mother. “We would raise puppies to be pilot dogs for the blind, … so that’s how we got our first doberman puppy.”

After her first show, her training intensified to focus on her handling of the animal. Every weekend, Gould goes to a training class in Muscatine to work with her dogs.

“Any old fool can take a dog, put them on a pretty leash and run around the ring, but there’s so much more to it than that,¨ Gould said.

When Gould wanted to get serious about showing dogs, she and her family added a doberman named Dolly to their abundance of canines for Gould to compete with. Gould’s family has owned two toy fox terriers and five dobermans over the course of the years, but there have been many other litters of puppies in and out of their house.

Mitchell noticed that Gould’s involvement in dog shows has both given her more confidence and taught her sportsmanship. She has also learned how to communicate her ideas to authority through talking with the judges.

However, Gould’s life hasn’t been all blue ribbons and trophies. In elementary school, Gould faced bullying and the shows didn’t improve her social situation at first.

“[The shows] just made me feel more isolated,” Gould said. “Here I was missing school to go to something that nobody else knew about or even cared about.¨

Though the shows made her feel like an outsider at times, the companionship between Gould and her dogs provided an escape while she dealt with bullying.

“My dogs had the ability to completely alter my mood,” Gould said. “… It was something to lean on besides myself.”

Gould became so connected to the dogs that she would feel distressed when one was away at the vet.

After some time, Gould learned to accept herself and value her own opinion more than that of others. It made Gould feel good to succeed and that became more important than what others thought.

“It’s always nice to see one of your friends break out of their shell,” said Isa Anderson ’22, who has been Gould’s friend since middle school.

Besides bullying, the summer before her eighth-grade year, Gould faced another hardship: her mother was suffering from spinal leakage. Gould felt helpless and scared while her mother was sick. For a little over three months her mom was in and out of the hospital.

The illness required Gould to take on more responsibility, especially in caring for the dogs. She would wake up early to let the dogs out, feed them and check on the puppies. When not looking after the canines, Gould was visiting her mom and trying to make life more comfortable for her.

“Every evening we went and visited her in the hospital if she was there, or if she was home, we would just make sure she had everything she needed,” Gould said.

Her mom has since made a recovery, this startling experience was a harsh reminder that Gould and her loved ones weren’t invincible. She also realized that time is best spent with the ones you love and doing the things that make you happy.

“Life is kind of just too short to really care what people who you don’t know think,” Gould said.