The Women of Troy hosted Linn-Mar for the second round of regionals on Saturday, Feb. 16. 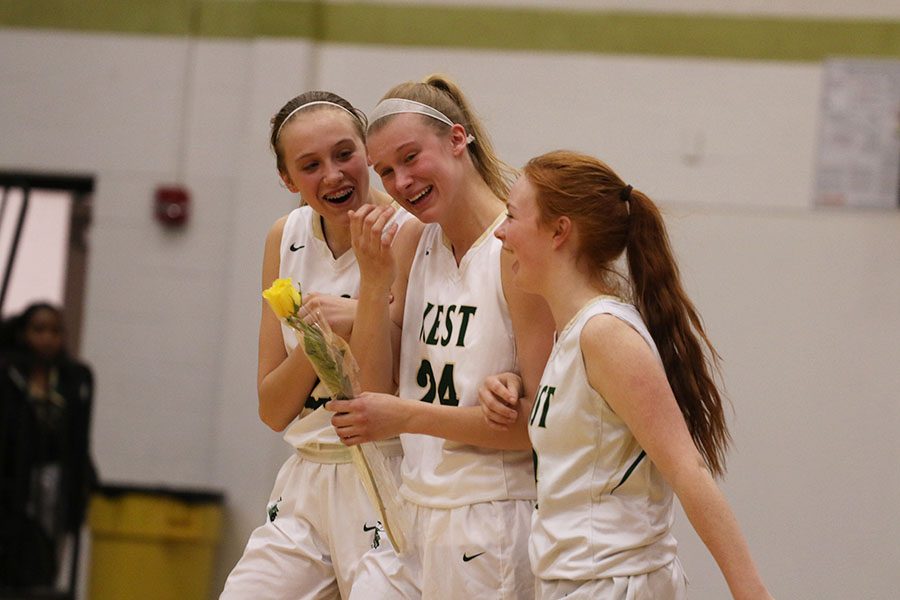 Emma Koch '19 sheds tears as she walks down the court with Audrey Koch '21 and Rylee Goodfellow '21 during the senior recognition after the game on Saturday, Feb. 16.

The girls basketball team began their regional play at home against Linn-Mar on Saturday, Feb. 16. Emotions ran high as it was their last game of the season at home. The Women of Troy came out fighting. In a close first quarter, West led 10-6. Going into the second, West led by 10 points, 24-14. With momentum from halftime, West added 28 points to their score as they entered the fourth quarter. Linn-Mar was able to add 10 points to their score as well to make it 52-24.

During the fourth quarter, head coach BJ Mayer put in Emma Koch ’19. Emma tore her ACL before the season started and hasn’t been able to play. For Emma, being able to play during senior night was special.

“It was amazing. After not being able to play for my whole senior season, it was really special that I got to dress and go in on senior night,” Emma said. “I am so thankful to have coaches and teammates that let me go in during a big game.”

In the end, West prevailed and defeated the Lions 60-41. Audrey Koch ’21 lead the Women of Troy with 24 points followed by Emma Ingersoll Weng ’22 with 12 points.

“We were close with Linn-Mar for a while in the first half, but … we never let down our [guard] and force[d] many errors,” said guard Cailyn Morgan ’19. “I think we did a good job on defense knowing who we were matched up with and [worked] well as a team.”

Due to the polar vortex, the girls had been unable to have a senior night recognition. After being postponed three other times, they were able to celebrate it after the game.

Emma shed tears as she walked out during the recognition.

“I was trying to enjoy the moment. All of the girls had put in four years of hard work at West and being recognized in front of friends and family is really fun,” Emma said. “I was really grateful for all the support my coaches, teammates and the crowd showed when I walked out. It was a really cool moment.”

West will battle Waukee for a spot in the Iowa High School Girls State Basketball Tournament. The Women of Troy will travel to Waukee on Tuesday, Feb. 19. to play at 7 p.m.

Going into the second round, West will be preparing in the little time they have.

“We are definitely going to be working a lot on our offense and practicing different ways we can score and get the ball to people who can score,” Morgan said. “We are also going to be watching a lot of film to scout out our next matchup. We are going to work as a team to figure out our game plan.”