This week freshmen, sophomores and juniors were required to take a new standardized test. Ken Wilbur gives his perspective on the ISASPs and whether it’s a worthwhile evaluation. 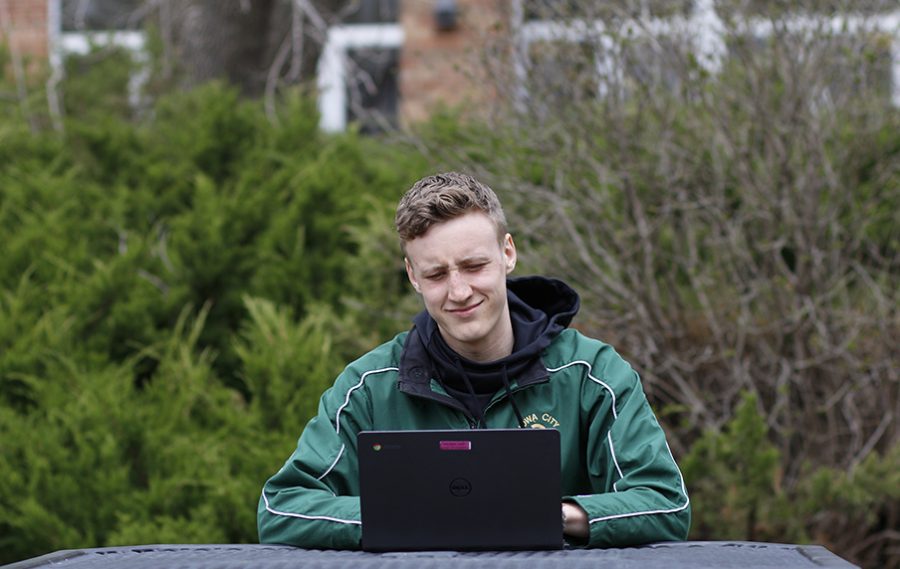 Ken Wilbur '20 frowns as he reads an email about the ISASP testing schedule.

From ITBS to Iowa Assessments to ISASP, the flaws in the tests are glaring. On the morning of Tuesday, April 26, 2019, West students in grades nine through 11 began the first section of the three-day-long Iowa Statewide Test of Student Progress (ISASP) exam. Although it is one of many standardized tests West students will take this year, the ISASP differs from its companions in that it is taken on school-provided chromebooks. The ISASP acts as a replacement for the former Iowa Assessments, but to say the ISASP moved past its predecessor’s flaws is a stretch.

Unlike other standardized tests a high school student takes, the ISASP gives students no incentive to perform well. For instance, if a student were to earn a score in the bottom tenth percentile on the ACT, it would directly limit that students postsecondary options. On the other hand, if a student were to score in the bottom ten percentile on the ISASP, they would see no direct or personal consequences.

This quality alone is not inherently bad; the test is meant to identify students who need help, not to punish them. However, when students realize they won’t be punished for not providing their best effort, they lose motivation to do so. This devalues the test in its entirety, because when mediocre or negligible efforts are accepted into the datapool, lower percentiles will be inflated. Students who need more help are thus more difficult to identify, indistinguishable from those who could have done better. Of course, school administrators could use other methods of measurement like GPA or performance in class, but what purpose would the ISASP then serve?

Pearson, the company that created the ISASP, lists ten primary goals for large-scale assessments which it provides on its official website. Seven of the goals for assessments are essentially to evaluate and extrapolate upon individual student performance. The rest are to “measure core standards”, “evaluate programs” and “support accountability”. The last three reveal the true nature of the ISASP: a test designed to satisfy bureaucratic government requirements over student needs.

Tests like the ISASP and the former Iowa Assessments enjoy their nearly universal acceptance because they are ingrained in Iowa Core legislation passed by the state legislature. The state requires schools to take standardized tests in order to prove that they are up to standard, penalizes schools that would decide not to and even provides millions of dollars in subsidies for the ISASP specifically. These factors make it impossible for schools to decline the ISASP, even when it wastes valuable school time and provides little implicit benefit.

Don’t get me wrong. Standardized testing is a powerful tool for identifying an individual student’s strengths and weaknesses in the classroom, especially when in elementary school. To its credit, the ISASP is pioneering new technology in standardized testing that could one day lead to massive improvements in quality and scoring time. But right now, those benefits fall on deaf ears for students in high school. A test that spans three days, over five total testing hours and from which students can glean no real benefit is a waste. High schoolers are busy, overworked and distracted, and when the education system presents them in which they have no personal stake, the question becomes, “Why?”