The Women of Troy lose in three straight sets to an impressive Little Hawk squad and surrender The Spike. 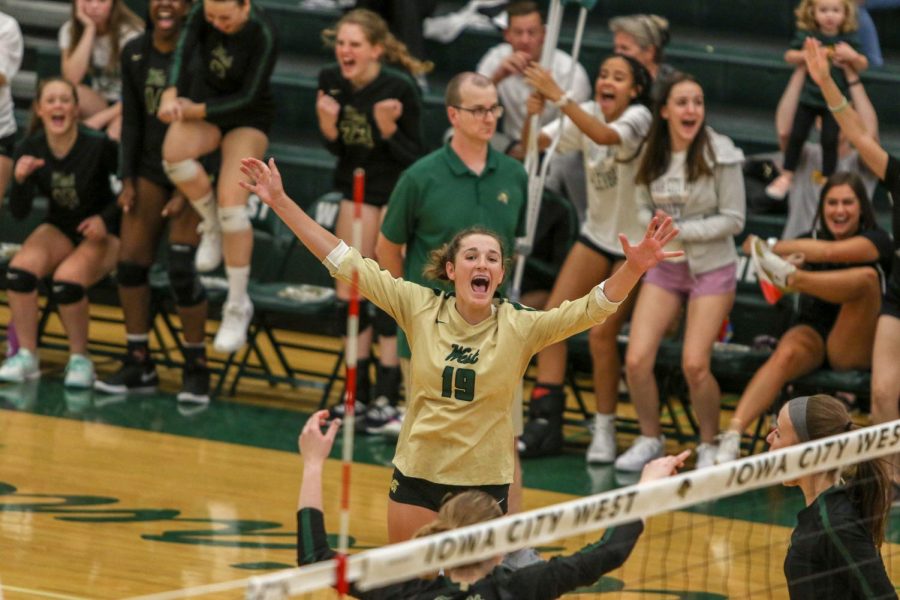 Katherine Kouba '22 celebrates a point with her teammates on Tuesday, August 27 during the Battle for the Spike.

Early season growing pains are expected from any group that loses their top six hitters and starting setter from a year ago.

The crucial part to growing pains is the growth that should inevitably follow, and head coach Scott Sanders seems ready to work through the challenges of a young lineup.

“I think it’s a good place to start,” Sanders said. “I think we shored up the middle. We are finding some height there and some consistency.”

Consistency was rare for Sander’s group tonight, as his squad fell to the Little Hawks in three straight sets. They also gave up The Spike, the game’s trophy prize, which the Women of Troy had held for the previous four years.

The team found themselves down 8-4 early in the first set. Miscommunication and failed serves proved detrimental to the young group. On many plays a ball would go between two players and neither would make an immediate move, resulting in late hits and multiple errors.

“We need to revisit (our mentality) some more,” Sanders said. “Some of that comes from having such a mixed-up lineup.”

Natalie Young ‘20 emerged as the team’s top hitter with two early kills to go along with two impressive blocks in the first set.

Young stands at 6 feet 1 inch tall, and is very crafty around the net, using a variety of line drives and soft bloopers to confuse the defense. Young, one of two seniors, is also tasked with leading the group of underclassmen from her spot as the main hitter.

“Natalie is already being a top-notch leader. Kids follow her pretty well,” Sanders said. “I think that she could get more consistent, a little more terminal on offense.” 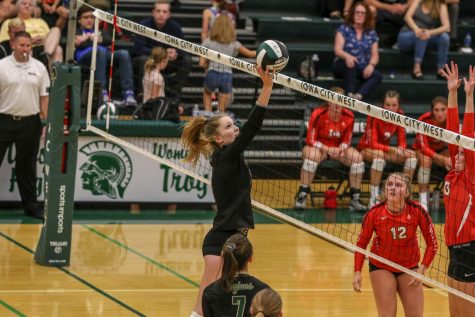 Owen AanestadNatalie Young ’20 tips the ball over the net on Tuesday, August 27 during the Battle for the Spike.

After losing the first set 25-15, the team regrouped and looked stronger to start the second set. Young followed up a kill with an ace to cut the Little Hawk lead to 7-6.

Emma Dunlap ‘22 was very solid from the setter position, giving Raina Pfeifer ‘22 and Young opportunities for kills during the second set. Dunlap, displaying her versatility, also batted a ball over the net to catch the Little Hawks off guard.

It seemed as though City was pulling away, leading 20-15 in the second set before Sanmati Thangavel ‘20 snuck an ace over the net to start a 5-0 run that tied the game at 20.

Misha Canin ‘22 played exceptionally well during that span, keeping balls in play and recording a block and a kill during that stretch. The Women of Troy battled but ultimately fell 25-23, placing them in a 2-0 hole.

Perhaps the brightest point from the match was the team’s 6-0 run to start the third set. Sanmati Thangavel ‘20 called out shots from the back row en route to two aces and a multitude of difficult digs.

Canin had a block and a kill during that run, looking strong as a partner to Young in the front row.

The Little Hawks responded with a 7-0 run of their own, killing any momentum the team had conjured. The team fought to come back, but the ship had already begun sinking and the Women of Troy lost the final set 25-13 as City High completed the sweep and claimed The Spike.

All hope is not lost, however, for this young group.

Ryann Culver ‘21 will be key to this team’s confidence early in the season. Culver’s stoic demeanor keeps the team focused and if she can improve her hitting accuracy, she could be one of the most feared hitters in the conference before the season is over. 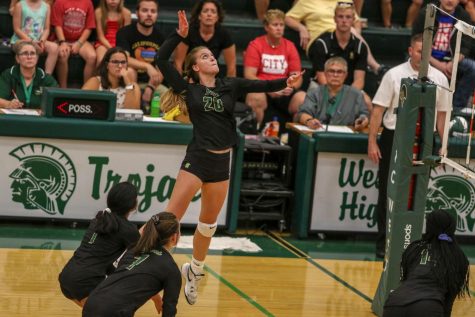 Owen AanestadRyann Culver ’21 winds up to hit on Tuesday, August 27 during the Battle for the Spike.

Being two of four returning varsity players, Thangavel and back row accomplice Katherine Kouba’s ‘22 communication and leadership will be vital to getting this young group on the same page. The pair commanded the back row during the end of the second and beginning of the third set as Kouba played the role of libero nearly perfect, sliding for digs and setting up serves.

Those two stretches are a starting point for the Women of Troy, who will be looking to improve in practice before a quick two-day turnaround.

The volleyball team plays three games as part of a tournament on Thursday, Aug. 29 at North Scott High School, the first against Pleasant Valley High School.