Alex McKane ’22 and Ken Wilbur ’20 lead the Trojans to a third place finish in a loaded field of MVC competitors. 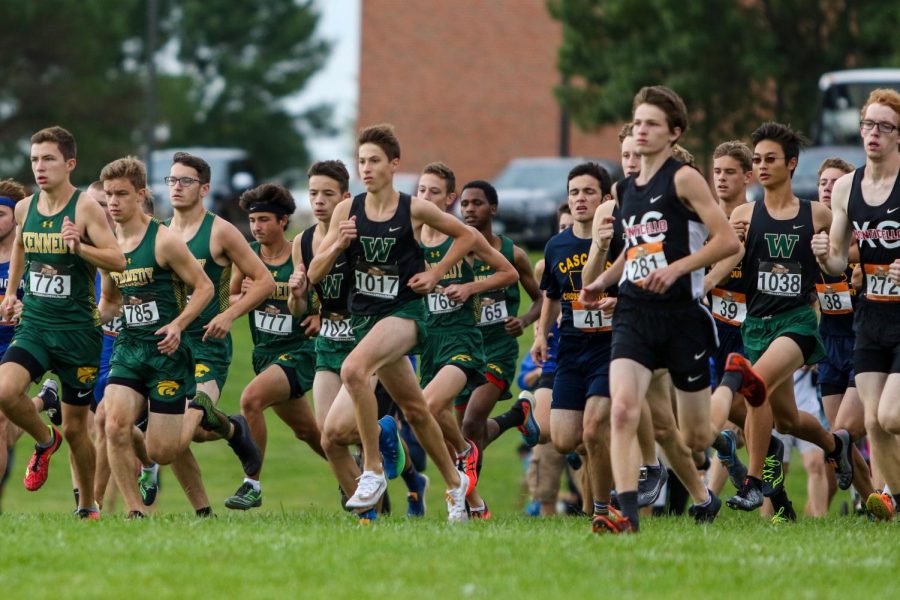 Alex McKane '22 and the Trojans sprint out of the starting line during the Prairie Invitational at Prairie High School on Aug. 31.

You’ve probably seen them before.

The herd of half-naked, skeletal creatures running in and around the West High campus is not a group of deranged zombies, but rather one of the most promising young squads in the state.

We are referring, of course, to the boys cross country team, led by second-year head coach Josh Kidman.

The Trojans opened the season with a third-place finish at the Prairie Invitational on Aug. 31 behind strong performances from Alex McKane ‘22 and Ken Wilbur ’20.

The meet featured multiple teams from the MVC conference in addition to Waukee and a number of smaller area schools. The loaded field rattled McKane initially, but he shook off his nerves to place tenth overall in a time of 17 minutes 11 seconds.

“The start of the season is always really nerve-wracking for me,” McKane said. “I try to go into all my races in a calm state of mind so I can focus on myself.”

McKane headlines a group of three uber-talented sophomores that includes Nicolo Schianchi (16th) and Caden Noeller (67th). The three have been training together for the last 18 months, and have developed a tight bond under Kidman’s training regiments.

“We’re really close, good friends,” McKane said. “We hung out a lot over the summer just training and having fun.”

Having fun is a big part of the new culture Kidman is looking to build in his second year as head coach. Kidman came into the program at the same time as McKane, Schianchi and Noeller, and knows those three will provide his program with great leadership and attitudes for years to come.

“I like to think of us as freshmen together. I’m super lucky to have them lined up on the cross country team,” Kidman said. “Whether they’re varsity or not, everyone has bought in to what they’re selling, and that’s hard work and that the fun comes with it.”

While the trio has loads of potential, plenty of upperclassmen have been leading this group during summer training and into the season.

Juniors Mohan Kumar (49th) and Alex Wang (58th) ran well today, both recording times just over 18 minutes. Seniors Ken Wilbur (12th), Raymond Yang (69th), Julian Wemme and Jack Gray have been in the program for four years and have seen the work it takes to compete at the state meet.

“(Cross country) is one of the hardest sports, a lot of people don’t do it because they were told it’s hard, but those guys welcome that,” Kidman said. “That’s the kind of people we look for and those are the guys that move towards the top.”

Kidman looks to improve the team’s mental toughness and race mentality before their next race on Saturday, Sept. 7 in Bettendorf.