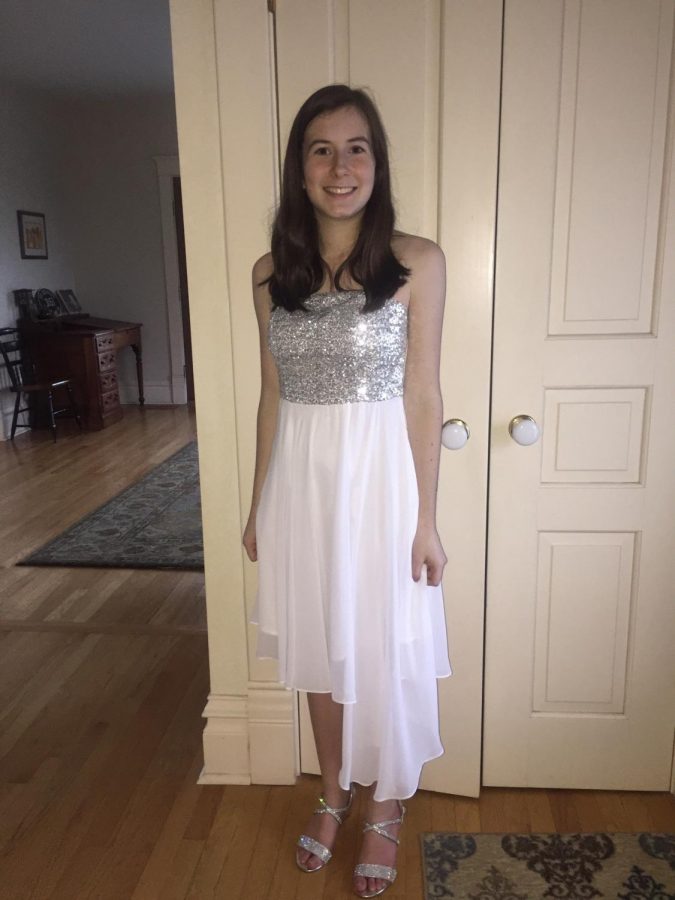 Eight grade Maia DeGrazia ’20 poses in her eight grade formal dress, the same one her mother was tailoring when she realized her shoulders weren’t aligned.

In preparation for Maia DeGrazia’s ’20 eighth grade formal, her mother was adjusting her dress. While her mom was standing behind her, adding clear straps to the sparkly strapless top of the dress, she noticed DeGrazia’s shoulders were uneven. Her mother has minor scoliosis, as does her grandfather, so it seemed likely that DeGrazia could also have it.

They went to the doctor and at the end of eighth grade, she was diagnosed. At that point, it was minor and stable. Her spine was an “S” shape, meaning it curved at the top and the bottom. The top of her spine was curved at 38 degrees away from a straight line and the bottom was curved 22 degrees. The doctors told DeGrazia that as long as it didn’t progressively become more severe it shouldn’t be a problem.

DeGrazia returned every year for an x-ray. The third time she returned her upper curve had jumped 10 degrees. The top curve was now 55 degrees off of a straight line and the bottom was almost 30 degrees off of a straight line. This sudden jump was strange because DeGrazia had stopped growing at the time she was diagnosed. Although it was out of the blue, Maia said she sensed this change has occurred, as she was feeling more pain leading up to her final x-ray.

“I knew. I don’t know how I knew. I think part of it was I did have chronic pain every day. It hurt to sit and it hurt, just stand for long periods of time. And there were some issues surrounding that and I did notice the pain getting worse leading up to that final x-ray,” said DeGrazia.

At that point, her back had been spasming more and she had an increase in muscle pain. Going about her day had become more uncomfortable.

“It was definitely problematic because you can’t just say to your teacher at school, ‘My back hurts. Can I go lie down?’ because they don’t take you seriously because they can’t see it, so I just suffered,”  DeGrazia said.

Due to the x-ray results and her chronic day-to-day pain, DeGrazia decided to get spinal fusion surgery.