Trojan defense steps up for third district win over Muscatine 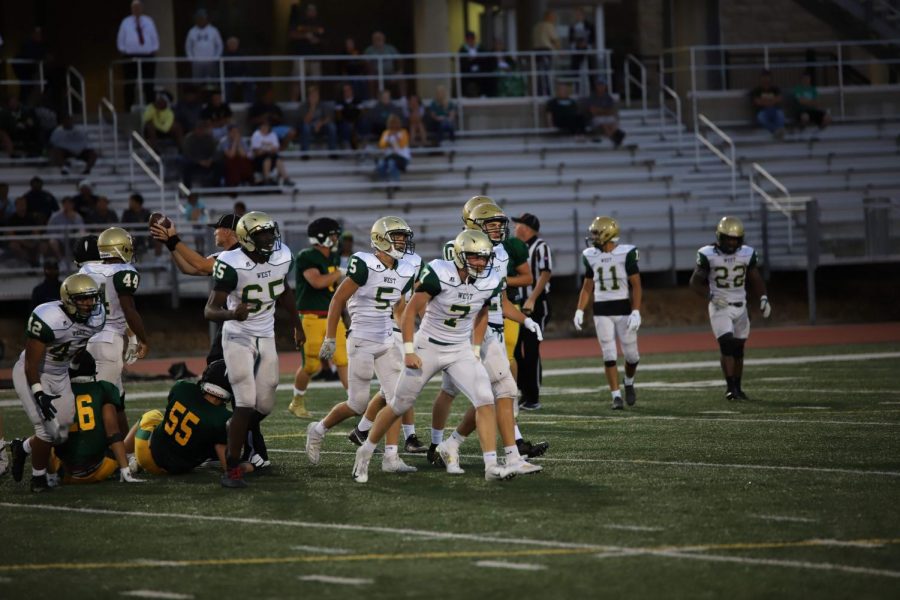 Linebacker Grant Henderson '20 leads the defense off the field after a big stop during a scrimmage against Dubuque Hempstead at Dalzell Field in Dubuque on August 23.

The team was far from perfect, but the defense stepped up when it had to.

Lots of players came up big for the Trojans’ third district win over Muscatine, but perhaps no one was more helpful than mother nature herself, providing a strong wind towards the north end zone which aided a couple of crucial plays in the team’s favor.

The Trojans defeated Muscatine 31-16 behind a school-record 51-yard field goal by Owen Smith ’21, hard-nosed running from Marchaun Hoover ’20 and a ninety-yard interception return from Grant Henderson ’20.

Henderson started the action with an interception early in the first quarter, one of four for the Trojans in the game. Foreshadowing his late-game touchdown, Henderson evaded would-be tacklers before falling just short at the one-yard line. Tyuss Bell ’21 punched in the opening score for his first touchdown of the game to put the Trojans ahead 7-0.

Later in the period, Smith trotted out for a 51-yard field goal, with a favorable gust of wind at his back, and slid one over the uprights to give the team a 10-point lead to end the quarter.

Grahm Goering ’21 caught at least a half dozen bubble screen passes, each time running for 10 or more yards after the catch. After last week’s game-winning touchdown, Hoover followed up with a consistent effort through four quarters, routinely running through Muskie defenders for five and six yards.

The defense was dialed in through the first quarter, holding the Muskies scoreless before quarterback Zander Morgan ’21 dropped a pass between two Trojan defenders to set the score at 10-7.

Anu Dokun ’20 was timing up well-executed blitzes, dropping a couple of Muskies in the backfield in the first half. Ian McAreavy ’21 was delivering some hard hits on the outside while Will Hoeft ’20 shored things up in the middle of the field, even catching an interception off of a batted pass.

Josh Flammang’s defensive line held strong on the goal line to end the half, resulting in a Muscatine field goal and an even halftime score, 10-10.

The team jockeyed for field position early in the third quarter before Marcus Morgan ’21 executed his typical third-quarter touchdown drive, buoyed by a nice interception and return from Tate Crane ’20. Morgan scrambled in the backfield on a third down before finding Crane in the back of the end zone, one of many toe-tapping catches Crane made on the night.

With the score at 17-10, Muscatine marched down the field before scoring on a direct snap to their running back. Electing to go for two, the Muskies tried the same wildcat formation on the conversion play, but were snuffed out by Ali Alwahdani ’20 and Mason Applegate ’22.

The Trojans responded with a touchdown run of their own from Fabian Brown ’21 on a sweep play, with the extra point putting the team ahead 24-16. The Muskies drove into the red zone, threating to knot up the score before the elements came to life.

The Muscatine quarterback threw a pass into the wind on third down, hanging in the air just long enough for Henderson to pick it out of the air and return ninety yards, breaking a few tackles on his way to the end zone.

The swarm of sideline teammates celebrated enthusiastically as the team secured its third district win, putting the team’s record at 3-5.

Next week’s Battle for the Boot against Iowa City High will be held at Bates Field on Oct. 25.