West wins thriller over City High and keeps The Boot

The Trojans defeated the Little Hawks in the 51st annual Battle for the Boot behind three touchdowns from Grahm Goering '21 and timely defensive plays from senior linebacker Grant Henderson. 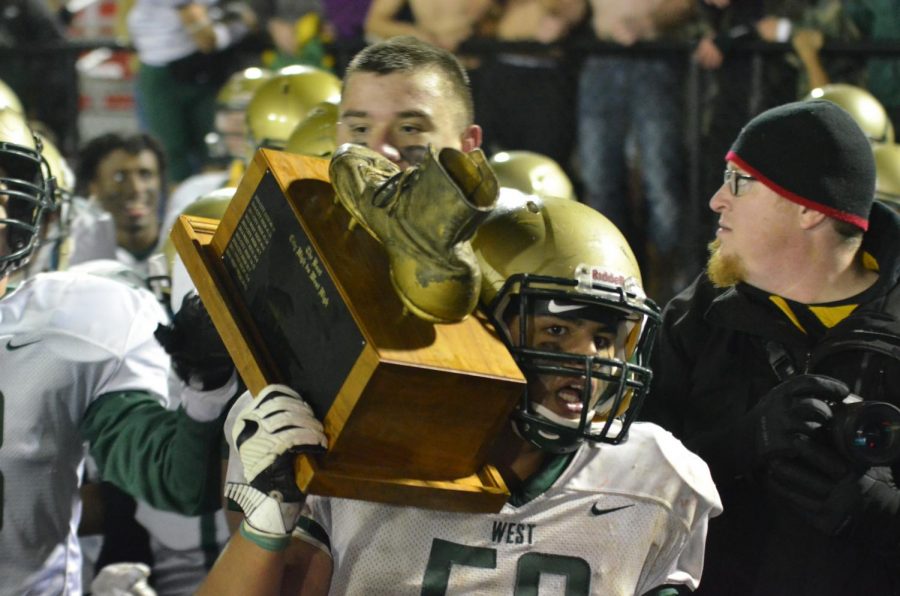 Makhi Halvorsen '20 carries The Boot into the locker room following the team's 36-32 victory over City High at Bates Field on Oct. 25.

“That was one of the best high schools games I’ve ever been to.”

That phrase was overheard from a passing City High fan following his team’s loss on Friday night in the 51st annual Battle for the Boot. West and City produced an instant-classic, resulting in five lead changes and some enthralling fourth-quarter dramatics that satisfied fans from both sides of the river.

Despite its lively ending, the game did not start out as the Trojans had envisioned during their pre-game relaxation session. Giving up two early sacks resulted in a City High drive in which Tonka Hickman ’20 ran all over the West High defense, punching in the score and two-point conversion to put the Little Hawks ahead 8-0.

Morgan fired back on the next series with two first-down throws on the next drive to Tate Crane ’20 and Grahm Goering. Fabian Brown ’21 made the most of his first start at running back, bulldozing through the City High defense before finally scoring on a sweep, his third such score in the three games.

Brown scores on a sweep, his third TD in three games. Two-point conversation to Grant Henderson ‘20 is successful.

In the last game of the season, Hartwig decided to roll the dice with a beautifully-executed onside kick from Owen Smith ’21 that fell into the arms of Mikey Brown ’21 near midfield.

The Trojans executed all three phases of the game all night. Special teams produced a touchdown and PAT block, while the offense ran up their highest point total of the season. The defense was shaken early on, but stepped up big in the fourth quarer.

After the onside kick, the City High defense was seeing double on the next drive as Fabian and Mikey Brown, who are not related, both converted first downs before Goering found Marcus Morgan on a Philly Special-esque play that offensive coordinator Andrew Durham implemented earlier this week.

City came out aggressive in the second half, driving the length of the field without completing a single pass to retake the lead at 26-22 with 3:17 left in the third quarter.

With the wind out of the Trojans’ sails, Goering found some daylight on the ensuing kickoff return, going untouched on his way to a 79-yard kickoff return for a touchdown.

GRAHM GOERING TO THE HOUSE‼️🏠

If you’ve been paying attention, you would have to expect City High to respond. Raph Hamilton ’21 did just that as he found Gable Mitchell ’22 in the end zone to shift the momentum back to the Eastside and set up the fourth-quarter heroics that have been so commonplace for the Trojans as of late.

With Fabian Brown playing both ways all game, Marchaun Hoover ’20 came in at tailback to give the junior a rest in the fourth quarter. Hoover ran as hard as he has all year, bouncing off would-be tacklers for two first downs on this crucial late-game drive.

The offensive line, after a very rough opening quarter, dominated City High up front for much of the game afterwards. Lots can be said about the grit of the Trojan Workhorses and fullback Will Hoeft ’20, who opened up holes for Brown, Morgan and Hoover all night long.

It was during this drive that the on-field tensions, which had escalated throughout the night, reached their boiling point. Some shoving and exchange of words between cross-town adversaries revealed that this was no ordinary high school rivalry game; these players were playing for something much more important than just a shoe and a “W” in the win column: pride.

A few plays later, Morgan silenced the City High defense by dropping a perfect pass into Goering’s hands in the end zone to give West High a 36-32 lead.

Morgan scrambles for a first, then finds Goering for the TROJAN TOUCHDOWN‼️‼️

Fighting for pride and hardware, the teams exchanged blows on the next series before settling around midfield. Defensive coordinator Tyler Meade pulled Henderson aside before a crucial fourth-down stop to give him some last-second advice before the game’s biggest play of the night.

Henderson, a former travel basketball teammate of Hickman’s, read the play perfectly and shot through the gap to give Morgan and the offense the ball back.

Senior linebacker with a HUGE fourth-down stop to give the Trojans possession.

After the West High offense sputtered to a halt, Morgan pinned the Little Hawks at their own five-yard line. Hickman and the Little Hawk offense would not go away, however, and before anyone knew the Little Hawks were at midfield and moving the chains at will. Henderson, who sealed the victory last week with a 98-yard interception return, dug his feet in and made two straight tackles before popping the ball loose from Hickman to return the ball to his offense.

Henderson, a team captain and the only defensive player to start all 20 games from the senior class, was emotional following potentially the final football game of his career.

Grant Henderson ‘20 on the inspiration for potentially his final defensive stand: pic.twitter.com/v7S16eEOdI

The offense punted again before Anu Dokun ’20 cemented the victory with a bobbling interception, one he could not have made a week ago before his cast was removed. Morgan took a knee as the Trojan players rushed to receive The Boot and celebrate with the dedicated fans in the student section.

The season could not have ended on a higher note, both for this community and for this team. Fans of both sides commended the efforts on the field, seeing both teams leave everything on the City High grass for the final football game of their seasons.

The team finished with a 4-5 record and a 20th place ranking in the RPI, the highest rating for any team with a losing record. The Trojans will miss the playoffs this season, but there are plenty of bright spots from the team’s hard-fought battles and three-game winning streak.

The offense returns quarterback Marcus Morgan and three of his top four wide receivers in Goering, Ian McAreavy ’21 and Eric Torres ’21. Fabian Brown is a force to be reckoned with on the ground, as he will be competing all offseason with Tyuss Bell ’21 for the starting running back position. Regardless of the outcome, coach Hartwig will be blessed with two quick and powerful options out of the backfield next season.

The defense will take some hard losses in Henderson and Hoeft, but the trio of defensive back Ian McAreavy, linebacker Kalen Coker-Hayworth ’21 and defensive lineman Mason Applegate ’22 gives Meade plenty to work with and establishes a solid returning player at all three levels of the defense for next season.

Those who stayed to endure the elements will never forget the heroics they saw at Bates Field. Two teams out of the playoffs, but never out of the fight.

“It’s been a tough season, but these seniors, I love them,” Goering said. “Beating City, on this field, it’s the greatest feeling in the world.”