On Wednesday Nov. 6, potential female wrestlers came into room 31 before and after school to learn specific information about the girls wrestling team. 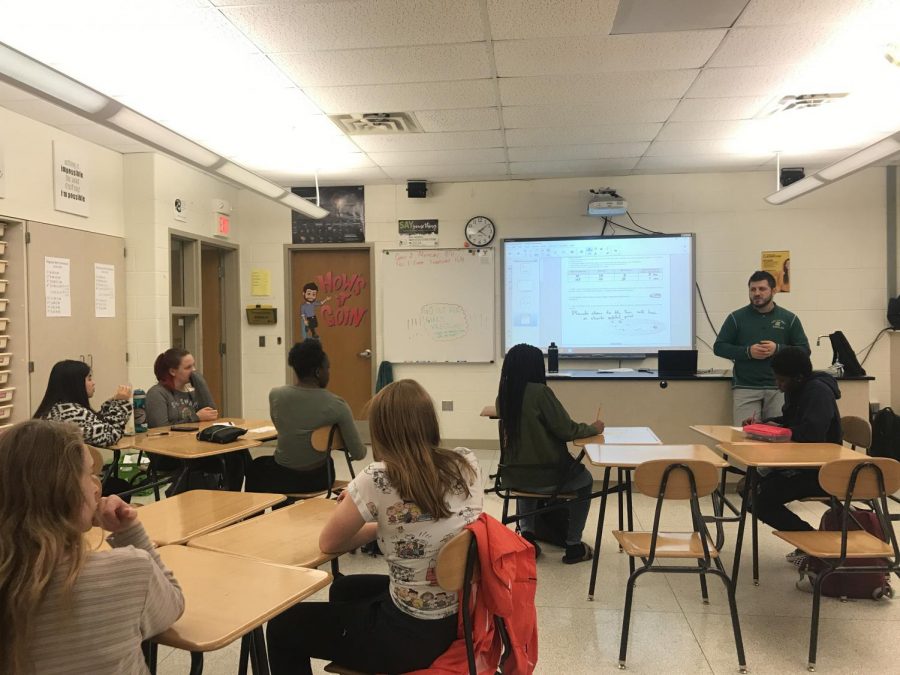 Assistant boys wrestling coach Kody Pudil speaks to a group of about 10 girls after school about uniforms, coaching and the season.

The girls wrestling team is becoming a reality. In informative meetings held before and after school on Nov. 6, assistant wrestling coach Kody Pudil went into detail about his vision for the program.

Practices will begin Dec. 2, the Monday after Thanksgiving break, and the season will end on Jan. 24 with the Girls Annual State Tournament. The team will practice three times a week, once before school from 6:30 a.m. to 8 a.m. and twice after school from 4:15 p.m. to 5:45 p.m. — one of those after school practices likely landing on a Thursday.

The first competition will be on Dec. 16 at City High, so the team will have six practices to get prepared before that event.

Pudil and athletic director Craig Huegel are projecting to have a head coach hired early next week.

“We have a coach that we have identified that would be a good fit for us. We still need to go through the hiring process with him to make sure everything checks out,” Pudil said.

The before school meeting had about a dozen girls present and the after school meeting had roughly 10. Although this will be the first year girls will have their own independent wrestling team, Pudil was impressed by the interest the potential wrestlers showed and speculated that the West program could be one of the largest girls wrestling programs in the state right off the bat.

Pudil fielded questions from the girls, some of which had parents or friends that were worried they would be wrestling girls bigger or more experienced than them. He responded that girls would always be matched up with an opponent their same weight, and said most highschool wrestlers they will compete against are also new to the sport.

“We are going to be a very green, young team, but … I know a lot of you guys are athletes, and I think you guys will pick up on the sport very quick,” Pudil said.

Kaitlyn Hansen ’20, who is considering joining the team but has not committed yet, has been running girls cross country since her sophomore year. With her final season of high school cross country behind her, Hansen sees girls wrestling as an opportunity to stay in shape while trying something that is brand new to West High.

“Through girls wrestling I would hope to just stay active. It’s hard once your sport ends to continue to push yourself and stay as active as you were during season. So being apart of this sport would really help hold me accountable to staying active and getting in even better shape,” Hansen said.

The head coach will be at every practice and Pudil will try to make it to one practice a week, as will boys head wrestling coach, Nate Moore. Pudil stressed in the meeting that the girls will practice as a team and won’t be required to practice with the boys, although they can join the boys for additional workouts if they choose to do so.

“I know that’s been a big hang up for a lot of female wrestlers. They want their own unique thing, they don’t want to have to wrestle boys anymore and really by creating a girls vision that shouldn’t have to happen,” Pudil said.

This promise was especially appealing to Amelia Stevens ’23, who wrestled on a boys team in seventh grade, but didn’t always feel welcome as a girl in a sport dominated by men.

“I was really excited because I did wrestling in seventh grade, but it was really awkward. I didn’t really feel like part of the team and nobody really talked to me. To be fair I didn’t talk to them either,” said Stevens. “In tournaments the boys could be kinda immature, like ‘Ugh why do I have to wrestle a girl?’ and all like, ‘You better beat her.’ So I think I’ll probably be a lot more comfortable and just feel more like I’m part of a team.”

Pudil sounds optimistic about where girls wrestling is headed, and he hopes to see it become a sanctioned sport in the next few years.

This development is another draw that peaked girl’s interests, such as  Rawan Guzouli ’22, who said, “Women are [not always] looked at as wrestlers, so when I knew there a wrestling team in our school I was like, ‘I got to join to show everyone else that its okay to do what you feel like doing.’”