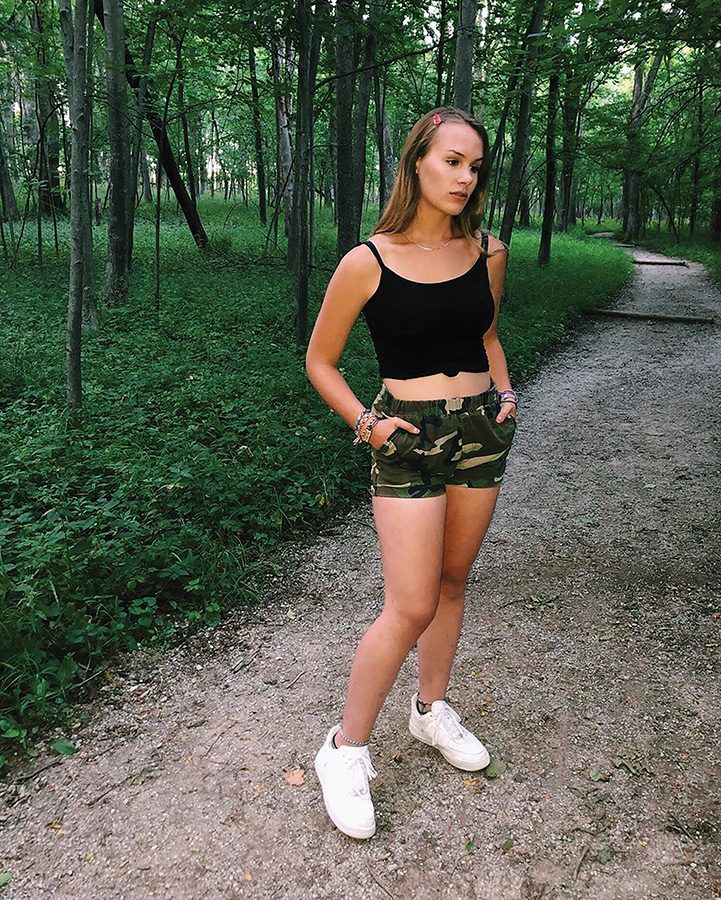 Emma Furlong ’21 poses in the forest.

At the age of 12, many students expect an average middle school routine where they take classes, hang out with friends and do homework. What they don’t expect are perverted comments to be made about their bodies. For Emma Furlong ’21, that situation became an unwelcome reality.
“My family took a vacation to LA. I just bought this romper I was wearing and … this guy comes up to me and was like, ‘Hey, you looking fine,’ and he was super creepy about it,” Furlong said. “I just remember feeling super uncomfortable and not really knowing what was going on.”
When women feel vulnerable and uncertain in situations like these, Furlong believes that it’s easier for them to be taken advantage of, regardless of the type of clothing that they wear.
“I’ve been catcalled when I wear more revealing things, but also I’ve been approached when I’m wearing just a sweatshirt and sweatpants,” Furlong said. “[Catcallers and harassers like] dominance, to see that they’re in control. I’m still always nervous whenever I walk past a group of guys — I’m always scared they’re going to say something. It happens when I’m walking downtown. Especially if I’m by myself, I feel pretty nervous about it.”
Furlong also believes that sexual harassment is so prevalent because there are misguided conceptions about the emotions a person on the receiving end should feel.

“I think there’s an expectation that [girls] should just take it because that’s just what guys do. I’ve also heard people say, ‘Why don’t you take it as a compliment?’ That really makes me upset because that’s not a compliment and we don’t want to be objectified,” Furlong said. “We’re just living our lives walking down the street.”
The atmosphere surrounding the topic leads victims to become more self-conscious. One study done by the University of Melbourne on 81 women revealed that being personally targeted or witnessing others being objectified was associated with a “substantial increase” in “self-objectification.” The National Women’s Law Center also found that 1 in 3 students who experienced harassment reported not wanting to go to school anymore, leading to poorer academic performance and attendance.
“When it happens, you kind of feel ashamed. Maybe it’s because you were wearing something more revealing and you think people will say that ‘She was asking for it, she wanted it.’ You think that it was your fault and it’s a really uncomfortable thing to talk about,” Furlong said.
According to Furlong, there’s power in shared vulnerability.
“This issue really relates to the #MeToo movement because it’s important to speak up and say, ‘This is what happened to me and it’s not okay,” Furlong said.