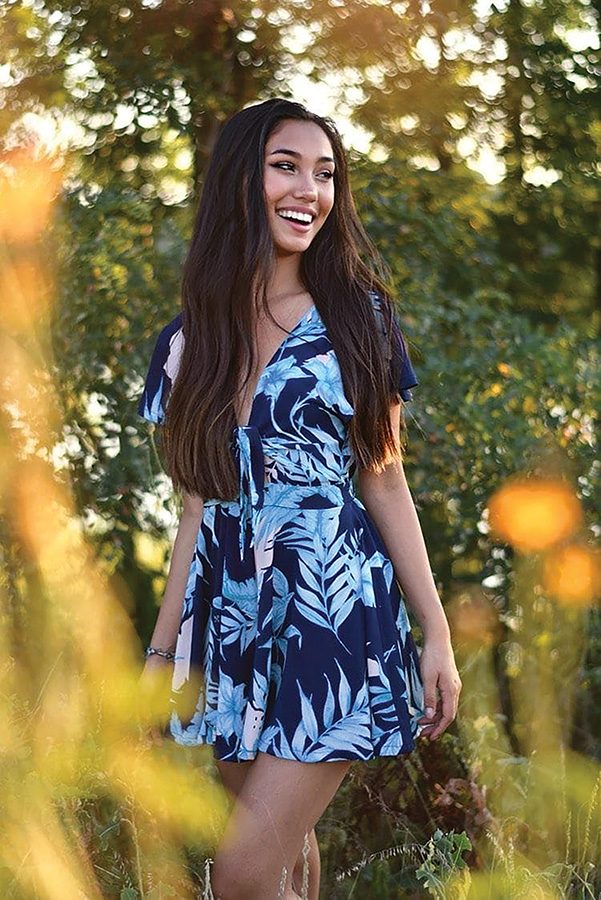 Mallika Huynh ’21 smiles in the sun.

All too often, many people are exposed to sexual harassment at a very young age, before they even have a grasp on what the concept even means. Mallika Huynh ’21 was one of those who experienced this, recalling the time when, at 11-years-old, she first created an Instagram account without realizing that accounts could be set on private.
“A bunch of older men slid into my DM’s and would be like, ‘What’s up babe? You’re pretty sweet looking,’ like weird perverted pedophile comments, and I didn’t know how to deal with it,” Huynh said. “It was definitely uncomfortable because when you’re 11-years-old, you don’t want a bunch of old men asking you to come meet them in an alley.”
Huynh also received similar messages from people around her age that she found difficult to deal with.
“One was like ‘Hi, you’re cute. How old are you?’ And I felt like I was polite enough when I was like, ‘I’m probably too young for you.’ Suddenly, then he says ‘You ugly ass bitch,’” Huynh said.
As Huynh grew older, she began to experience these situations more frequently and increasingly in-person.
“A friend and I were walking downtown in the library and we were 12 to 13. This homeless man walks up to us, lifts up his shirt, and was like, ‘Ladies, you should see how I am in the bedroom. You should come with me.’ The library staff took it really seriously so they called the cops and he got arrested,” Huynh said. “Since then, there’s been a lot of stereotypical catcalling, like ‘Hey mami, what’s up? Hey sexy, how you doing?’”
As Huynh entered her high school years, the sexual harassment and catcalling she experienced became more physical.
“At a football game some random guy who’s friends with one of my friends comes up to me and starts playing with my hair and touching my body and grabbing my ass and was like, ‘You fine, you know that?’ I don’t really understand how they think that it makes someone feel nice. I felt uncomfortable. [They were] in my space,” Huynh said.
The attitude that men should do what they want and that women are at the fault of the issue is felt differently around the world.
Huynh experienced this firsthand in India when she was 14, where a family acquantince touched her inappropriately without her consent. After finding out about the altercation, her mother was able to get the man fired from his job.
“I didn’t really know what was happening at the time. The man didn’t even seem to think that what he did was wrong,” Huynh said. “There’s a view set towards women in India — it’s a very cultural thing and that’s not excusable when women are oppressed and put under these gender roles that are weighing them down. When you see women being gang raped and their rapists not even brought to justice, there’s a huge issue there and it’s not really spoken or known about.”
According to the Thomas Reuters Foundation’s survey of 550 experts on women’s issues, India was found to be the most dangerous nation for sexual violence against women. In another report by the Livemint, about 99% of cases of sexual violence in India go unreported, due to cultural attitudes and a conviction rate as low as 18.9%.
Part of the reason why Huynh believes the issue isn’t spoken about more is because when women do speak up, their voices often become lost or silenced. Huynh felt her own voice was drowned when she spoke up to a very close figure in her life.
“When I told someone really close to me, a huge adult figure in my life, they first asked me what I was wearing and what I was doing. He was like, ‘Maybe he didn’t know better, maybe you don’t understand what he was doing.’ So you’re willing to defend a guy you don’t know over someone you’ve known your entire life? That’s not even just for me, it’s common everywhere,” Huynh said. “When there is a surge of women coming forward, everyone’s like ‘Oh, they just want to lie,’ but no — it’s empowering when other women come forward because you feel like you have the ability to do that as well.”

Reflecting on her experiences from her childhood to the present, Huynh realizes the inevitable reality that women still have to face on a day-to-day basis.
“This is a real thing in the world. Unfortunately, we have to be prepared. In reality, women still have to fear for their safety walking down the street. A lot of times when men do these things, women don’t necessarily know how to react,” Huynh said. “People are always like, ‘Oh, it’s fine now. It was so much worse back then.’ Just because we made progress doesn’t mean there’s no more to be made.”
Through sharing her own personal voice and letting it be heard clearly, she’s hoping to see more awareness about sexual harassment in the future.
“If you’re uncomfortable, still talk about it. Talking about it recognizes it as an issue and that’s what everyone needs to do because there’s so much denial,” Huynh said. “This is an issue and once we give it that recognition, then we can take the steps to move forward. And hopefully, provide a space where women feel safer and be more able to speak out.”