The important work done by custodians sometimes goes unnoticed by students, but the student's hijinks are remembered by the custodial staff. Check out the most memorable messes they had to clean below. 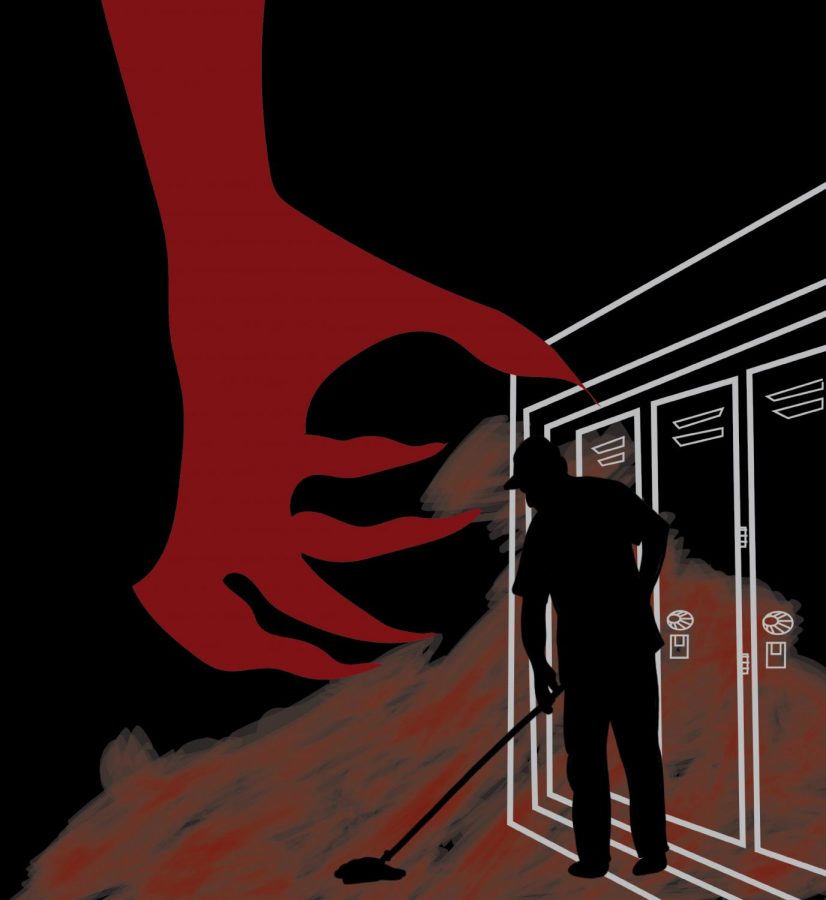 West's custodians have faced a multitude of catastrophes ranging from loose animals to flooded locker rooms.

From mopping up spills to fixing maintenance problems, it’s no secret that custodians play a pivotal role in maintaining a clean environment at West. As crucial as their job is, however, these custodians sometimes have to face messes on par with the grossest of horror movies. Here’s just a few of the numerous horror stories that custodians Donnie Binegal, Daniel Carlos and MJ plank have to share from right here at West.

Of all the things to be found running through pipes, a snake is probably the least expected. In a desperate attempt at freedom from the science department, the snake found refuge in the pipes at West.

“The snake got loose from the science labs and was in the tunnels around the school. That’s where we found it, in the tunnels,” Binegal said.

They’re cute. They’re furry. They’re detrimental to I.T. lines. Nicknamed by teachers at the time as “Squirrelgate”, the discovery of a family of squirrels living in the ceilings at West was a particularly memorable issue for the custodians.

“There were squirrels that got up in the ceiling and tore out the I.T. lines and stuff like that, caused a big problem,” Plank said.

It’s no surprise that the custodians have experience dealing with a wide range of problems involving the bathroom. For MJ Plank, however, one of these stories happened in an unusual place: the auditorium. “I had one kid go down to the auditorium and poop and pee in a milk container and just leave it there,” Plank said.

Cost of the Job

It’s a dangerous job, and no one understands this better than Plank. When he was removing an old table from a conference room, the legs suddenly snapped shut quicker than planned, taking a piece of Plank’s middle finger in the process: “I didn’t realize at first, I thought I had just smushed it,” Plank said. “And then Dan had to bring out the extra piece [to the hospital], but it was too mangled to attach.”

To flush or not to flush

Apples. Oranges. Paper towels. A chunk of braided hair. The one thing these objects all have in common? They’ve all been the cause of major headaches for the custodians in the PE locker rooms. At one point, the build-up from objects being flushed down toilets that don’t belong there was so bad that the pipes were backed up 175 feet out from the school.

“That’s why we don’t flush things that aren’t supposed to be flushed,” Plank said.

If you’ve ever visited the old weight room and noticed a tiny face staring down at you from the ceiling, you’re not alone. A senior prank in 2013 left stickers of Kanye West’s face scattered around the school. While the custodians were able to get most of them, an elusive few have stuck around in mysterious places.

“I’ll never like that man’s music again, or anything with him because of those damn stickers that got put up everywhere,” Plank said. “Some of them were in these ridiculous places too, we were just like ‘nope those are going to stay there.’”