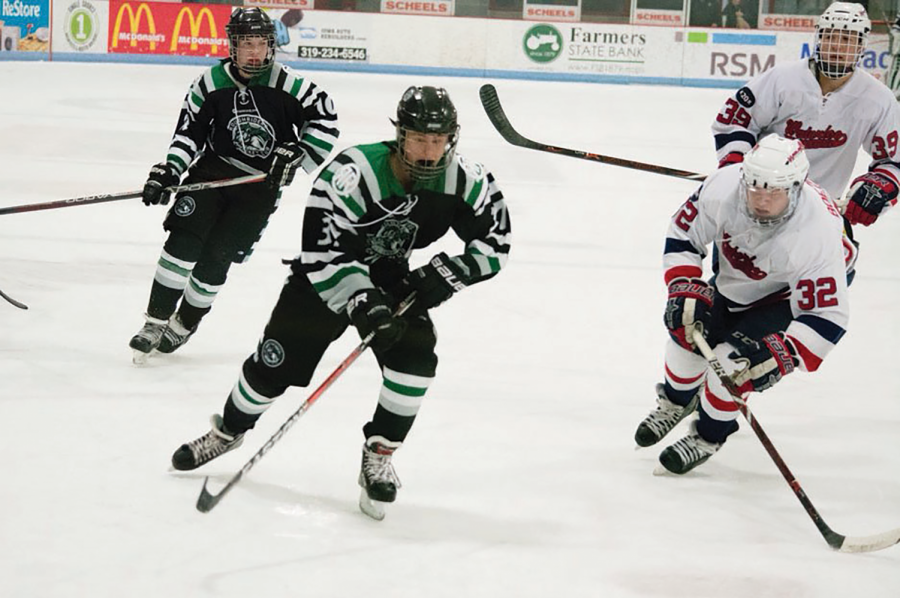 Chris Pigge ’21 plays with the Cedar Rapids RoughRiders, which participates in a total of 33 games each season.

The players zoom by on their skates, managing to maintain their balance while also having incredibly accurate aim when passing and shooting the puck. Hockey is one of the most action-packed sports that requires many skills to master.

Chris Pigge ’21 first got into hockey after his father played it as a child and encouraged him to try it out. He enjoys the exhilarating environment that it provides.

“[My favorite part is] the energy that comes with it because when you’re playing a game, it’s super fast-paced,” Pigge said. “You really have to keep your head on a swivel and that’s exciting.”

You really have to keep your head on a swivel and that’s exciting.”

Pigge currently plays for the Cedar Rapids Roughriders Club. It includes players from many other schools, such as City High, Liberty High and Solon. Despite rivalries between the schools in other sports, the players set these differences aside for the better of the team.

“Like any team, people have their differences, but at the end of the day we always look over them,” Pigge said.

Through hockey, he has learned that hard work is the most significant determinant for success.

“If you’re slacking, you’re going to get skated, which means … you skate back and forth until the coach tells you to stop. So it’s very hard work over talent,” Pigge said. “It doesn’t really matter how good you are, it matters how hard you’re working.”