The Trojan Bolts boys swim team claimed the state title in Iowa City on Feb. 15 with 262.5 points and one individual state title from James Pinter ’20 in the 100 backstroke. 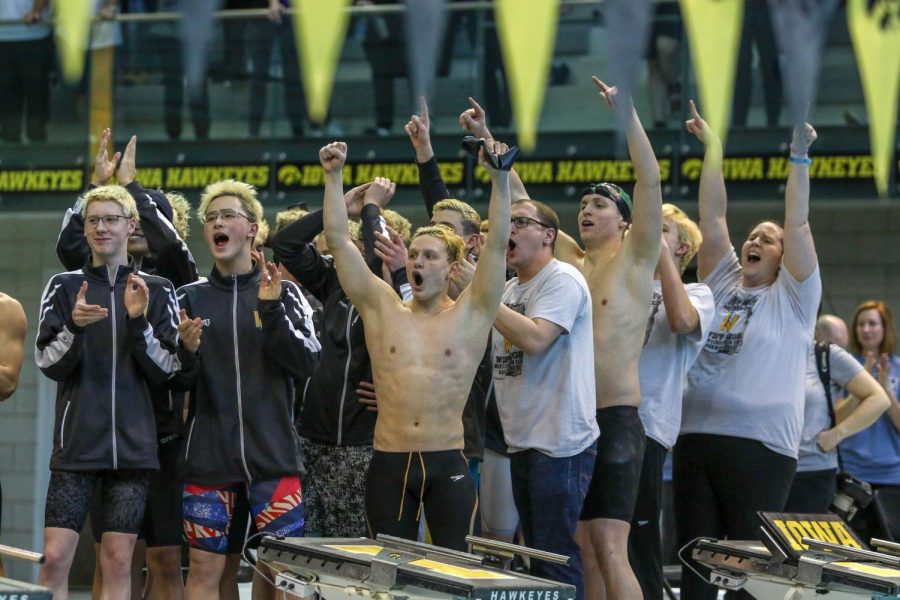 Izaak Hajek '20, along with his teammates and coaches, celebrate as Jordan Christensen '22 recieves his medal on Feb. 15.

Step two has officially been checked off.

After having another undefeated regular season, the team kept their winning streak alive by claiming the state champion trophy with 262.5 points, the third team title for head coach Byron Butler, who was an assistant coach back in the 2014 and 2015 season.

The Trojan Bolts boys swim team had their state championship meet at the Campus Recreation and Wellness Center in Iowa City on Feb. 15. The team took home the state title after a 13th place finish at last year’s state meet and had one individual state title from James Pinter ’20 in the 100 backstroke.

The state title was shared by all members of the Trojan Bolts, something Butler has emphasized as a key component of this year’s team since the first day of practice.

“I think the team showed depth [and] I think they showed that they were willing to buy into a goal that was not about any individual, it was about the team. When those guys are swimming for their team they accomplish stuff that they would have never have on their own,” said head coach Byron Butler. “I am happy that the seniors got to go on top and have this experience because there’s nothing like it, there’s nothing like winning a championship with your best friends.”

The 200 medley relay team of Pinter, Jordan Christensen ’22, Izaak Hajek ’20 and Michael Kimball ’20 placed second after a close race against cross-town rival City High to start the meet. The team swam a time of 1:31.86 which met the automatic All-American standard time.

Diggory Dillingham ’23 may have only been a freshman in his first state meet, but one never would have known it by his performances today.

Dillingham impressed the crowd by finishing second in the 50 freestyle (20.67) and third in the 100 freestyle (45.85) in his first high school state meet appearance. For Dillingham, contributing to the team was a great accomplishment.

“I feel like [I] could have gotten faster, but I am happy with it since I helped the team,” Dillingham said. “It feels pretty good, I mean we earned it, the whole year we haven’t lost once.”

The relay team of Kirk Brotherton ’22, Luke Nichols ’21, Michael Kimball ’20 and Dillingham showed some starpower in the 200 freestyle relay. Brotherton stayed with the crowd while Nichols kept the lead in the first two legs. The team finished third with an outstanding time of 1:24, an automatic All-American standard time.

Pinter swam a 50.01 in the 100 backstroke to become the only individual state champion for the team.

The sight of the state title was looking good early in the meet, but was questionable following the 100 backstroke in which Ankeny placed fourth and fifth in the event. West was tied with Ankeny at 205 points which lead to high tensions for both teams for the last two events.

Gavin Keeney ’22 tied for 16th overall in the 100 breaststroke, scoring half a point to put the team in the lead with 205.5 after heat one of the event.

Christensen was unable to swim at last year’s state swim meet due to an injury, but came back strong by placing second in the 100 breaststroke with a time of 56.40.

The experience for Christensen was one to remember.

“After that injury, I felt so bad. I knew we were going to be better next year and with the addition of Diggory coming in as a freshman and Damon transferring over to Liberty from CCA we just got so much depth,” Christensen said. “After gaining those people, we just got so many other swims through those people and it makes this moment feel even better.”

Tensions were high during the last race of the meet while the Trojan Bolts were hanging ono the overall lead for team scores by 23.5 points.  The 400 freestyle relay of Dillingham, Luke Nichols ’21, Hajek and Pinter started off battling for fourth place.

As the race went on to the third and final leg, Hajek and Pinter swam to close the gap, with Pinter the second to touch the wall in a time of 3:05.45, securing the team’s state championship win.

Despite losing the seniors, the next season will be one to look forward to.

“We graduate a lot of guys, but we got a couple of good guys coming up,” Butler said. “[They have] the same mentality these guys have, this experience now, and I bet they probably want to do it again sometime.”