More than a head covering

The hijab is a staple of the daily outfits of many Muslim girls and women. While most non-Muslims have seen a hijab, not all know the deeper meaning it can hold to these women. 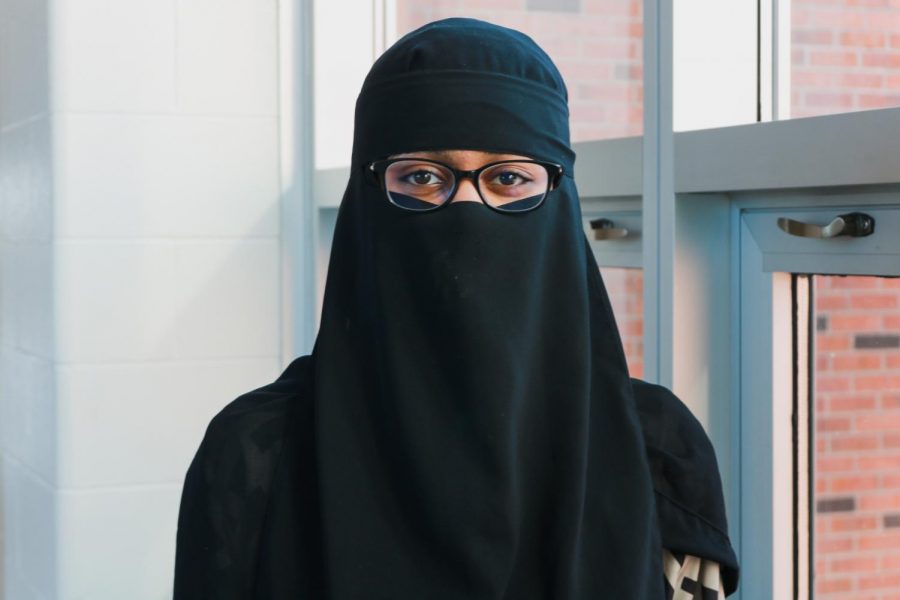 Hayate Mustefa '23 wears a niqab, a garment that incorporates a face covering in addition to a headscarf.

For some women, leaving the house without having their favorite ring, watch or scrunchie is an abnormality. For many, there is a specific article of clothing that they would not feel comfortable going in public without. For some Muslim girls and women, that item of clothing is their hijab.

Although some outside of the Islamic faith may not understand why it is worn, many who choose to use the hijab embrace its religious meaning. While the hijab may begin for some girls as a symbol of modesty and faith, it has the capacity to grow into much more.

Muslim women and girls choose to wear the hijab for different reasons. Hayate Mustefa ‘23 started wearing her hijab in fourth grade because all the women she admired wore one.

“It was mainly due to the fact that the people that I looked up to, they all wore the hijab,” said Mustefa.

Amina Ahmed ‘20 wears the hijab to stay modest and to show off her culture.

Other Muslim women and girls wear the hijab to fit in or per parental request. Sumayya Muhammad ‘21 originally started wearing it in the fifth grade after moving to a new town with a larger Muslim population.

Muhammad originally did not want to wear the hijab because she thought it would hinder her ability to choose outfits and that some would not like it. After some time, she grew more accustomed to it as a part of her outfit and who she was.

“I’ve accepted it more because of the religious background. The value of covering yourself [and] modesty,” said Muhammad.

Over time, as girls more frequently wear their hijabs as they get older, the meaning it has for them changes. Mustefa originally wore it because of the religious connotations, but now sees it as a manner of pride and purpose.

“Whenever I go out in public, I wear the flag of Islam on me. I think that it’s something that’s beautiful,” said Mustefa.

When Ahmed first wore her hijab to school, she received a lot of attention. “Well, the first time when I went to school everyone was so shocked because I was the only one who wore one in the whole school,” she said. Eventually, this response subsided, and she now views her head covering as a proud expression of her culture.

For all three girls, the hijab has grown into a regular article of clothing that they would not go out without.

“I didn’t want to wear it for a day and then take it off the next day because that didn’t have any value like it defeats the purpose,” said Muhammad.

Over time, Mustefa has grown so accustomed to wearing the hijab and niqab that she sees it as a part of who she is and its meaning to her as clothing has changed over the years.

“At first my definition of the hijab was much more shallow. It was for religious purposes. Now I say that it’s part of me. It defines in a sense who I am,” said Mustefa.

As something that many Muslim females wear on a daily basis, it is important that the hijab and niqab are versatile enough to cater to different outfits and occasions.

“Nothing is really different from when I didn’t wear it, but I feel like its become like a part of my outfits and my styles and I make it adapt towards my fashion sense so I’ve been enjoying it now,” said Muhammad.

Mustefa believes that the hijab is able to mold into what the individual wants the outfit to be.

“Being able to change the style according to the clothes is definitely something that allows people to feel confident in the hijab,” said Mustefa.

While there are quite a few variations on material, color, and texture of the hijab, Muhammad notes that wearing it limits some outfit choices.

“Not only when I put it on did I have to wear it, I also had to change the style of clothing that I wore and I had to wear longer sleeves and I couldn’t wear my shorts anymore [or] my tank tops or anything like that,” said Muhammad.

Along with pairing the hijab to an outfit and to events, those who wear the hijab cannot go to just any mall to find an abundance of hijab variations. Ahmed and Mustefa go outside of Iowa to buy their hijabs.

“Every summer we go to Sudan. When we are there, we buy most of our scarves,” said Ahmed.

Mustefa either goes online to buy hijabs or buys them on family trips to Minnesota because there are not as many opportunities to buy them in Iowa.