The baseball team won both games of the June 25 doubleheader with the same score of 11-1 behind 10 strikeouts from Marcus Morgan ’21 and a double play. 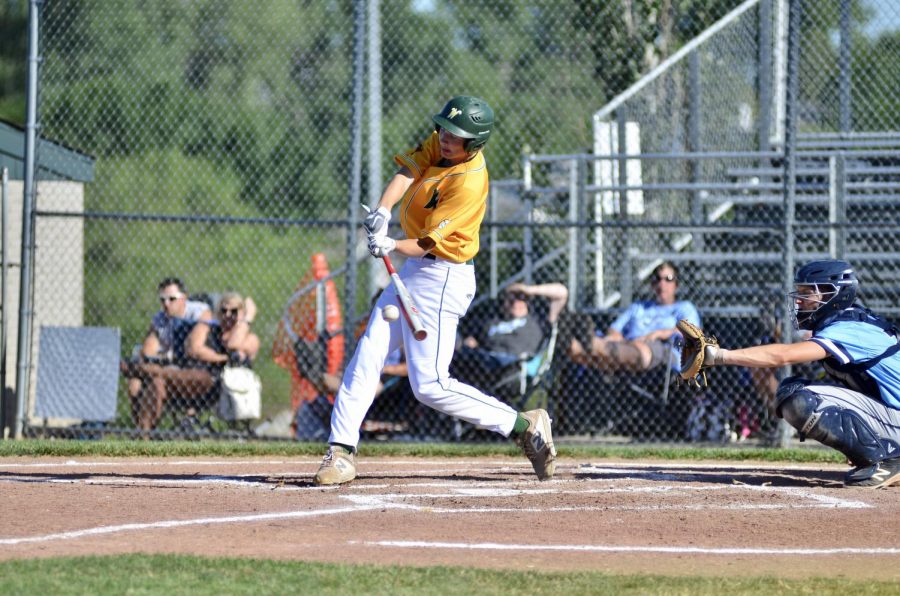 Ben Vander Leest '20 makes contact with a ball on June 25.

Starter pitcher Marcus Morgan ’21 began the first game strong by striking out all three batters in the top of the first inning.

West got on the board in the bottom of the second inning when Will Hoeft ’20 hit a double for Ian McAreavy ’21 to score.

Sophomore John Syata double scored Brett Cherry ’20, bringing the score up to 2-0 at the end of the second inning. McAreavy’s single scored Morgan to make the score 3-0.

Hoeft kept the offensive trend alive by hitting a triple to left field, having Ben Vander Leest ’20 and McAreavy to score, along with a single from Mason Dains ’20 for a run for Hoeft.

The only run of the game for the J-Hawks resulted from an error at first, sending a runner to home and another to second base in the fourth inning. However, Morgan remained calm, striking out the batter and pickoff the runner at second base.

A pass ball that sent Hoeft home ended game one of the doubleheader in the sixth inning with a final score of 11-1.

Luke Miller ’21, starter pitcher for the second game had four strikeouts and allowed one run in four innings. Dains hit a double to send Hoeft and Vander Leest home. The Trojans were in the lead 2-0 after the first inning.

Another four runs were added in the second inning, Vander Leest hit a triple for Morgan and Brett Cherry ’20 to score. McAreavy’s sacrifice hit made the score 5-1 at the end of the inning.

After a scoreless third inning, the Trojans showed some offensive power in the fourth. Two sacrifice flies from McAreavy and Hoeft added two more runs for the team in the inning, making the score 7-1.

Drew Klein ’20 relieved Miller in the fifth inning and prevented the J-Hawks from scoring any additional runs throughout the game, including a double play from the infield, while the Trojans scored two runs in the inning.

The Trojans secured their first win at home when Klein hit a double with bases loaded, concluding the game in six innings with a score of 11-1.

Unlike the game at Liberty on June 23, Head Coach Charlie Stumpff believes the team was successful offensively during the doubleheader.

Coach Stumpff stresses focus and the repetition of plays during practice to better prepare the players for the games.

“In a game, it’s nothing more than practice. It’s not unlike a good students … I’ve got good students on the team [and] they prepare, they feel pretty confident when they go into a test, [but] I’ve done all of that, so that’s all games are [like] tests we’ve prepared and let’s go ahead and do your thing,” Coach Stumpff said. “Sometimes you get emotional [and] that’s the human element you can’t take out of any games, so that’s what we’re gonna try to do.”

The baseball team will be back in action in another doubleheader at Dubuque Hempstead on June 29.