West keeps the boot for the fourth consecutive year

The Trojan football team defeated City High 56-20 in the Battle for the Boot behind senior Grahm Goering's opening kickoff return for a 96-yard touchdown on Sep. 4. 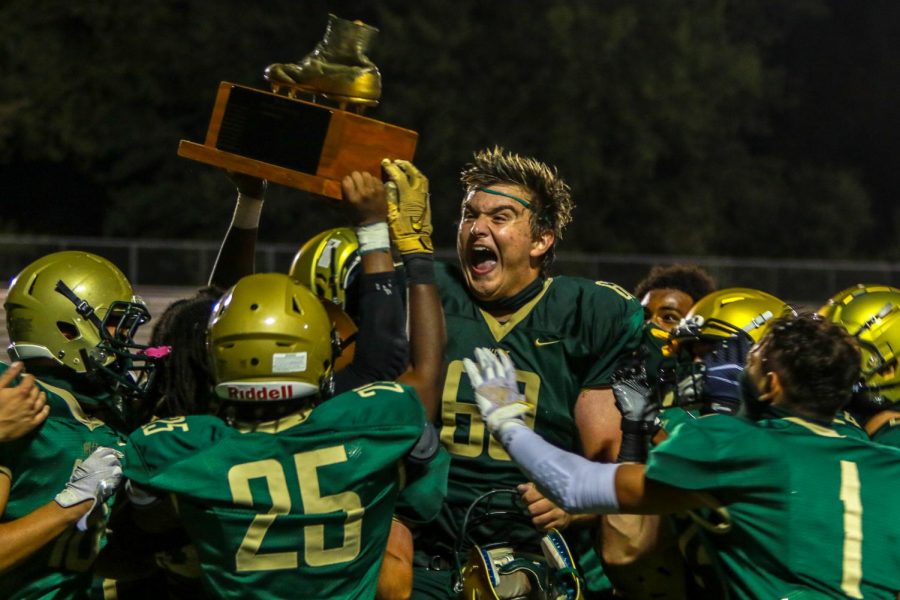 Liam Becher '22 and his teammates celebrate after the Battle for the Boot on Sept. 4.

That’s the only word that could even start to describe the West High offense in the 52nd Annual Battle for the Boot, where the Trojans handed their cross-town rival City High their first loss of the season with a final score of 56-20 on Sept. 4.

It all started when Grahm Goering ’21 took the opening kickoff to the house while stiff-arming the last man to beat for a 96-yard touchdown only 16 seconds into the historic night for the Trojans.

A snap over City High’s quarterback senior Raph Hamilton’s head set up the West High offense for their first possession of the night. Marcus Morgan ’21 found Damarion Williams ’21 on a nice hitch route where he found a block and ran 56 yards for the Trojans’ second touchdown of the night, putting them up 14-0 with 7:33 in the first quarter.

There was no turning back from then on for Garrett Hartwig’s now 2-0 football team as Andrew Durham’s offense drove the ball right down the field to set up Morgan for a 10-yard run right up the middle to put West up 21-7 with 8:11 left in the first half.

.@Marcus_Morgan20 scores the third touchdown of the night for the Trojans.

Tyler Meade’s defense proved themselves for the second week in a row as they shut down another run-heavy offense to put together another Little Hawk three and out with seven minutes left in the half.

Morgan made something out of nothing as he scrambled to his left and found Williams 25 yards downfield to set up the Trojans’ third red-zone appearance of the night. With six minutes left in the first half Morgan found Goering in the back of the endzone on a beautiful fade route for a 22-yard touchdown pass to make it 28-7 West.

After another quick three and out from the Little Hawk offense, the Trojan offense put together another drive that ended in six when Morgan found Goering for a 6-yard touchdown with 30 seconds left in the half to go up 35-7.

The second half didn’t slow down the Trojans at all as yet another City High drive led to a three and out. This time it was newcomer Trey King ’21 who led the West High offense down the field as he punched in a 3-yard touchdown to put West up 42-7 with 7:32 left in the third quarter.

After a two-yard touchdown by City High running back Darren Richardson ’22 at the start of the fourth quarter, Morgan capitalized on an outstanding night with just one more touchdown when he found Goering in the back of the endzone for a 33-yard touchdown. West went up 56-13 with 8:57 left in the fourth.

Goering scores his fourth touchdown against the Little Hawks.

Morgan finished with four passing and one rushing touchdown to go along with his leading wide receiver Goering’s four touchdowns on the night.

For the first time in school history, The Boot will stay on the West Side of Iowa City for the fourth consecutive year as the Trojans ended the night with a 56-20 victory over the Little Hawks.