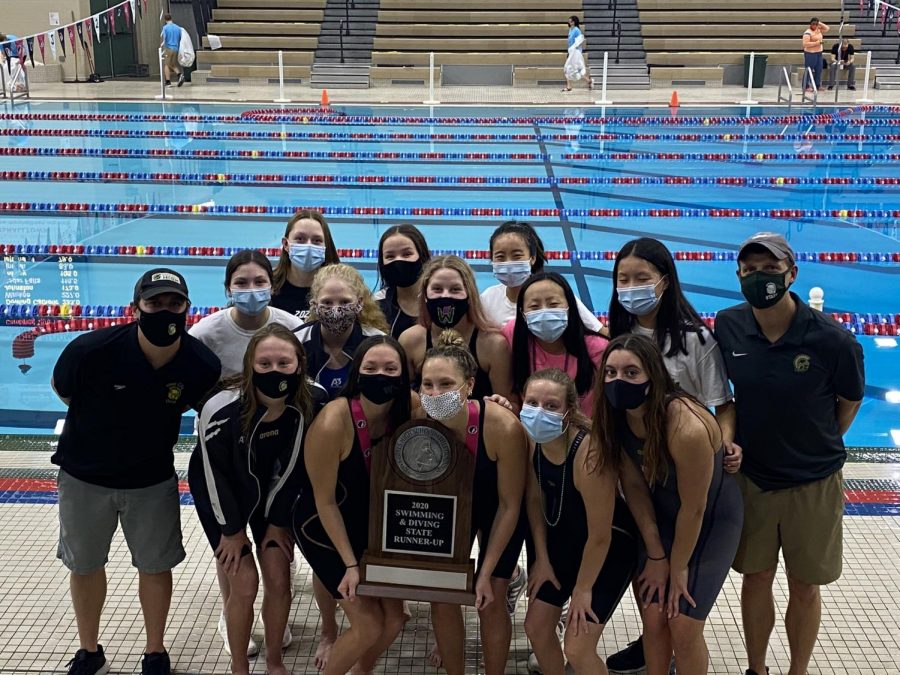 The girls swim team placed second at the state meet in Marshalltown with a total of 277.5 points Nov. 14.

After the West and Liberty girls swim team capped off another undefeated regular season and an overpowering regional meet win, Byron Butler’s Trojan Bolts had some bigger ideas. In hopes of making history for the girls swim program, the team made the trip to Marshalltown Nov. 14 to put an exclamation point on their already accomplished season.

It was a big moment for Aurora Roghair ’21 when she defended her 200 freestyle state title with a time of 1:47.30 and her fellow teammates Jade Roghair ’23 and Kolby Reese ’24 each placed third and seventh respectively.

“I am super excited with how it all turned out. I just came in trying to swim my best times and obviously worked out well,” Martin said. “I knew I had to stay calm and just had to swim the race and I know I was super capable of going my best times. Byron prepared me very well for this meet so I just had to get in and had to swim it.”

“I am really happy with [my time], it means a lot to me,” Aurora said.

The 200 freestyle relay of Hochstetler, Jade, Aurora and Martin froze the clock at 1:34.34 to secure their state title. The relay championship was the first since 1983 for the program.

After coming in as the new state meet record holder in prelims last night, Martin once again shined in the pool after swimming a 54.14 to etch her name in the record book. Martin placed on top of the podium for the second time of the meet. Wilkins made her state meet debut in the 100 back and finished fifth in the B final.

“It was really crazy, I didn’t really know what to expect … [because] COVID happened and I actually managed to drop some time from my time last week,” Wilkins said. “It was really really nerve wrecking but I had so much fun today.”

And just like that, another record falls! Aurora Roghair of @SwimICWest swims a 4:45.78 in the 500 Freestyle.

It all came down to the last race of the meet when the 400 freestyle relay of Jade, Aurora, Martin and Taeger dominated the pool by setting a new state meet record with a time of 3:23.73. Martin was recognized as the state athlete of the year and the girls swim team placed second with a total of 277.5 points, the highest team state meet finish in West High’s girls swimming history.

For Aurora, her last race was a memorable moment.

“It was really bittersweet, I love these girls and it’s going to be really sad that it was my last [meet] but we couldn’t have finished it off any better,” Aurora said.