Following decades of state championships for girls sports teams under the Women of Troy nickname, all West High sports teams will now share the same name regardless of gender: the Trojans. 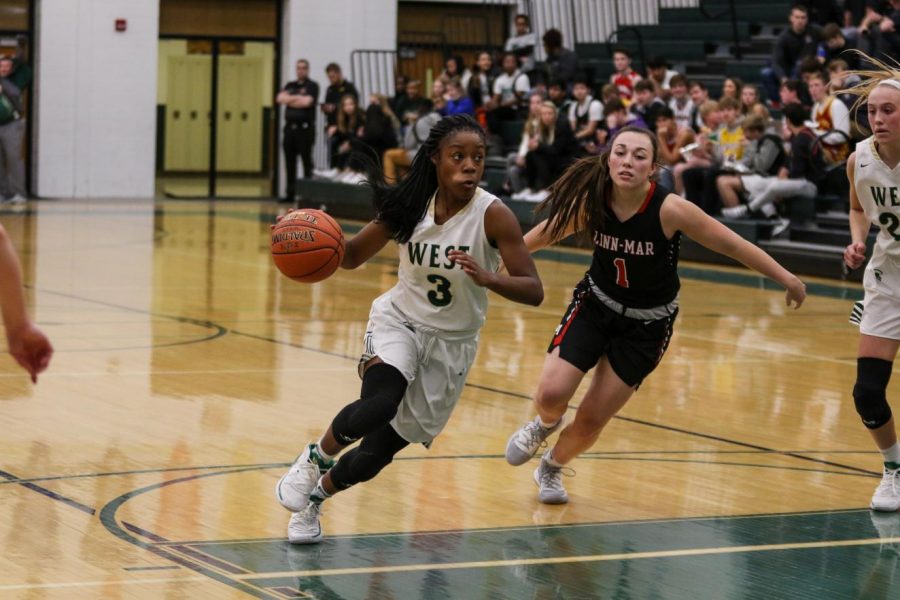 The Iowa City West High "Women of Troy" became the "Trojans" this fall.

Exhilarating wins and devastating losses are engraved in the culture of sports, and West High is no stranger to these experiences. For years, Trojan athletes have dominated in numerous spheres of athletics with girls sports teams competing under the nickname Women of Troy and the boys as Trojans. Going forward, they will all compete under a common name. In an email from Athletic Director Craig Huegel Oct. 17, the media was informed that West High would be retiring the Women of Troy nickname. All teams will now be referred to as the Iowa City West Trojans.

Since the founding of West in 1968, sports teams have been referred to as the Trojans, with the Women of Troy nickname coming along later. In recent meetings with the coaching staff, the name change had been brought up. The first reason was to avoid gender stereotypes regardless of the sport.

Phoebe Burt ’21 sees the name switch as a symbol of change.

“The name change to me is just a sign that times are moving forward,” Burt said. “I’m excited to see the new name and my fellow female athletes wearing it with pride and kicking butt in their sports seasons.

Burt participates in football and track and field. Prior to the change, she played under the name Trojans during the fall sports season and Women of Troy throughout the spring sports season. Although Burt recognizes the reason for the change, she wishes athletes were able to have a voice in the decision.

“I have always liked the Women of Troy name, so I’m sad to see it go away, but I understand why they are doing it,” Burt said. “I do wish the school would have at least sent out a poll or something about the name change.”

Although athletes will no longer compete under the Women of Troy nickname, Burt believes its emotional aspect won’t fade away.

“The Women of Troy nickname always brings me back to track season and the memories from past seasons,” Burt said. “That always makes me smile.”

While sophomore Hana Abou Alaiwa doesn’t participate in athletics at West, she is an avid fan of the girls volleyball team. For Abou Alaiwa, the Women of Troy nickname has a special meaning.

“It seemed very powerful and courageous, and it fit the girls who played sports very well,” Abou Alaiwa said. “The name change lost that special meaning it had.”

Emma Ingersoll-Weng ’22 sees the Women of Troy nickname as a symbol of her basketball team’s persistent mentality.

“To me, the name means keep fighting and don’t give up no matter what people say,” Ingersoll-Weng said. “It’s not over until the [game] clock hits zero.”

However, Ingersoll-Weng is excited for the upcoming season, regardless of what name she’s playing under.

“I think most of my teammates and I didn’t know about the name change; we were mainly just excited about having a season this year,” she said. “We are all fine with the name change; I always thought it was a bit odd calling us the Women of Troy instead of just the Trojans like the boys team.”

For Kathy Bresnahan, a former teacher and the Women of Troy volleyball coach from 1987 to 1999 and again from 2005 to 2013, the Women of Troy nickname holds many special memories. One sentimental coaching memory came from the 2011 volleyball season, when the team was still mourning the loss of Caroline Found, their star setter.

“That was a life-changing journey for our team. I still feel a tremendous sense of loss and sadness over Caroline’s death,” Bresnahan said. “I had admiration for [the team’s] strength and determination.”

The team’s perseverance throughout the emotional 2011 season made Bresnahan proud to coach under the Women of Troy nickname.

“I always felt pride to be associated with West High. It is a school that represents inclusion, greatness and tremendous athletic, academic and musical programs,” she said. “[It is] truly one of the finest schools in the nation.”

Amidst efforts to become more inclusive, the shift from the Women of Troy nickname to the Trojans has been in the works for several years.

“This has been something that has been in the planning stages since I’ve arrived here,” Huegel said. “We wanted to make sure that media outlets and our state organizations referred to us as the Trojans.”

With the name change being a topic of discussion in coaching staff meetings, there wasn’t a specific timeline to the change.

“It’s something we’ve mentioned in meetings before, but I didn’t necessarily give them a direct timeline of what that was going to happen. I felt like with the start of a new athletic and academic school year, this was probably the time to do it,” Huegel said. “We decided in an external sense that we would retire the Women of Troy [nickname]. We’re the Trojans, whether that’s our girls basketball team [or the] football team.”

Although the nickname shift has surprised a few, Huegel notes the change has been well-received by many.

“I think there was maybe some shock amongst some members of our coaching staff. I think with everything else going on this year, when you put this into the grand scheme of this, it’s not earth-shattering,” Huegel said. “I just want our athletes to be known as Trojans for the great things that they do.”

Since the Women of Troy nickname represents fond memories for some athletes, Huegel hopes that former and current Trojans focus more on their experiences rather than the name they played under.

“I’ve had, in just my five years here, some really amazing opportunities. But those are things that I hope they remember, maybe not so much that we were called the Women of Troy,” Huegel said. “I think anyone who gets involved with athletics gets involved for the memories, the values and the success that they get to experience.”