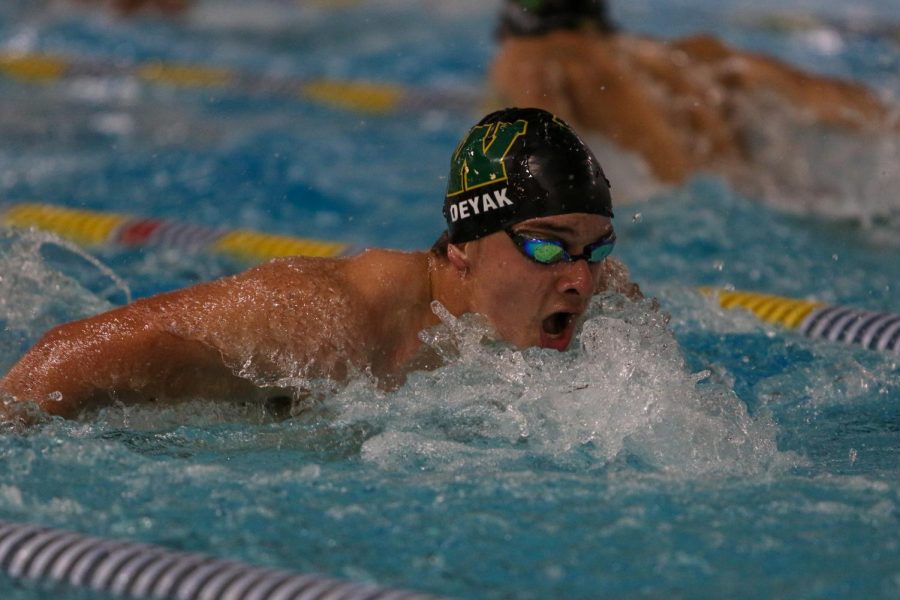 Nathan Deyak '21 swims in the 100 Butterfly against Waterloo on Dec. 15 at the Coralville Rec Center.

No practice, no problem.

When the school district decided to move to all online learning two weeks ago, the defending state champions were suddenly taken out of the pool until only a day ago when the team reunited for one of their first practices of the year.

After losing a large group of seniors that were vital to lighting up the scoreboard last year, tonight’s dual meet let the people know the Trojan Bolts aren’t rebuilding, but are reloading. The boys swim team dominated Waterloo 137-32 in their first dual meet of the season at the Coralville Rec Center Dec. 15.

Right out of the gate, the 200 medley relay team of Holden Carter ’24, Jordan Christensen ’22, Luke Nichols ’21 and Kirk Brotherton ’22 took first place in front of two other Trojan Bolt teams to sweep the first event of the meet.

Christensen coming off a stellar sophomore year got right back to work with a win in the 200 IM with a time of 2:04.76.

Carter made a name for himself early as he hopes to be a key piece in the boys swim team’s plans to making an appearance at the CRWC in February. Carter won the 100 butterfly with a time of 51.44 and the 100 backstroke with a time of 55.76.

To cap off the teams dominating win the 400 free relay team of newcomer Max Gerke ’24, Carter, Boyd Skelley ’22 and Christensen took yet another first-place finish with a time of 3:27.08.

Byron Butler’s Trojan Bolts are hoping to get some more time in the pool practicing as a team but will be back competing Dec. 22 in a dual meet against Cedar Falls.