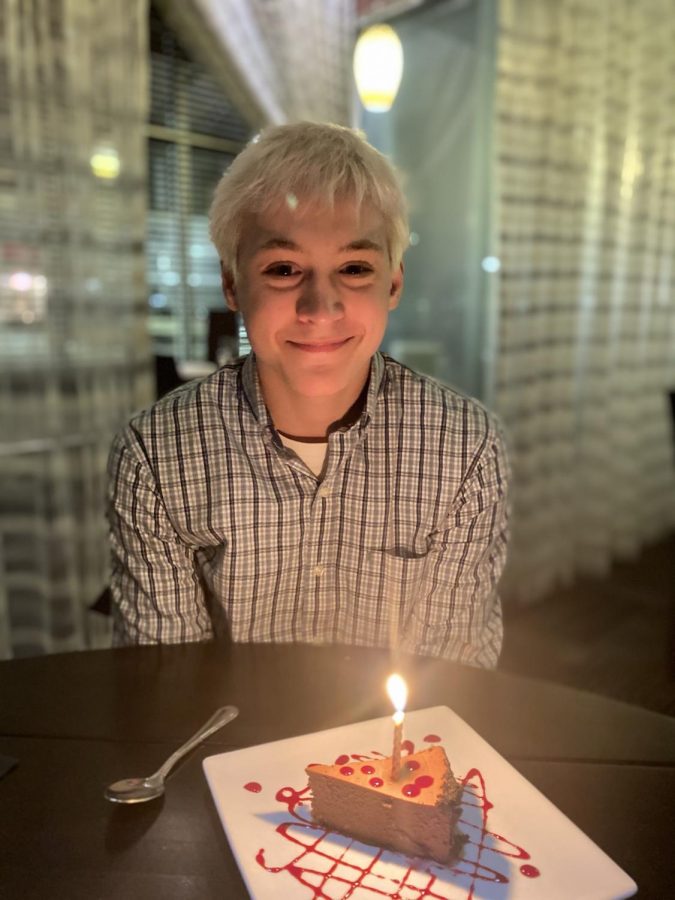 Photo courtesy of the Salge family

For many who knew Dylan Salge ’23, that was one of his many memorable qualities.

“He had a really great laugh; it was one of my favorite things. In class … he typically just sat down and listened to his music … but outside of class, he was a completely different person. He was a lot brighter, and he was a lot of fun outside of class to talk to,” said Ava Reed ’23, a friend of Dylan’s. “We were always able to make jokes. He had a really playful personality.”

Dylan’s presence had a positive impact on others.

“He loved talking about his favorite show, ‘Bojack Horseman,’ to anyone and everyone … The way his energy level would change when you started talking about the show was so fun to watch,” said Abbey Schley ’22, a friend of Dylan’s. “Since I started watching that show for him, I told him that to pay me back, he should try ‘Grey’s Anatomy.’ He said, ‘That’s never going to happen … nope!’ That’s one of my favorite memories of him — it never fails to make me smile.”

Alongside his passion for the things he loved, Schley appreciated his caring heart.

“One time I was Snapchatting [with] him, and I had been crying a few minutes before responding to him. I thought I had cleaned myself up pretty well, but Dylan noticed that I wasn’t myself and immediately asked, ‘Hey, what’s wrong?’” Schley said. “It meant a lot that he checked on me, because that night, no one else did. I’m sure he did this to many others, too.”

No matter the circumstances, Dylan was always there for his friends.

“Dylan was such a bright light in so many people’s lives. He could always tell when something wasn’t right with me when not even my own family could really tell,” Schley said. “He constantly would check on people and genuinely cared that people were okay. When he asked you how you were or what was wrong, he really meant it, and that was something so special about him.”

Some remembered him as a caring friend, while others remembered him as a dedicated teammate — many knew he was both. Dylan found his love for the water when he was in Hawaii and became a certified scuba diver at the age of 10. He was an avid swimmer for the Iowa Flyers swim club and the West High boys swim team.

“He was super driven to the sport, and it was his one passion that I knew that he had … it was really nice to see him just light [up] whenever he got into the pool, or whenever he got better,” said teammate Jordan Christensen ’22. “He was always friends with the water, he was in it all the time. He had a special connection to it.”

His teammates weren’t the only ones who noticed his affinity for the water. Boys swimming head coach Byron Butler coached Dylan since his freshman year.

“You could tell that he enjoyed his time there,” Butler said. “He was just competitive. He always wanted more even when he had a really good swim; he sometimes looked down on himself which he shouldn’t have, but that’s part of the sport and part of being content with things.”

Whenever Dylan had the chance, he would ask countless questions to his teammates and coaches. Whether it was about biology, the swim set or the coach’s personal life, Dylan never failed to come up with something new to be curious about. His inquisitive personality was something that Butler found special about Dylan.

“We gave him a quota of he only gets to ask each coach three questions a day, and once he was done with those, he had to figure it out from one of his teammates,” Butler said. “[He] was very curious and always wanted to know more.”

Dylan was willing to do anything for his teammates.

“The priority is always scoring points for the team, and I think that was always in the back of his mind, and it says a lot about who he was and the type of teammate he was,” Butler said. “He wanted what was best for everyone else, but he also wanted to beat everyone else.”

“He was that kind of kid who would not talk about his goals openly but … in his mind and always used that before his races to motivate himself,” Sung said.

Above being a competitive athlete and caring teammate, his contagious smile and legacy will live on at West.

“He was goofy. He would make sarcastic jokes all the time about everybody, and it was just always fun to be around [him] and made everybody smile,” Christensen said. “He was just a great person to be around to see [and] to watch him swim. It was just amazing to have him around.”