The boys soccer team defeated Liberty High 5-0 on April 13 to improve to 4-1 on the year. 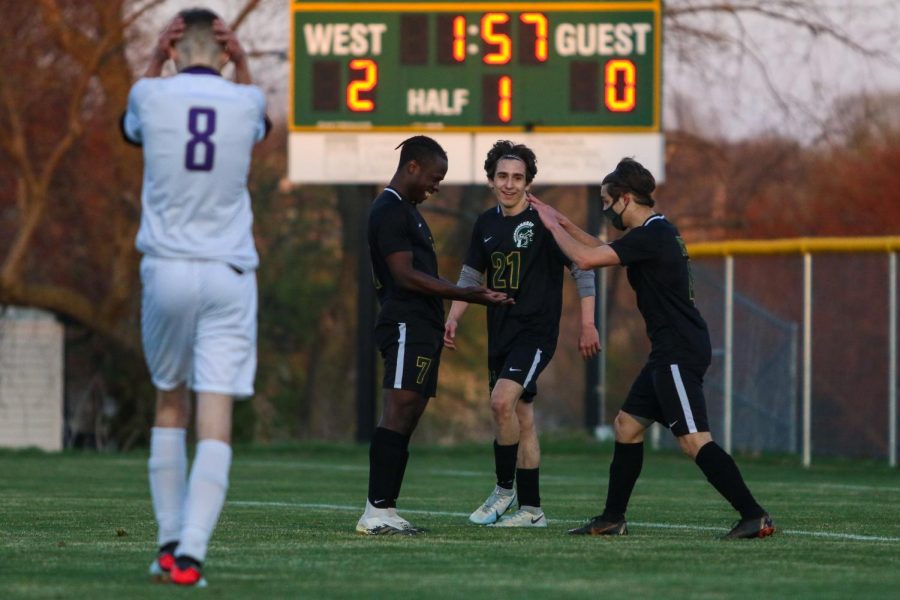 Miguel Cohen Suarez '22, Michael Nelson '23 and Marko Migambi '21 celebrate a goal towards the end of the first half against Liberty on April 13.

Despite the strong winds, the boys soccer team crushed the Liberty Lightning 5-0 on April 13. Within the first five minutes of the first half, junior Teo Gonzalez scored, which was closely followed by a goal from Andy Lu ’21, which gave the Trojans an early lead.

Aggressive offense from Miguel Cohen Suarez ’22 allowed him score within the last two minutes of the first half, leaving the score at 3-0 with the Trojans in the lead.

Senior Marko Migambi scored in the second half along with sophomore Michael Nelson. The two wrapped up the game and got the final score to 5-0. This score couldn’t have been possible without a strong defensive performance, including goalkeeper Richard Wu ’24, who made this game his first varsity shutout in his high school career.

The boys soccer team will play against Muscatine on April 16 at the Muscatine Soccer Complex.