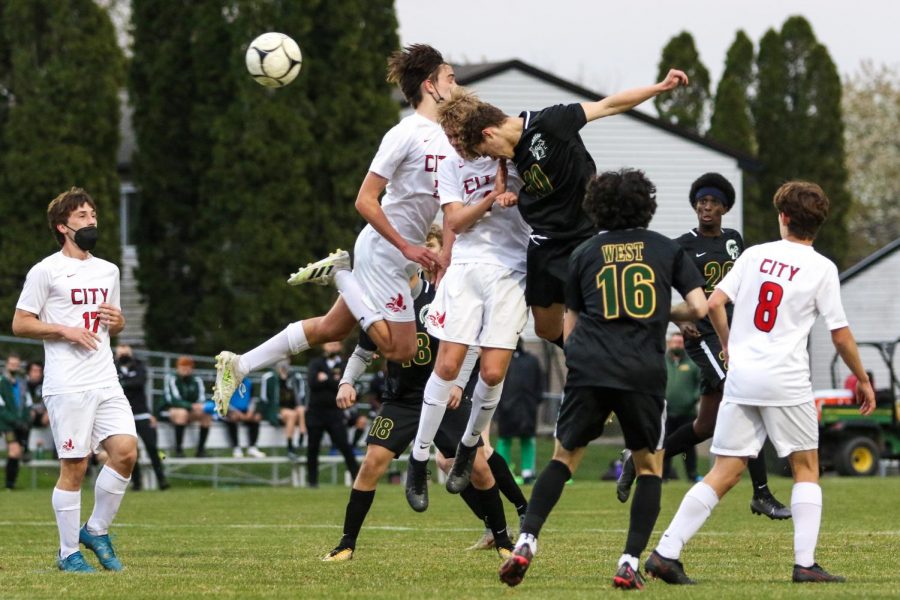 Owen Smith '21 heads the ball into the back of the net to put the Trojans up 2-0 against City High at Ed Barker Field on April 23.

For any high school sports team, beating a cross-town rival is a memorable experience.

Both the boys and girls team did just that this week after the boys team took control over the Little Hawks 3-1 in a highly-anticipated game against City on April 23. Brad Stiles’ squad extended their winning streak to five and improved their record to 7-1.

It only took seven minutes for the Trojans to get up in their attacking half to score the first goal. Michael Nelson ’23 got the Trojans up on the scoreboard first with a one-touch finish on the goal with an assist from Kolby Godbolt ’21.

Senior defender Owen Smith scored off a cross and headed the ball into the back of the net with 20:30 left in the first half. The two early goals from West didn’t slow down the Little Hawks. After halftime, City began to attack and closed down the score gap to 2-1 with a goal from City High sophomore Alima Mmunga with three minutes into the second half. West goalkeeper Nick McDonnell ’22 swept away goal opportunities for the Little Hawks with multiple saves throughout the game.

Godbolt’s left foot strike off the pass from Brendan Klutts ’21 went past the City High goalkeeper seven minutes left in the game to secure the 3-1 win over the Little Hawks.

The boys soccer team will be back on the Ed Barker field against Cedar Rapids Kennedy next Tuesday.