West High senior Aurora Roghair qualifed for the U.S Olympic Trials in the 200, 400 and 1500 meter freestyle at the TYR 18 & Under Spring Cup in Des Moines. 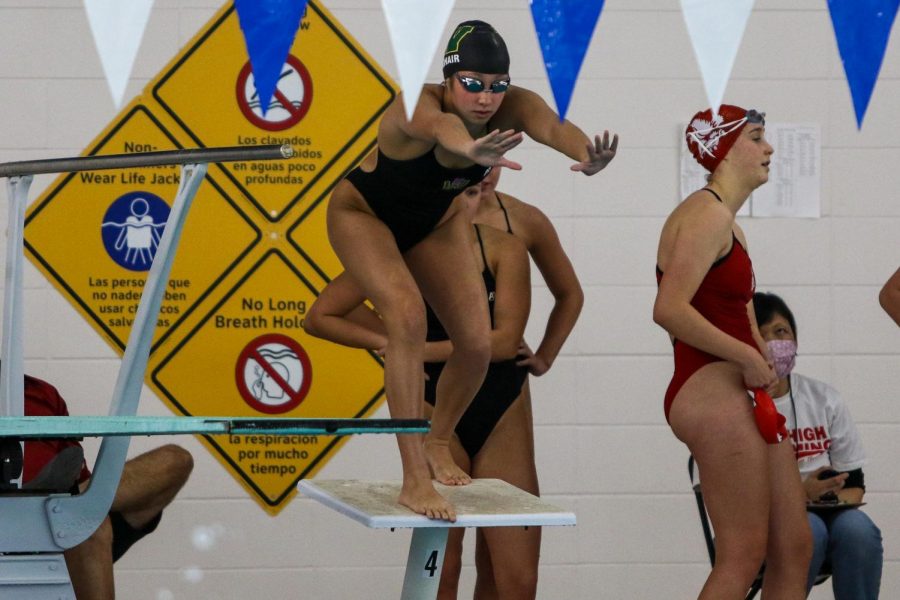 Aurora Roghair '21 waits to jump into the water to swim her leg of the 400 freestyle relay at the Mercer Park Aquatic Center on Oct. 17.

After finishing off the last high school meet of her career with two state records and four state championships on Nov. 14, Stanford University commit Aurora Roghair went right back to work in the pool with the Iowa Flyers Swim Club with one goal in mind: the Olympic trials.

Roghair and her IFLY teammates made the trip to Des Moines this weekend to compete in the TYR 18 and Under Spring Cup in hopes of hitting some U.S Olympic Trials cut times.

Roghair will compete for a chance to be a part of the Olympic team in Omaha, Nebraska from June 4-7 in the Wave I Olympic Swimming Trials.

“When I touched the wall [after the 200 freestyle] I knew it would be close. I couldn’t really see the scoreboard, but I heard a lot of yelling and cheering and knew right away,” Roghair said. “When I actually got a look at the board it was the exact time of the cut which was really crazy. I was really happy when I found out and turned to my friends and coach and felt so much support, I couldn’t have done it without all of them.”

An Olympic Trials cut was something Roghair had her eyes on for a while, and now she will have the opportunity to separate herself once again as not only one of the best swimmers in the state, but in the nation.

“Going into the meet I was really focused and hoping to get my trials cut. It’s been a big goal of mine for the last two years so it feels amazing to have gotten it now,” Roghair said. “I am most looking forward to the experience of the Olympic Trials. It’s such a different environment and hype and I’m so excited to race against really fast competition and to see people I know kill it.”