Nathan Weimar argues for why standardized tests should not be considered by colleges in admissions decisions. 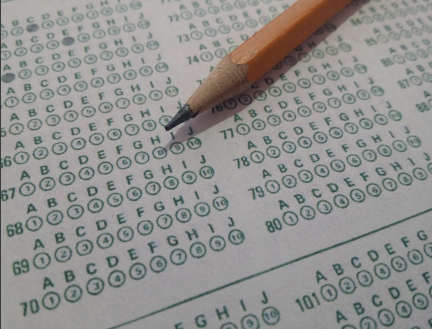 You’re in the gym with your number two pencils ready. The lights blare down on you as you stare at your test packet. You feel the sting in your eyes from staying up all night to cram. You are about to take the SAT or ACT the most important test of your life. For most highschool students this scenario will at some point become a reality. They will have to spend many painful hours studying vocabulary and calculus, just to raise their score. However, colleges should not consider standardized test scores in their admission process. They hinder actual education, don’t effectively measure how much a student knows, and are biased. 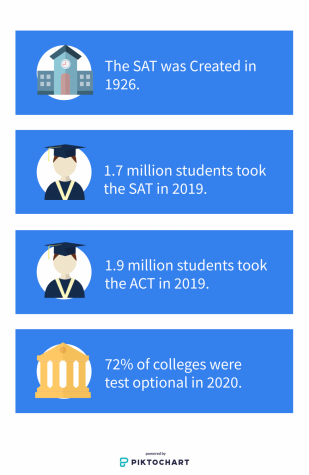 Firstly, standardized tests are bad for genuine education. They create an environment in which teachers feel like they have to teach to the test. This is because test scores supposedly reflect how good a teacher is, which makes teachers more focused on boosting their students’ scores than making their students actually learn. It becomes disadvantageous for teachers to try new things because if students don’t learn all of the standardized material their test scores could be affected. Instead of tests serving as a way to teach students they become the point of education. “When standardized tests are the most important thing, the fostering of critical thinking in the classroom gets short shrift.” Ron Maggiano, winner of the 2005 Disney Teacher Award said.

Even while the entire goal of education has shifted towards them, standardized tests don’t even do a good job of measuring someones intelligence. Standardized tests are one test that is supposed to gauge someone’s entire high school career. Placing so much value on one test is simply unfair to students, who work incredibly hard. If someone has an off day on the day of their test, that should not destroy their college prospects. A lot of people are very smart but have test anxiety, and as a result, do worse on standardized tests. It’s unfair to say they are less deserving to go to a certain college because they were stressed when taking the SAT.

Lastly, standardized tests are biased towards the most privileged students. Students with more resources do better on standardized tests because they can pay for things like prep courses, or the PSAT. These sorts of advantages don’t represent how smart or hardworking someone is. Someone should not be prevented from attending a certain college because they couldn’t afford a tutor while some of their peers could. Standardized tests are also racially biased. The average SAT score of African Americans in 2018 was 946 while the average score of Asians was 1,223, and the average score of whites was 1,123.3. 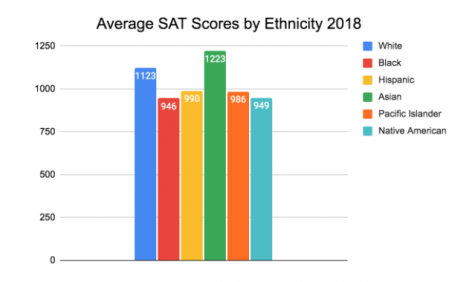 While these all seem like glaring issues a lot of people still support standardized testing. Some argue that standardized tests are the most fair system because everyone is taking the same test4. However, even though the test is the same for everyone, the opportunity to succeed on it is not. It is in no way objective that certain students are hindered from attending a college because of their resources or their test anxiety. Another argument for standardized tests is that they are a way for colleges to compare students directly4. However, if the data is skewed, the comparison of it is not a good thing. If tests favor certain students, using test scores to determine who is better is not desirable. Others argue that standardized tests hold schools accountable4. This is misguided because forcing students to memorize random facts and then take a skewed test is an actively harmful way to measure a school. The point of teaching is to foster critical thinking and creativity, not to teach to a test.

Thus, standardized tests need to be considered much less or not at all in admissions decisions. School’s should instead consider things like student’s GPAs, extracurriculars, and their overall resumes as opposed to one moment in their lives. It is simply unacceptable to use a system that arbitrarily favors some students, while simultaneously killing education. There needs to be serious reform. Tests need to be changed to be less biased and facilitate better learning. The only way colleges are going to do this is if the public cares about the issue. The coronavirus aided in this process in 2020. 72% of colleges became test optional due to the pandemic which prevented a lot of students from taking the SAT and ACT 5. Test optional, where colleges don’t count it against you if you choose not to send them your test scores, has shown to be a successful way to alleviate the issues of standardized testing. For example, at Wake Forest,  before the college was test optional in 2009, 18% of its students were nonwhite. That number rose to 30% in 2015.6 This trend of more test optional schools needs to continue after the pandemic. There needs to be more of a push for solutions like these, because we can’t continue to idolize a fundamentally broken testing system.